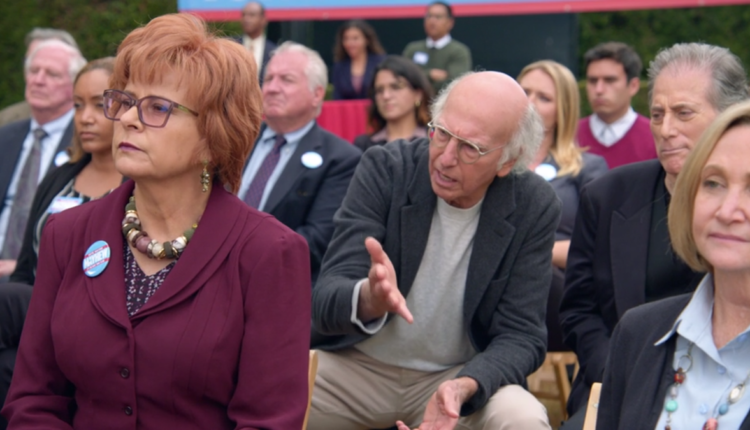 It certainly doesn’t happen every day that Larry David’s selfishness affects the future of an entire city. Maybe that’s the reason Control your enthusiasm doesn’t let Larry do too much politics. The consequences would be too chaotic.

In this week’s episode, titled “Irma Kostroski,” at least 50% of Santa Monica voters put their hopes in upbeat mayoral candidate Jimmy Mayhew (Terrell Clayton) – a number that apparently includes door-to-door door-to-door advertising Larry himself for Mayhew for reasons that never really solidify at the end of the episode. (Maybe it’s an infatuation with loathing? We’ll get to that.) Not that Larry’s sudden political bloom really matters; He believes it is too much to ask in a long line to vote for Mayhew and he decides to skip the election altogether.

To do him credit, not necessarily because it’s due, Larry takes an opposition vote just to straighten things out. This algebra so naturally makes sense in Larry’s warped mind, in the equally warped setup-punchline-bizarre world of Curb, that Mayhew’s choice is destined to be the most historically significant squeaker of all, with Mayhew’s inevitable loss being attributed to a single vote . Would things have been different for Jimmy Mayhew (and all those future Santa Monica henhouse owners) if Larry and his presumably Republican counterpart had stayed to cast their vote? The actual math doesn’t seem to back this up, but the election results would never stop Larry from giving up his civic duty.

The exploration of Larry’s crazy principles is a well-trodden path for Curb Your Enthusiasm and certainly the thorniest sticking point of “Irma Kostroski”, at least to show how one-sided his principles always seem to be. On the one hand, Larry cannot vote. On the flip side, he makes a point of calling a grieving widow (okay, a widow who has once been removed) in front of about 60 people for believing she is abusing her “widow’s privilege” and blaming her and her allegedly excessive grief for taking away one of his precious golf lessons and the opportunity to enjoy a lobster lunch. (Really thwarted Larry’s chance to make up for his disappointing no-anchovy Caesar salad last week.)

Richard Lewis, bless his tormented heart, points out Larry’s lopsided grasp of priorities. “You can sit here (‘here’ is Susie’s stump for Jimmy Mayhew), but you can’t go to Broadway if I’m selling out show after show for 10 weeks.” (Sidebar: I’d kill to see this show.) You will recall that Larry and Jeff spent some off-screen time in New York City this season, long enough to warrant the need Larry’s three problematic pieces of luggage, but he didn’t take an evening to support his long-suffering friend Richie?

What’s important to Lewis doesn’t matter to Larry, a moral polarity that was clearly established in 11 seasons of Curb Your Enthusiasm. Lewis is an artist and wants to share his gifts with the people he loves. Larry doesn’t. He is reluctant to commit and scoffs at people who openly call themselves artists. “I don’t do things to invite you, but you do things that you invite me to,” he tells Lewis, which leads Lewis to reveal his wonderfully hyperbolic (and not entirely implausible) hypothesis: “You hate people. “

Does Larry hate people? He later posits a response to this accusation when it is repeated by Cheryl, someone who really knows what’s lurking in Larry’s heart (shuffles?) “I hate people individually, but I love humanity.” That is probably not entirely true, and even that claim will be tested in the end before this week’s episode ends; Humanity, or a Santa Monica-based and politically motivated contingent of humanity, turns against Larry for being so selfish with his time and for things get ugly.

Perhaps that is why Larry is strangely fascinated by Irma Kostroski of the same name (an insanely unpleasant Tracey Ullman). He describes the councilor as “the worst aspects of 10 different people”, putting Frankenstein together into a “repulsive” person. Larry alone finds them unbearable. But as the sum of 10 different horrible people? According to Larry’s own logic, there is something that can be respected, maybe even admired. “For some reason, inexplicably, I’m drawn to what repulses me,” he says to Susie, while Irma eats quiche and cucumbers just a few meters away. (Susie rightly suspects an ulterior motive.)

Whatever Larry feels about Irma, it should be ambiguous. (Tracey Ullman will be over next week as well, and it looks like Larry has finished with a bouquet of flowers. Explanations follow.) Less ambiguous are Larry’s feelings about Asa (Jon Rudnitsky), the incorrigible villain who was tapped to play along Larry’s semi-autobiographical Hulu-produced sitcom Young Larry. Like Richard Lewis, Asa considers himself an artist, which makes Larry scorn, and he insists on being addressed as “Larry” by his colleagues, which is almost certainly a power move on his part. Other prima donna inflections from Asa include criticism of prop master Stan’s choice for glasses and corn-puff snacks. (Glenn Keogh’s tightly-knit appearance failed me. There is murder in Stan’s heart, and Keogh put it there with merciless joy.)

What about Asa? Larry believes his asshole-like demeanor can be traced back to when Asa was molested by a 37-year-old Italian model actress and he sued her for a $ 400,000 settlement. Of course, Larry doesn’t see Asa’s trauma as legitimate (and virtually no other guy in the episode, including a hilariously over-zealous 18-year-old voter) since he believes any 17-year-old boy would be over the moon to be touched, even by an older woman – or another woman. Maybe Larry is just insensitive to Asa’s problems, maybe he’s taking an inadequate leap in his attempt to understand Asa’s problems with Stan, maybe Asa is using his past for the credibility of “dark artists”. Anyway, Larry and Asa’s change of line in this scene: “What if you were in high school and sleeping with an older, famous actress, how would people treat you?” “They would have named the high school after me . ”- could be the funniest of the season so far.

As season 11 enters its final stages, it feels like Curb Your Enthusiasm has finally gotten to a point. The Young Larry arc doesn’t have the same resonance as the season four “The Producers” arc, and (maybe that’s unfair) it didn’t feel as compelling on a character level as the season seven Seinfeld reunion arc. It doesn’t help that “Irma Kostroski” is the least self-contained episode of this season so far, which deliberately avoids moments of catharsis between Asa and Larry, Larry and Irma and, perhaps most importantly (for me at least), Asa and Stan . (With all due respect to the grieving Ruth Berman, did this episode really need that extra detour?) Will Young Larry be a success or will it be a flop? Hardly noticeable this week, when Tracey Ullman was absolutely tearing the scene to pieces, or Stan’s genuine anger at Asa’s “too vegan” corn on the cob. This season, like Larry, would benefit from sorting the priorities.