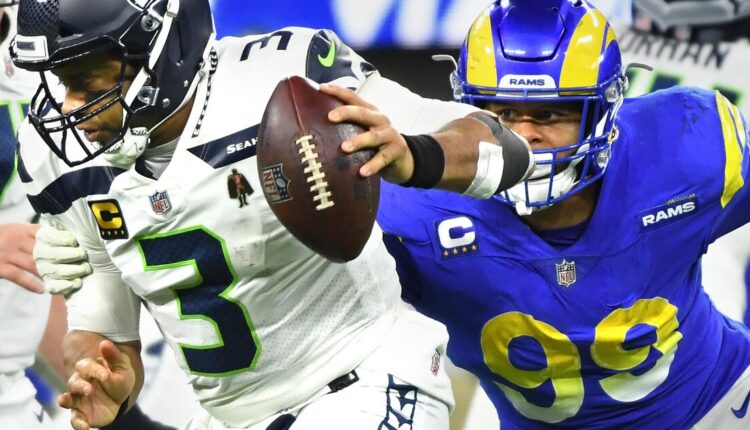 One NFL domino only teetered Tuesday, but another one fell.

Amid news that the Green Bay Packers were putting the final touches on a reported $200-million deal to keep Aaron Rodgers came news that the Seattle Seahawks will trade Russell Wilson to the Denver Broncos.

Rodgers later confirmed on Twitter that he will be playing for the Packers but said the reported terms of the contract were inaccurate.

The Wilson deal, first reported by ESPN’s Adam Schefter, sends the nine-time Pro Bowl selection to the Broncos in exchange for a “significant package” of picks and/or players.

Both Los Angeles teams are impacted, as Wilson will be leaving the Rams’ division and joining that of the Chargers, which now boasts a formidable starting foursome of Justin Herbert, Patrick Mahomes, Derek Carr and Wilson, who collected more victories in his first decade than any quarterback in league history.

The day began with a report by the NFL Media’s Ian Rapaport that Rodgers was staying with the Packers and will receive the richest contract in football, a four-year deal averaging $50 million per season with $153 million of that guaranteed.

As recently as last week, Seahawks coach Pete Carroll said the franchise had no intention of making a change at quarterback but conceded teams had made inquiries about Wilson.

Many people believed it would be Rodgers who would wind up in Denver, and that his often tense relationship with the Packers wouldn’t hold up over time. Last month, Hall of Fame running back Terrell Davis was convinced the reigning and four-time NFL Most Valuable Player was bound for Davis’ former team, the Broncos.

“Everything I’ve heard for the last year has all been Aaron Rodgers is coming to Denver,” Davis told the Los Angeles Times during Super Bowl week. “I’ve heard from insiders and guys that I know who has covered the Broncos for many years, guys who covered the NFL, guys who have been involved in actual details of that trade who say that it’s basically going to happen. Like, Aaron is coming to Denver.”

Instead, another Super Bowl-winning quarterback is on his way and looking to recapture the magic that Peyton Manning created when he spent the final four seasons of his career in Denver, from 2012-15. Manning reached two Super Bowls with the Broncos, losing one to Wilson and the Seahawks before finishing his Hall of Fame career by beating the Carolina Panthers in Super Bowl 50.