Sculptor fights to save public works of art under the pier 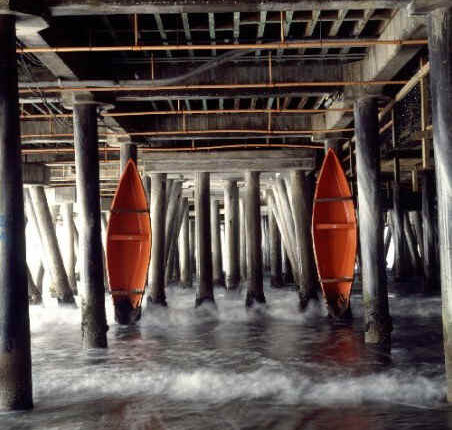 September 9, 2021 – For more than 20 years, three orange boats have been strapped to stakes under Santa Monica Pier in an effort to save the planet.

Now the change is about to sweep away the environmental art installation created in 1998 by the sculptor Manfred Müller with the title “Twilight and Longing”.

Müller – whose sculptures have been widely exhibited – has launched a campaign to save the artwork, which the city plans to remove, citing security concerns and the closure of this once public space.

The message of the installation is intended to draw attention to the pollution of the seas and impending “environmental disasters” and is more urgent than ever in “a time of extreme desperation”, wrote Müller in a letter in which he urged supporters to send an email to the city administration to send.

“These three boats, tied vertically to their posts now sunken in the sand, speak for themselves in the context of this environmental crisis,” wrote the artist.

Müller’s appointment comes after the art commission and the city’s cultural office have “retired” the work of art.

“The sand has risen and the area under the pier has changed so people cannot access the artwork,” said Constance Farrell, the city’s public information officer.

Müller said he had filed several appeals and “suggested ideas on how to secure the beautiful space under the pier.”

“It took me several afternoons to get estimates of better lighting and security systems, but in the end it was like talking to the wind,” he wrote in his letter asking for assistance.

“When it was first installed, it was clear that the city would do its part to keep this space safe and secure.”

“Since the [installation’s] Burial in the sand has created a hazard and the site is not open to the public, the city was unable to accommodate it [Müller’s] Request, “wrote Agle in a statement.

Agle said the city hopes to hire Müller to document the history of the project and “contextualize” the issues.

“With the support of the city, the artist is preparing a proposal for a documentary to be presented online and we look forward to seeing this happen in the near future.”

Farrell said Agle’s decision to decline the appeals is in place. “That’s it,” she said. “That was the last marker in the process.”

Müller claims that the city does not comply with the conditions agreed upon at the time of the donation with the following description:

The boats are not lowered and so returned to their literal function until their symbolic message is perceived and a new sense of responsibility has been translated into measures that begin to reverse the pollution of the ocean and prevent environmental disasters that destroy the elementary cycles that make it life on this globe is possible in the first place.

Müller said that “this part of the original description was also part of the contract … it was not fulfilled.”