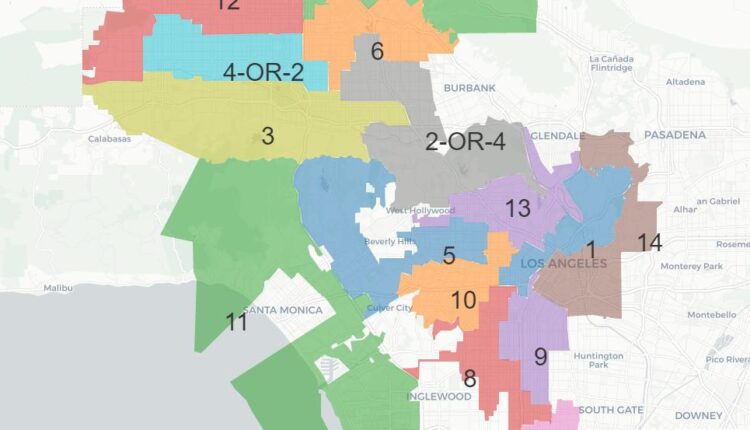 As the Los Angeles City Council Redistricting Commission heads into the home stretch of its assigned work – approving and forwarding to the City Council a recommended draft map of new city council districts by the end of this week – the latest of its meetings, on Saturday, October 16, ran 7 1/2 hours.  And for the first time the discussions focused  mostly on the San Fernando Valley, including both small local border issues and much larger overall issues regarding how council districts in the Valley should be drawn.

As with the last several meetings in the current public input phase, Saturday’s meeting opened with a presentation by a specific community organization, this time the Armenian National Committee of America – Western Region. ANCA-WR representative Edward Barsoumian explained that the Armenian community in Los Angeles has been working since 2011 to unify its stakeholders in as few districts as possible, but while it was largely located in CDs 4 and 13 after the 2000 census, the 2012 redistricting process split the community among five different Council districts, diluting its voice and voting power. And this has become increasingly concerning, Barsoumian said, as safety issues such as anti-Armenian hate crimes have increased in recent years.

Barsoumian said the current proposed Draft Plan K 2.5 continues to fracture the Armenian communities, dividing the Valley Glen area into three separate districts, and creating new divisions of Armenian population areas in Van Nuys and North Hollywood.   Barsoumian acknowledged that the redistricting Commission has used “heat maps” of Armenian population density to guide its current mapping process, but he pointed out that while heat maps show density, they do not show total population, which can be misleading.  For example, he some of the darkest red areas, indicating the highest percentages of Armenian residents, also have the lowest overall populations…so they’re not necessarily as important for guiding district boundaries as some of the more populous areas which have more Armenian residents but lower overall percentages of Armenian residents (those areas show up as lighter colors on the map).  In other words, Barsoumian said, if a fairly rural area has only two residents, and both of them are Armenian, that area will read as dark red…where an area of 50,000 Armenian residents in an area with a total population of 100,000 would read much lighter pink, even though it would be much more important to look at when drawing lines to keep the greatest number of people together.

Barsoumain said using only heat maps, without also looking at total population numbers, can create even further divisions of a community, as shown in the maps below.

To remedy the situation, Barsoumian requested that the Commission reunite Reseda and Encino in a single council district, unite Shadow Hills and the Sunland-Tujunga area, and return North Hollywood, Valley Glen, Valley Village and part of Van Nuys to the area currently covered by CD 2.

During the 90-minute general public comment period that followed Barsoumian’s presentation, seven Neighborhood Councils and more than 70 individuals addressed other areas of concern, including several issues of particular interest to our local communities.  These included:

Other issues raised by stakeholders from around the city included:

Most of these issues have been mentioned in most of the previous redistricting meetings, but have not yet been fully addressed by commissioners as they continue to adjust map boundaries from meeting to meeting.

Before launching into specific mapping discussions, Commission Chair Fred Ali asked mapping consultant Paul Mitchell to present “equity index” information, and information about rent-burdened populations (households that spend more than 30% of their monthly incomes on rent) across the city…which was information the commissioners had requested in previous meetings to help evaluate some recent public comment claims that the current Draft Plan K 2.5 disenfranchises renters, especially those in the current CD 4, who were largely responsible for electing Councilmember Nithya Raman in 2020.

In response to these requests, Mitchell provided both equity index and  rent burden maps, showing where concentrations of disadvantaged and rent-burdened populations are located.  But he was careful to note that while the maps were drawn using data from the City Controller’s office, and he’s pretty sure the Controller’s Office got the data from federal information sources, he has not yet verified that federal source…a fact that several commissioners took issue with, saying the maps have no value without source information confirmation, and without more specific legends to explain the data displayed, which also weren’t included.

As noted above, the lion’s share of this meeting was devoted to map concerns involving the San Fernando Valley, and whether there should be an overall reimagining of districts in this part of the city, or whether the commission should continue with its current process of looking at smaller individual boundary issues in specific locations in the Valley.

The two commission members lobbying hardest for an overall reimagining of Valley districts were Denis Cagna and Jackie Goldberg, appointed, respectively, by the current CD 2 and CD 4 city councilmembers…who would both see their districts most thoroughly changed in Draft Plan K 2.5.  Commissioner Rachel Torres, representing CD 6, also joined the chorus for large-scale map revisions in the Valley, saying the current plan splits up too many Latin American communities that have been united for many years.  As an alternative, Torres said she likes mapping suggestions created for the Valley by the Labor Council for Latin American Advancement (LCLAA), which would unite both Latin American and many Armenian communities now split under Draft Plan K 2.5.

This suggestion was quickly nixed by Ali, however, who reminded the commissioners that new map submissions were closed on October 1, so new maps cannot be considered at this point, and the only map now under consideration – after a long development process by the commission – is Draft Plan K 2.5.

Commissioner Richard Polanco also reminded commissioners that the group is bound by equity rules set by the Voting Rights Act, and the LCLAA map has not been officially reviewed or vetted for compliance with redistricting requirements, is not available in the current “atlas” of maps available to all commissioners and the public, and appears at first glance to violate several VRA rules.

The debate continued, however, with Goldberg requesting that the commission look at the LCLAA map and Draft Plan K 2.5 side by side, to see if the LCLAA map might provide some good suggestions for amendments to the Draft Plan.  Several commissioners argued against this, however, for the reasons listed above…while others said they would find it helpful to look for potential amendments to Draft Plan K 2.5 in other maps, even if those other maps are not being considered as full-scale alternatives.

The debate about whether or not to allow alternate maps as sources of potential edits to the Valley sections of Draft Plan K 2.5 went on for quite a while.  But Ali eventually closed the conversation, saying “the whole process disturbs me” because it appears to be a “back door to circumvent protocols already established” by the commission. A subsequent vote on whether to allow additional maps as sources of possible amendment to Draft Plan K 2.5 failed by a margin of 6 in favor, 14 opposed, and one abstention.

As discussions of more specific Valley map edits continued, however, the topic of whether to do a major re-drawing of Valley districts resumed, with Cagna eventually moving that the commission swap in Valley districts as outlined several weeks earlier in its own Draft Plan B2 (while leaving Districts south of the Hollywood Hills as drawn in Draft Plan K 2.5).  But after another vote, this motion, too, was defeated by a margin of 4 votes in favor, 13 votes opposed, and 3 abstentions.

Before, during and after the debates about whether or not to fully re-draw Valley district boundaries, the Commission did address several specific territory and boundary issues within the Valley. These included:

A few other discussions, however, such as whether or not to return the Sepulveda Basin area to CD 6 (from which it was removed at the last meeting), were tabled for further discussion at upcoming meetings.

The Valley revisions accepted so far were added to a new map – Draft Plan K 2.5 Amendment 2 – which is now available online, and which will provide the base for continuing discussion at the commission’s next meeting tonight.  Its remaining meetings include:

All of the meetings will start at 6 p.m., and all are being held online at the same Zoom link.

Topic that are yet to be resolved, still very much open for public comment, and likely to be discussed either tonight or Wednesday night include:

Video of Saturday’s meeting is available at here.