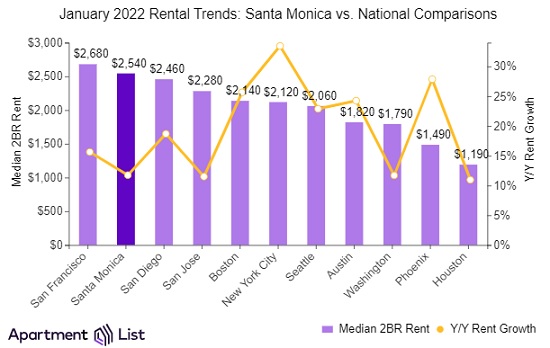 The 0.5 percent dip came after rents dropped 2.8 percent in December and 1.8 percent in November, based on listings posted on the popular rental site.

“Even though month-over-month growth has moved back into positive territory, rent growth has still cooled substantially from last year’s peak,” researchers wrote.

“Consistent with this environment,” they added, “our national vacancy index is also continuing to gradually tick up, indicating that the tight market conditions that characterized 2021 are easing, albeit slowly.”

Despite the three-month decline, local rents have risen 11.7 percent over the past year, according to Apartment List data.

That is still below the 17.8 jump in median rents nationwide and the 16 percent hike in California over the past year.

While rents nationwide decreased by 1.4 percent between January 2020 and January 2021, “the staggering growth of 2021 more than made up for the lost ground,” Apartment List researchers wrote.

In fact, “rent growth over the past year has far outpaced that of any prior year in our estimates, which go back to 2017,” they wrote.

Despite the recent decreases in Santa Monica, the city’s median rent of $2,544 for a two-bedroom is about double the national average of $1,285.

Among California cities, San Francisco (with a median rent of $2,680) and Irvine and Santa Clarita in the Los Angeles region (with median rents of $3,560 and $2,690 respectively) were more expensive than Santa Monica.

The current median rent for a two-bedroom in Los Angeles was $2,260.

The increase in vacancies and general cooling in the rental market may prove little consolation for renters, the researchers said.

“Despite a recent cool-down, many American renters are likely to remain burdened throughout 2022 by historically high housing costs,” the report concluded.

Apartment List Rent Report data is drawn monthly from the millions of listings on the site, according to the website.

The report calculates one-bedroom and two-bedroom rents and aims to identify transacted rent prices, as opposed to the listed rent prices. To view the full report click here.