Santa Monica is having a Michelin moment 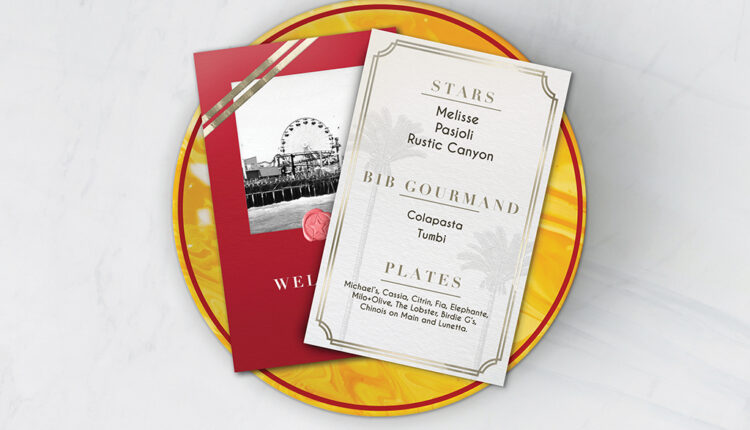 Santa Monica has long enjoyed a reputation for being a gourmet, but after three rounds of closings, evaporation of tourists, and an ever-changing sea of ​​health regulations, the return of the Michelin awards in 2021 feels much more meaningful for local chefs.

Head chef Josiah Citrin from his hometown, whose intimate restaurant with 14 seats with tasting menus Melissa has earned two stars, is at the forefront of the culinary honor roll. It is held in good company by Chef Andy Doubrava and Chef Jeremy Fox of Rustic Canyon and Chef Dave Beran of Pasjoli, whose restaurants each have earned one star.

All three upscale restaurants share a passion for seasonality, creativity, and an unwavering dedication to sourcing the best ingredients from the Santa Monica Farmers Market and beyond.

The Indian restaurant TUMBI and the Italian restaurant Colapasta both received the prestigious Michelin Bib Gourmand award, which recognizes exceptional food at a price that won’t break the bank.

Ten other restaurants in Santa Monica received a Michelin Plate award, which, while a less competitive award, still recognizes very high quality food. These include three restaurants of the Rustic Canyon Family – Milo + Olive, Birdie G’s and Cassia – in addition to Citrin, Fia, Elephante, The Lobster, Chinois on Main, Lunetta and Michael’s.

While locals are already familiar with the city’s culinary prowess, these awards are valuable in attracting foodies from afar and are gaining traction given the need to recover the city’s tourism revenue.

“The Michelin-starred restaurants in our community show that Santa Monica is a world-class culinary destination with diverse and creative chefs,” said Misti Kerns, President and CEO of Santa Monica Travel and Tourism. “A resilient and exciting food scene is a draw for tourism, and as we continue to recover from the economic downturn, our renowned restaurants, bars, and farmers markets are attracting visitors whether they are here to eat or to stay.”

The pandemic also increased the importance of these awards for local restaurants.

While in previous years the awarding of a star was met with smug satisfaction from the chefs who know they are showing their skills, this year’s Star Award winners mainly expressed feelings of relief and gratitude.

These chefs, along with restaurant staff across the state, spent much of the past eighteen months on survival mode as they tried to keep their businesses afloat through the changing landscape of pandemic challenges.

“We tried to make something to take away, we tried to sell cheesecake to get the staff on health insurance, it was a mess,” said Pasjoli boss Dave Beran. “If someone came by and said, ‘I’ll give you $ 10 for your shoe,’ I would probably have given it to make sure the door stayed open.”

Pasjoli went through several iterations during the pandemic, from take away only to just outside, and introduced a new brunch service to attract more customers. Waiters had to rethink their approach to the French fine dining experience as they were not allowed to pour wine on the side of the table or change people’s cutlery at various times.

“Someone comes in and says that you are up to certain standards to be recognized in this regard, which shows that all the resilience and commitment of the team has been taken,” said Beran. “It’s quite a rewarding thing to do to get a star from all of this.”

While for Beran the importance of a Michelin star took a back seat to the importance of the company’s survival, head chef Josiah Citrin from the two-star Hotel Melisse saw the two concerns as more closely intertwined.

“It is important to have Michelin stars in order to attract customers and certain types of guests who like this type of food. That’s how they judge the restaurant, ”said Citrin. “I was concentrating on that the whole time. That was always the goal of getting Michelin stars. “

The modern Californian restaurant Melisse is one of the best dining experiences in Santa Monica, offering ten course, two and a half hours long dining experiences that, when paired with wine, can cost around $ 500 per person. It shares a dining room with Citrins aptly named la carte restaurant Citrin, which has received a Michelin Plate Award.

While many degustation menu-style restaurants closed their doors for long periods of the pandemic, citrin kept Melissa going at every opportunity with takeaway degustation menus, meal sets and the construction of a new alfresco dining area.

All along, citrine tried to ensure that lemon balm and citrine avoid the excessive mustiness that plagues some Michelin restaurants, and keep themselves a sense of fun with plates like lobster toast and dirty chicken wings. The latter dish served as inspiration for a fast-casual chicken restaurant that Citrin will open on Main Street later this year.

Over in Rustic Canyon, Chef Andy Doubrava breathed a sigh of relief when he found out that the restaurant had again received a star.

“My biggest fear was that I would somehow lose it and what we would do afterwards,” said Doubrava. “To see all the emotions come through with all of our younger team members who were not here the first time and the pride among the team members who have been here the whole time is just a great thing.”

Doubrava said the intense seasonal focus of Rustic Canyon made the kitchen team used to breaking new ground, but that the pandemic really drove the depths of its flexibility. Although the restaurant managed to get the takeout and al fresco dining to work, Doubrava is delighted to see people back in the dining room, both for the energy they bring to the eatery and the possibility, people’s reaction to watch when they try a new dish.

“Oh my god so lucky, it felt like a star to me, it’s amazing. It’s just so beautiful. It made us forget all the crazy times and all the challenges, ”said de Lorenzo.

De Lorenzo proudly handcrafts every piece of pasta served at Colapasta, dedicating six to eight hours a day to it. During the pandemic, he relied on customer loyalty to keep the small family business going and is particularly grateful for the dedication of his teenage son who tirelessly took orders from the restaurant and packed his take-away.

The Michelin Plate Awards this year were also very special for local chefs as the vague definition of the award – which is to recognize restaurants that “just serve good food” – makes it difficult to predict which establishments will be selected.

“We always fly under the radar for these kinds of honors, and it means so much that someone really sees us for the hard work we put into making huge amounts of amazing food and take-away,” said Eastland. “It really is an affair of the heart and it is such a good feeling to have this recognized by the great!”