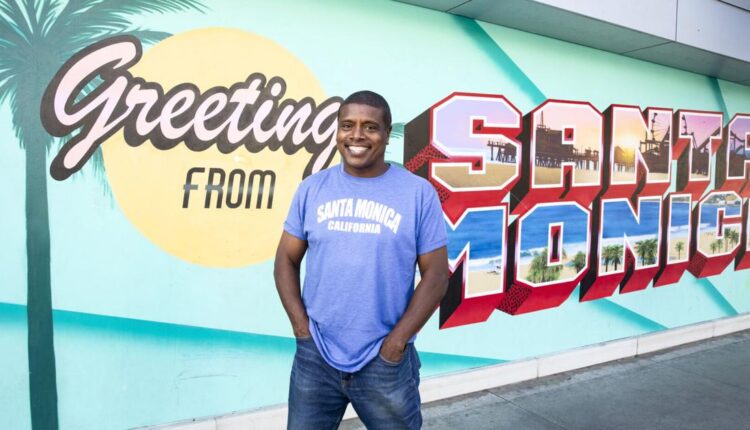 When she was working on this “big, low-budget film” — “Black Panther” — she thought of him immediately for a stuntman role.

“We played baseball together growing up,” she said. “I knew he was doing stunts. He was an athlete. I reached out to him because we were looking for Black stuntmen who could handle this. I asked him if he was still into it, if he was available and if he was interested. Hey what.”

Todd, who still resides in Santa Monica, returned to Marvel Cinematic Universe to play one of the king’s guards in “Black Panther: Wakanda Forever,” which opened Nov. 11.

He finds it amazing that he’s been a part of films like this. As of Nov. 20, “Black Panther: Wakanda Forever” has grossed $287.2 million in the United States and Canada, and $258.3 million in other territories, for a worldwide total of $545.5 million.

“I just love it because if the team does well, we all do well,” Todd said. “I don’t need to be front and center. This is for the screen credit. My little niece and nephews, that’s for life.”

Todd said it was a pleasure to work with Chadwick Boseman on “Black Panther.” The award-winning actor died after the film of colon cancer.

“We had to go to training every day from 6 am to 6 pm with a one-hour break. We would finish and he would do extra. He had that one-on-one training. He’s a star, but he was very nice to everyone. No one knew that he was sick. It shocked everyone. When we came back for reshoots, you could tell he was a little lighter, but you lose muscle mass when you’re not using it. I didn’t think anything of it. When we got the news, it was so heartbreaking. We lost our leaders.”

Working on “Wakanda Forever” was bittersweet and the set had a very different vibe, he said.

“Everybody’s minds, of course, were still on Chadwick, but we knew we had a job to do,” Todd said.

“We wanted to fulfill the commitment of working and getting the job done. I’m so grateful just to be a part of the franchise and Marvel. Seeing my name in the credits was incredible.”

Born at Santa Monica Hospital, Todd attended John Adams Junior and Santa Monica High schools. Repeated sports injuries in high school and college killed his dream of playing professional baseball or football, even though recruited by schools around the nation.

To stay motivated, he keeps his USC letter of intent.

One day, returning home from a Planet Hollywood opening, Todd and his friend drove through a park where they used to play Pony and Colt League Baseball. More than 250 people were on the diamond.

“All of a sudden, he pulls over to see what’s going on,” recalled Todd, who does video interviews for Topps Baseball Cards.

“My buddy takes me home, I put on my uniform from college, came back and asked if I could audition,” Todd said with a laugh.

Todd persisted, and as he was walking away, they asked if he could play.

“They were giving everybody like 10 swings,” he said. “They gave me five. The first four were over the fence. The last one line drive off the fence, they told me to run to first base. That’s what brothers do. We can run a little bit. I didn’t stop at first. I ran all the way home. They asked me to come to Castle Rock the next day, Monday.

“I didn’t know what Castle Rock was.”

After a few trial reads, Todd was told to stop reading.

“Ever been to Minnesota?” they asked. “I said, ‘I know Kirby Puckett is there.’ I got the part of Mickey Scales, and that’s how I started acting.”

Since then, Todd had a recurring role as Officer Kettles in the Charlie Sheen comedy series “Anger Management,” which aired on FX Networks.

“Being an ex-ballplayer, we’ve all been there,” Todd started. “You get down on yourself, but one thing was taken away and I was able to portray all these different characters on film. I still get to go to sporting events. i love it I get to travel.

“I still have the same friends I grew up with. We all stick together.”

His classmates included Yvette Le Bowser; Karyn Parsons, who played Hilary on “The Fresh Prince of Bel-Air;” musicians Lenny Kravitz; and actors Dean Cain, Holly Robinson, Rob Lowe, Emilio Estevez and Sean Penn. Some of them still get together as part of the monthly Grub Club.

“This is all before they were famous,” he said. “People always tell me, ‘Your life is so interesting — especially growing up in Santa Monica and you’re still there.’ I meet so many people. They call me ‘the connector.’ I connect someone with someone else.”

“For the Santa Monica kids, he really puts himself out there and gives them better and better opportunities with baseball,” Armstrong said.

“It’s so hard to get people to look at you as a high school player. Some don’t have the money to go to certain showcases. He picked up the slack for kids who may not have had the opportunity they ended up getting.

“He’s very well connected within the city. Tony’s very outgoing and a champion of young people. He believes our Santa Monica kids should get more opportunities than they deserve. He’s like, ‘Let’s talk our kids up.’ It’s OK to be a little over the top when it comes to a young person. He’s very good about that.”

Todd — who said he smiles all the time thanks to orthodontist Dr. Alan Bloore — is just giving back.

“That’s what my coaches did for me. They didn’t ask for things. They took me to the park to show me things. Life is just about opportunities, I always say. A lot of kids may not get that opportunity. I make sure they’re prepared for it. I’m not going to put my name on something if I do not thing this person is worth of that.”

“He loves Tony,” Armstrong said. “Not only does he love Tony, he holds Tony in the highest regard in finding top players from Southern California. He calls him his ‘super scout.’”

Reynolds met Todd 20 years ago through a celebrity softball game.

“I do call him my ‘super scout,'” Reynolds added with a laugh. “He knows everything about kids who come out of Southern California. He meets them, knows them, knows their family. From (Giancarlo) Stanton to (Christian) Yelich, he knows all of them.

“His personality is so engaging. I don’t think he’s ever met a stranger. He acts like everybody knows him, and I swear he knows everybody.”

Satriano looks up to Todd and his athleticism, intelligence and kindness.

“He has good principles,” Satriano said. “He’s really athletic and takes athletics to a human level. For me and my wife, he’s like a father figure to our son. He teaches him the ‘heart’ stuff about athletics — how to be a team player, how to have each other’s backs, common courtesy, the respect of other players, to lift each other up.”

“It was so awesome growing up there,” he said. “It was like a melting pot of every race. Everyone tries to divide each other. The way I treat people is no one’s above common courtesy. I live by those words and try to be a great person every day. I just like to make people happy. I want kids to grow up better than I did — and I think I had a pretty good one.”