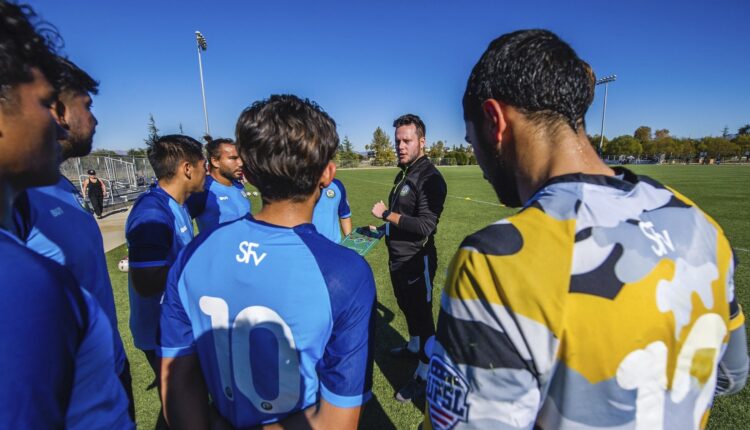 “He saw the same thing I saw: the need to have that connection to the players. Not every player is the same and one coach cannot get to all the players the same,” Cortez said of the budding coaching partnership. “Kyle’s different approach, different personality has been important in the human part and the coaching part, and we complement each other very well. We agree that the way to get the best out of the players is to get to know them.”

San Fernando Valley FC climbed the UPSL SoCal North Division I table during the Fall 2021 season, winning their final five matches to earn promotion to the UPSL SoCal Premier for the first time.

“My message always has been to not get too far ahead of ourselves,” Keenan said. “Just stay humble, stay focused and work for your brothers and the week ahead. It resonates.”

The promotion was a major milestone for the club, which continues to be one of the youngest competing in the UPSL.

“We’re just aligned in our vision of what we want to do [but] it definitely starts with Carlos and Christine behind the scenes,” Keenan admitted. “Their support in this project is so pure that you can feel it. You can feel how much they care about the players as people, and the players know that so it just permeates into the training and into the environment within the team.

With the club’s foundations firmly set, achieving even bigger goals has forced a re-evaluation and the creation of a new way forward.

“Everyone’s got to start somewhere, you know? Then you can build up,” Rivas said.

Cortez’s Valley United under-19 team won the CSL Gold North Bracket back in 2016 with a 9-1-0 record, so they set their eyes on a bigger prize.

When SFV FC won UPSL SoCal North Division I with an unbeaten 9-2-0 record and achieved promotion, it made sense that focus would turn to securing a spot in the US Open Cup proper for the first time in the club’s young history.

Next steps have become necessary for a club that keeps achieving things. In the UPSL, that means winning the SoCal Premier Division and the UPSL National Final. But in terms of the Open Cup, every participant shares the same one-game-at-a-time philosophy.

“Now is the time to dream even bigger,” Cortez said. “We’ve made it here. We can go further now.”