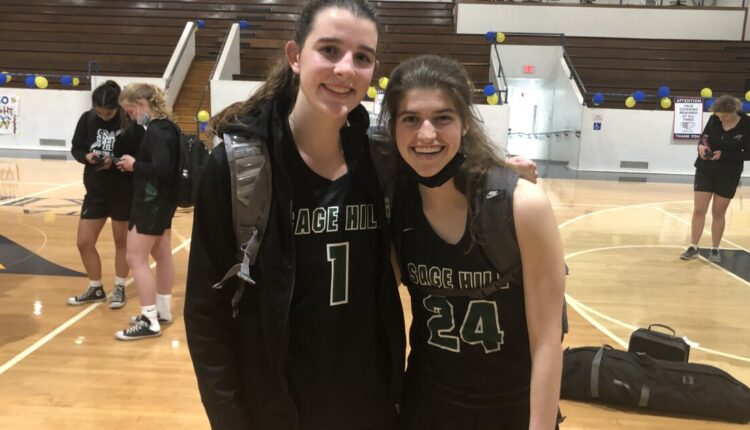 Sage Hill started strong again and earned a 58-41 win at Santa Monica in a CIF Southern Section Division 2AA semifinal game, punching his ticket to the CIF finals for the second straight year.

No. 2-seeded Sage Hill (22-9) will play at top-seeded Orange Lutheran in the title game Saturday at 7 pm Orange Lutheran defeated Crean Lutheran 72-52 in the other semifinal game.

Sage Hill, which won the Division 3AA title last year, moved up two divisions but still finds itself in a familiar position. Sophomore Emily Eadie led the Lightning on Wednesday with 17 points and 15 rebounds.

“It’s really cool,” said senior point guard Isabel Gomez, who scored 10 points Wednesday. “This group is just always on the go, so it’s good to get back out there and chase another championship.”

The Lightning seems to be peaking at the right time. They have won their four playoff games by an average of more than 22 points.

Sage Hill put no. 3-seeded Santa Monica (20-6) on its heels early, opening up an 18-4 advantage after the first quarter. Gomez was key in the early spurt, making all three of her first-quarter shots, including a pair from downtown.

Santa Monica made just one of its 12 field goal attempts in the opening frame, a layup by junior guard Brielle Minor, who led the hosts with a game-high 18 points.

“For us, it’s less about the 18 [points scored in the first quarter] and it’s more about the four [points allowed],” Sage Hill coach Kerwin Walters said. “It’s the defensive part that helped us get that lead. I think everyone looks at, ‘Oh, that’s a large score,’ but it takes the work on the defensive end to produce that stuff. We played really good defense in the first quarter, allowed them to creep back in during the second, but we played solid basketball after that.”

Kat Righeimer had 13 points and five rebounds for Sage Hill, which also got nine points from Zoie Lamkin and seven points from Annabelle Spotts. All three players are sophomores for the Lightning, who start just one senior in Gomez.

Sage Hill pushed his lead to 20 points midway through the third quarter on a three-pointer by Spotts, and the rout was on. Eadie’s three-pointer in the final moments of the third-quarter was blocked, but the ball went right to senior teammate Megan Shean, who put it in at the buzzer for a 52-27 advantage.

“They’re an excellent team, and they shoot the ball really well,” Santa Monica coach Douglas Kim said. “They really stretch you out. It didn’t help that we didn’t hit our shots early. With a team like Sage Hill, you have to score with them early on. But they’re a great team and they have a great chance to win it.”

Sage Hill has played his finals opponent, Orange Lutheran, just once before this season. The Lightning edged the Lancers 54-49 in a tournament game on Nov. 15.

Walters said that was a physical contest, and the rematch on Saturday could play out in similar fashion. But he expects his team to be ready for its chance to earn a second straight championship ring.

“It’s tough to replicate something that you did last year, knowing what the expectation is this year and still trying to get here,” he said. “I think the girls have done a great job just keeping focused, staying on task and trying to execute. I love this team. I just think they do so many things well, and we’re young … We’re still growing.”

Support our sports coverage by becoming a digital subscriber.

KHN’s ‘What the Health?’: Contemplating a Post-‘Roe’ World