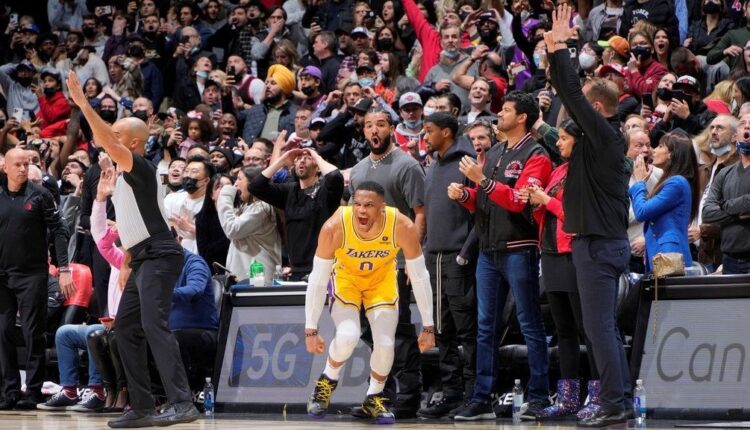 Just seconds after badly missing a 3-pointer off the backboard, Russell Westbrook came up with a big steal before sinking a clutch 3 that forced overtime to help the Los Angeles Lakers snap an 11-game road losing streak in Toronto.

Westbrook’s 3, which he hit after looking down and moving his foot off the 3-point line to make sure he shot a triple, came with nine-tenths of a second left in regulation before the Lakers outlasted the Raptors, 128-123, in overtime

In what has been a frustrating first season in Los Angeles, one of Westbrook’s biggest highlights as a Laker could not have come at a better time. The win snapped a three-game losing streak for the Lakers, who had dropped 12 of their previous 15 games.

“I was actually looking at his feet when he was getting close to the 3-point line,” LeBron James said of Westbrook’s big shot. “And saw him step on the 3-point line and then slide his foot back before he released it.

“Big-time IQ there on his part and a big-time shot by a big-time player.”

James had a big game himself, finishing with 36 points, nine rebounds, seven assists and two emphatic blocks. This was the first game the Lakers have won since the All-Star break in which James didn’t score 50 or more. And Westbrook helped make that happen with his 10th triple-double of the season with 22 points, 10 rebounds and 10 assists.

The performance came one game after a loss in Minnesota that saw Karl-Anthony Towns and Patrick Beverley talk trash and taunt Westbrook and the Lakers in a 124-104 Timberwolves win on Wednesday.

Westbrook’s steal and clutch shot at the end of regulation also redeemed himself seconds after James missed a 3-pointer and then Westbrook badly missed a 3 high off the backboard with 12.5 seconds left. When asked how he has been able to block out the attention and criticism that some of his missed shots have garnered this season to hit a big one like he did in Toronto, Westbrook pointed to his career scoring resume.

Meanwhile, James is closing in on passing Karl Malone for second all-time in scoring in the NBA. He is now 20 points away from passing “The Mailman.” After James logged 45 minutes, Lakers coach Frank Vogel said the team will discuss whether James will play on Saturday in Washington on the second of a back-to-back. If James rests, he could pass Malone in his return to Cleveland on Monday.

Westbrook will try to give the Lakers their first winning streak since they won their fourth straight on Jan. 7, when he returns to Washington DC for the first time since he was traded from the Wizards. Westbrook said a moment like the one in Toronto came after he kept the faith through what has been a trying season for the Lakers.

“Throughout this whole process, throughout the year, ups and downs, the good and the bad, I lean so much on my faith,” Westbrook said. “And it’s very important that I stay faithful and truthful to that because eventually it will all workout and nights like tonight was the reason why I stay just true to my faith.”