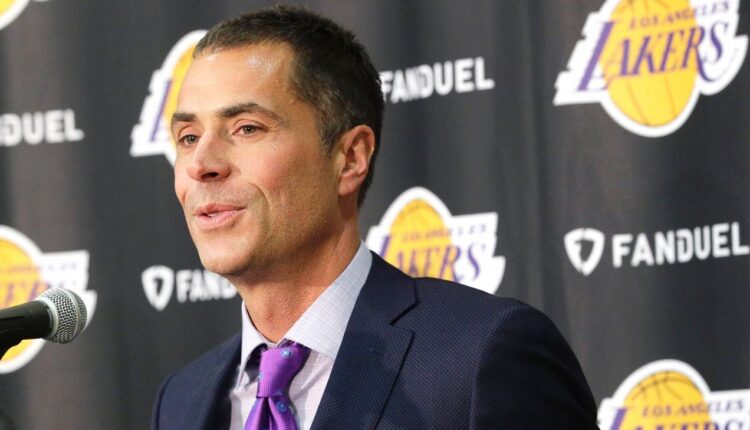 LOS ANGELES – As the curtain rises on the new NBA season, the Los Angeles Lakers expect all of their cast members to be on stage.

“On the opening night, when we play against the Golden State Warriors, all players currently under contract on our roster will be considered fully vaccinated that night,” said Lakers basketball operations president and general manager Rob Pelinka in one Call video conference Thursday. “We are really grateful for that.”

While the league doesn’t require players to get vaccinated against COVID-19, as ESPN’s Adrian Wojnarowski and Baxter Holmes reported last week, certain teams are required to adhere to stricter health and safety protocols than others based on their state’s health and safety requirements and county.

Pelinka said the Lakers organization will be in consultation with UCLA Health, a team sponsor, to ensure vaccinations for their players.

“I think working with UCLA and the doctors and staff internally, we will be grateful that we have no interruptions caused by a player or staff member’s vaccination status,” he said.

Lakers star LeBron James was asked in May if he had been vaccinated to prevent the coronavirus and said it was a “family matter”. Dwight Howard, the center of LA who returned to the Lakers as a free agent this off-season, previously questioned the effectiveness of vaccinations on one of his social media accounts.

“Do I believe in vaccinations?” Howard asked on an Instagram live video in July 2020. “No, I don’t. That’s my personal opinion, but no, I don’t.”

Pelinka did not say which players are still vaccinated.

The NBA has partnered with the National Basketball Players Association to negotiate protocols for vaccinated versus unvaccinated players as the 2021-22 season rapidly approaches. Unvaccinated players could be separated from their vaccinated teammates at team functions, meals, travel and locker rooms, sources told ESPN.

The Lakers will unofficially open a training camp this weekend with a mini camp organized by James in Las Vegas and hold a media day in LA on Tuesday, sources said. The news of the mini camp was first reported by The Athletic.

From there, the team has five training days before the start of the preseason against the Brooklyn Nets on October 3, and the regular season kicks off about two weeks later, at home against the Warriors on October 19.

“I think we’re incredibly excited about the guidance of local authorities and the state, but we’re excited that the Staples Center will be full of Lakers fans on opening night,” said Pelinka.

When the Lakers hosted the Golden State play-in tournament in the spring, the Staples Center was only allowed to operate at 33% occupancy (around 6,000 fans instead of the full 18,997).

You will witness a trimmer version of James early in his 19th season.

“I think what stands out is just his fitness,” Pelinka said of James. “He’s gotten leaner. And we all know that LeBron studies the great and puts things into his game in his explosiveness and quickness to translate.”

While James took 17 digits off his uniform and changed from No. 23 to No. 6, he’s kept his weight at about the 250 pounds he listed last season, sources told ESPN. His offseason therapy focused on building lean muscles instead of shedding pounds, sources said.

James, who will turn 37 in December, is part of a crowd of Lakers trying to extend his prime this season. The Lakers have nine players with over 12 years of experience out of the 13 players currently under contract on the roster, making the most players in league history with as much experience on a team (the 2015-16 San Antonio Spurs and 2016-17 Cleveland Cavaliers both had seven players to hit that bar).

To keep the aging roster on, Pelinka described the organization’s off-season efforts to strengthen medical and training staff, including replacing senior sports coach Nina Hsieh with Roger Sancho of the Warriors and adding to that department.

“We’re moving more towards a bespoke model around the players,” said Pelinka. “I think we live in a world where the television we watch is more individual, the food we eat when we go to restaurants, we have more control over how we eat [rice] Bowl or how to prepare a meal. I just think it’s really smart to adapt our approach to the services we are providing to the player on the training side. So we will concentrate very much on that when our employees go to camp. “