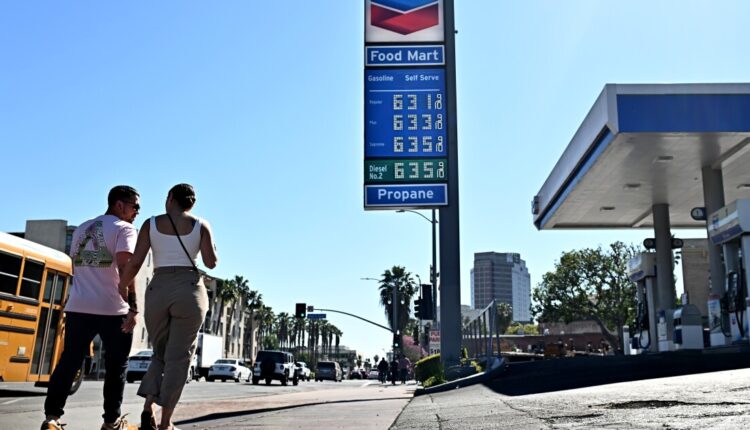 Jose Mendoza’s semi-truck rumbled into a gas station as he prepared for his once-a-week routine that had grown increasingly excruciating in recent months: watching the digital numbers on the diesel pump ratchet up until his 100-gallon tank was finally full.

Mendoza, who lives in Moreno Valley and often hauls clothes, makeup and, these days, personal protective equipment, works as an independent contractor. But he is locked into specific shipments, so he can’t switch up his route in an effort to save on gas. And the fuel surcharge the government pays his company to help offset gas prices almost never makes it down to him, Mendoza said, so increased gas prices translate into a pay cut.

“It makes it harder to pay my bills.”

Even before last week, when Russia, one of the world’s top producers of petroleum and other crude oil, invaded neighboring Ukraine and set off the largest ground war in Europe in 75 years, gas prices had ballooned in reaction to pandemic supply-chain issues and inflation.

The escalating conflict is among a trifecta of factors that will disproportionately affect low-income earners, specifically those like Mendoza who rely on their vehicles to make a living.

“If you’re a lower-income person commuting from Riverside into Irvine, it’s going to hit you really hard,” said Eric Swanson, a professor of economics at UC Irvine.

While gasoline isn’t a big part of the average American’s budget — about 3%, Swanson said, compared to about 40% for housing costs, which also are rising — hikes in gas prices are regressive, Swanson said, meaning that, in relative terms, they hit lower-income people harder than higher earners. And increased gas prices create a ripple effect, Swanson said, eventually leading to higher prices for most all transported goods.

“Even before Ukraine, we were having the worst inflation since 1980,” Swanson said, noting that, as well as oil, Russia is also a major producer of wheat and palladium, a metal used to make electronic chips.

“Prices are going to go up,” he said.

And in many places across the Southland, they already have.

“That’s just the business,” he said. “Everything is going up.”

The 55-year-old, who runs the business on his own and often works 14-hour shifts, typically covers Los Angeles and Orange counties, but sometimes makes far-off pickups, he said, including one that was 700 miles away.

To cover that kind of mileage, he fills up his 2016 Peterbilt flatbed truck almost every day, shelling out $200 each time — up from $160 at this time last year, he said.

It’s been challenging, but Perez said he finds encouragement from his customers’ loyalty and positive reviews.

For some workers, including many Uber and Lyft drivers, rising gas prices have made them consider changing careers altogether.

More than 5,000 people have signed an online petition urging the ride-hailing companies to increase their rates to help drivers cover higher gas prices.

A few hours later another driver posted, “I barely break even. Not worth it to drive anymore and beat up my car.”

Benjamin Valdez, a part-time Uber driver, upgraded from his Toyota Prius to an SUV last fall — a decision shaped, in part, by the fact that Uber pays $1.20 per mile for XL rides, those that fit up to six passengers, compared to only 60 cents per mile in smaller vehicles.

But in retrospect, Valdez said, he thinks it was probably the wrong move.

The new vehicle takes more gas and the demand for Uber XLs is largely during the day when Valdez can’t drive because he’s working his other job in computer tech for a community college. Instead, Valdez said, he’s now considering switching over to a taxi company, which would let him use his personal vehicle and pay around $3 per mile — a steep raise from what he makes at Uber.

Another Uber driver, who lives in Orange County and asked to be identified only by his first name, Taje, said that when he started with the company in 2017 he could sometimes find gas for as cheap as $2.18 per gallon, less than half the current average in Orange County.

For Alexis Fernandez, a third-generation date farmer from Coachella, rising gas prices have made her daily routine much more stressful.

The 25-year-old wakes up at 3:30 am most days to pack up sweet Medjool and creamy Barhi dates from her family’s ranch to sell at farmers markets across the Southland.

She used to make the long treks in the ranch’s cargo van, which she enjoyed driving because it sits high and has powerful headlights, which made it easier to see while driving through the dark morning hours. And because the van was so spacious, another employee always accompanied her on the trips to help keep her awake and run the family’s date stand once they arrived.

But on Monday, when Fernandez drove through the darkness for 140 miles from her home to the South Gate Farmers Market, she was alone in her much smaller personal car, a Nissan Altima.

The front and back seats were piled high with plastic boxes of dates — leaving no space for a passenger.

To help offset the increased costs, Fernandez said, they raised their prices by $1 in January — a one-pound pack now sells for $7.

A few stalls stood away at the Azteca Farms, fellow vendor Irma Suárez, 48, said she recently raised the price of all her produce by 50 cents. Kale and broccoli now sell for $3 per pound, Brussels sprouts for $4.

“We had some complaints when we first made the change because customers didn’t want to pay more,” Suárez said. “But our vegetables are quality and better than what you’re going to find at the grocery store.”

Most every morning, Suárez and her husband, Vicente, who own 20 acres of land in eastern Ventura County, load a ton of produce into their Ford F-350 diesel truck and head to a farmer’s market somewhere in the Southland.

They’ve been selling at markets for 22 years, Suárez said, and always take the same route.

“Right before we get on the freeway, we pass the same gas station and it feels like every other day the price is higher than the last time,” she said, noting that she’d shelled out $130 earlier that day to fill up the truck’s tank.

On Monday afternoon, Rosalinda Diaz, a 73-year-old retired waitress from South Los Angeles, surveyed the Azteca Farms vegetables before settling on a pound of green onions and a head of lettuce. It totaled $3, leaving her with only $2 in her purse.

Diaz, who lives on a fixed income of around $1,300 a month, said that although she primarily uses public transportation, she knows that higher gas prices mean rising prices in general.

“You have to buy less and do more with less even if you don’t own a car,” she said. “Everything is going up except Social Security.”

What are the roots of the Russia-Ukraine hostilities? Why is Putin obsessed with Ukraine? What are the sanctions against Russia? Want to help Ukraine? Here’s how

Several organizations in California, as well as international aid groups, are helping refugees, wounded soldiers and others in and around Ukraine. Here’s how you can contribute.

Supportive housing to rise above Metro stop in East Hollywood