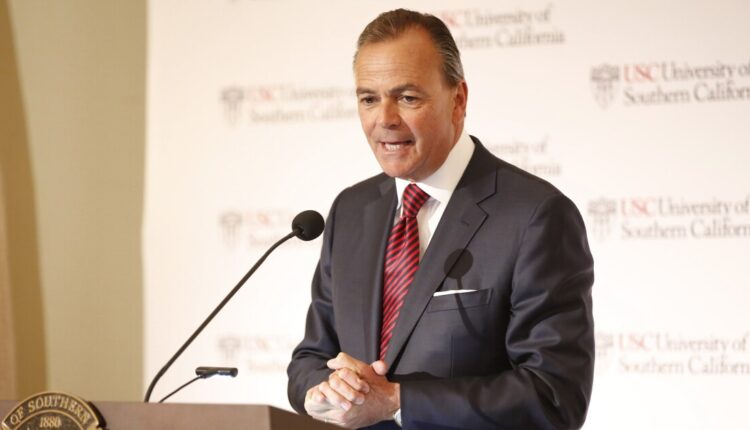 Is Rick Caruso ready to enter the race for Los Angeles mayor?

The billionaire developer has made a Friday afternoon appointment to file a declaration of his intent to run, the city clerk’s office said Wednesday, in the clearest sign yet that he will join the crowded field of candidates hoping to succeed Mayor Eric Garcetti.

In response to an inquiry from The Times, City Clerk Holly Wolcott confirmed the appointment. A minute later her colleague in the clerk’s office, Josué Marcus, wrote in an email: “He scheduled his appointment at 4:00 pm on Friday, Feb. 11.”

The deadline to declare an intention to run is Saturday.

For months, Caruso, 63, has been publicly coy about his intention, while behind the scenes hiring a roster of experienced political consultants to plot out how the businessman — who has never held elected office — might win.

Caruso, who developed the Grove shopping center and other high-end properties, could still decide not to enter the race. At least twice before, the former president of the LA police commission has publicly contemplated a bid for the mayor’s office but in the end decided not to run.

Caruso’s candidacy and the prospect of a self-funded campaign would inject high drama into a race that includes Rep. Karen Bass, City Councilmen Kevin de León and Joe Buscaino and City Atty. Mike Feuer among others.

Because of the pandemic, the city clerk’s office is closed to the public. As a result, prospective candidates for office in the city have had to schedule appointments where they sign documents, take an oath and submit the required paperwork.

Throughout the week, candidates have been posting gleeful shots of themselves taking the first formal step to jump into races.

Earlier this week, downtown business leader Jessica Lall became the first prominent candidate to drop out. Jessica Duboff, her deputy campaign manager, told The Times on Tuesday that Lall had not had any recent conversations with Caruso.

Last month, Caruso changed his voting registration from no party preference to Democrat.

“No one believes that the same group of politicians who allowed our city to become this unsafe, corrupt and cruel can solve any of the problems we face,” Caruso said in a statement to The Times last month. “This unprecedented crisis calls for strong leaders who have track records of managing complex institutions and finding innovative solutions to build housing for our population and to protect our communities.”

Where to stream all the Oscars nominees, from West Side Story to Dune