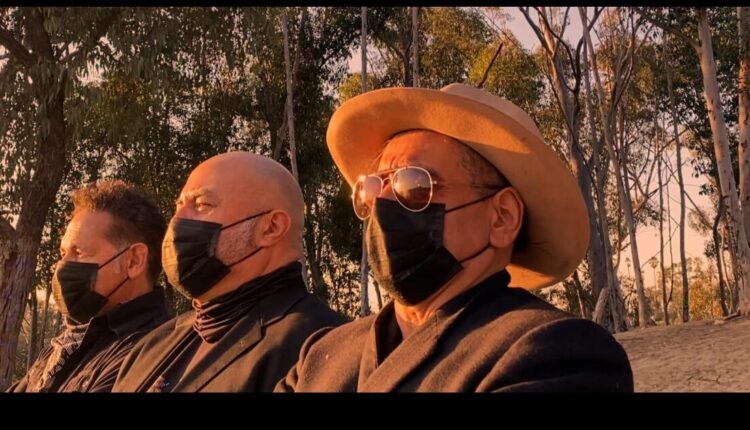 As theaters open their doors after a long hiatus, digital productions seem less attractive. But Angelenos might find a project that Culture Clash was working on during the pandemic of particular interest.

Chavez Ravine: In 9 Innings, a cinematic reinterpretation of the troupe’s play about a painful chapter in Los Angeles history, is now available on the Center Theater Group’s Digital Stage. Divided into nine bite-sized episodes, this new incarnation of the work (streaming through December 6th) has the feel of a multimedia mixtape documenting a battle royale in the city’s ghostly past.

Richard Montoya, Ric Salinas and Herbert Siguenza of Culture Clash, the authors and interpreters of the piece, strategically use their Vaudevillian skills in a work with serious intent: “Chavez Ravine” tells the story of the predominantly Mexican-American hill district of La Loma, Palo Verde and Bishop north of downtown Los Angeles, which were bulldozed in the name of urban renewal in the 1950s.

Government land acquisitions, sanctioned by major domains and sanctified by public housing promises, destroyed a group of close-knit communities that had settled in the area. The utopian vision that led many families to sell their homes has been undermined by corruption, agitation and greed.

The land, which was forcibly acquired when persuasion was insufficient, did not offer better living conditions for the displaced. Instead, it was dangled to lure the Brooklyn Dodgers to LA. Opened in 1962, Dodger Stadium is located where poor and marginalized Mexican Americans had laid generation roots.

This baseball connection inspires the nine-inning structure of Culture Clash. Granted, the broken digital setup can make this version of “Chavez Ravine” appear diffuse and disordered. But the vignettes are short, and each episode sets the context of the piece in so much seductive archival material and enriching visual detail that something is gained in the clumsiness.

The cinematic vortex brings an old Los Angeles to life, when the streets weren’t completely clogged with traffic, the hills were seasonally lush, and California dreams came to life in full. The Chavez Gorge, a haven for those excluded from the economic boom, instantly appears as an impoverished but collectively rich Eden.

In the midst of all the hypnotic imagery, the dramatic elements sometimes seem seamless. But stepping out of line in order to playfully play an idiosyncratic performance is a specialty of Culture Clash. When Montoya gets on his lines, he uses the moment to explain why he’s nervous about portraying Frank Wilkinson, the idealistic housing officer whose determination to provide desirable public housing made him the target of a McCarthy-era witch hunt.

That a fake mustache looks like it’s about to fall off, or that scenes filmed in the music center’s parking garage don’t hide the fact that they were shot with an iPhone, didn’t bother me too much. Culture Clash wants us to appreciate this digital offer as a work during the pandemic in a free-running community spirit.

It’s time to pay tribute to the late Gordon Davidson, the founding father of the Center Theater Group, for giving the company the idea to conduct a theatrical study of the story of Chavez Ravine. This production is both a love letter to the Center Theater Group, which has supported this work through many iterations, and a history lesson for our all-too-forgetful city.

Allusions to the company’s comic tradition are built into the piece. Montoya lets go of herself as Abuela, who swallows the moon and smokes a cigarette. Later, Siguenza and Salinas profitably repeat part of their Abbott and Costello “Who’s on First” routine in English and Spanish.

The inclusion of Maria (Gabriela Maldonado), daughter of Chavez Ravine, personalizes this historical story. When she dances with her older self, Maria (Sabina Zúñiga Varela), who has become a professor, the city’s past and present share a touching embrace.

“Chavez Ravine”, which premiered at the Mark Taper Forum in 2003, is a living project for Culture Clash. When I first saw the play in a revised version in 2015, directed by Lisa Peterson and with music by the Rodarte Brothers, I admired the production more than the script.

In this new digital version, jointly curated by Culture Clash and Peterson, the script is sampled in a storytelling mode described as “selections and allegories”. The emphasis is on seeing what is lost. The musicians Vaneza Calderon, Randy Rodarte and Scott Rodarte lyrically support this retrospective magic act.

Ultimately, the staging looks like a palimpsest through which forgotten layers of Los Angeles look through again and again. “Chavez Ravine” is a ghost story that exhumes what injustice tried to bury.

Where: Via the Center Theater Group’s Digital Stage, ctgla.org/ChavezRavineIn9Innings

When: Streaming until December 6th