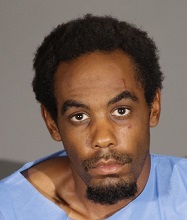 Jarvis Mathias Newman, aka Marquis Perkings, a 26-year-old man, was charged with rape and sexual harassment by prosecutors after allegedly chasing the two women in their sleep.

Three days later, officers were dispatched to the Ocean and Colorado area near Santa Monica Pier to investigate an attack.

The victim told them that she was sleeping in her tent on 1200 beach block around 4:30 am when a man “woke her up and started making small talk,” said Flores.

“At some point the man tried to shift his conversation to a sexual character,” said Flores.

The man then “tried to grab the woman around the neck and undress her,” he said. “The victim screamed and was able to fend off the male before he fled.”

The woman described her attacker to police who were watching a man near the downtown train station that matched the description, Flores said.

The victim clearly identified Newman as the person who attacked her, Flores said. During the investigation, officers learned that Newman was an active registered sex offender.

Detectives were tracking the victim in the first incident, and she also identified Newman as the man who attacked her, Flores said.

Anyone with additional information or an incident related to the suspect should call Detective Jacob Holloway of the Criminal Investigations Division (CID) at (310) 458-8934 or the Commandant’s Office at (310) 458-2249.