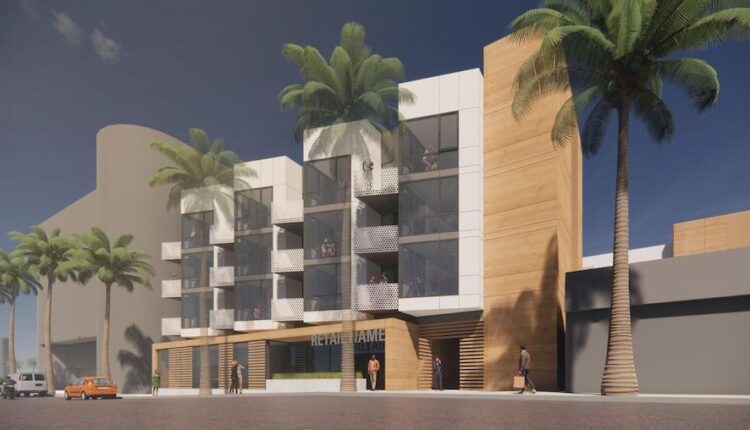 A real estate firm has bought three Wilshire Boulevard properties, planning to bring several multi-story, mixed-use developments to the street, as part of projects that would bring over 300 units of housing to Santa Monica.

There are four new projects that Cypress Equity Investments (CEI), a development firm from Brentwood, is developing in Santa Monica as reported by Urbanize Los Angeles and the Santa Monica Daily Press. All but one of these projects are on Wilshire Boulevard.

The first project that CEI is conducting community meetings and applying for City entitlements for is at 2025 and 2501 Wilshire. Both buildings would be a mixed-use combination of residences and ground floor commercial space. 2025 Wilshire’s proposal calls for a four story building to replace the current one story commercial building that contains Chipotle and Veggie Grill restaurants. The new building would be 42 feet tall and be composed of a ground floor commercial space below 46 apartment units with a two level underground parking garage that would hold 101 stalls for parking. The exterior would be made of white stucco with perforated metal screens and wood paneling in the contemporary low rise style.

A proposal for 2501 Wilshire is another four story building with three floors of sublevel parking with 198 parking spaces, ground floor commercial space, and 70 residential units. Ottinger Architects is the designer listed for 2501 Wilshire which is described as a white complex in the contemporary low rise style with a small courtyard.

Both of these projects have proposed to fulfill their obligation to provide deed restricted affordable housing, 7 units for 2025 Wilshire and 11 for 2501 Wilshire, by developing those apartment units at an “offsite location”.

The third project, which has not been formally announced by CEI, is proposed for 1902 Wilshire. It is another four story mixed-use building with two levels of underground parking that contains 143 parking spaces for cars, 91 bicycle parking spaces and then a ground floor “neighborhood serving” retail space, and 71 apartment units that are contained within a 50 foot high education. The designer of record is Patrick Tighe Architecture who envisions two interconnected buildings built around a central courtyard that are made of metal, wood and stone. Again, the developer claims that the 11 mandatory deed-restricted units that they would have to deliver according to entitlement rules would be developed at an “offsite location.”

The fourth proposed building is the only one not on Wilshire Boulevard and the potential site is located at 1537 Lincoln Boulevard which is quite close to the final Santa Monica stop of the Metro E Line. CEI’s plans call for a five story building that is again mixed use with underground parking for 98 vehicles, ground floor commercial space and 114 residential units designed by Ottinger Architects. The building itself would be the site for eight of the required affordable housing units and the balance of 21 deed restricted units required for zoning entitlements would be built “offsite” according to CEI’s claims.