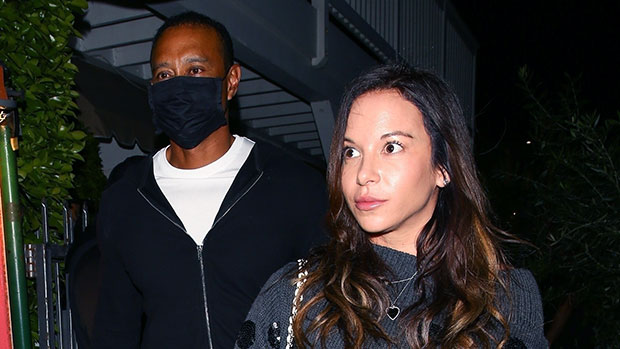 On Feb. 16, Tiger Woods made a rare public outing with his girlfriend, Erica Herman. The couple was joined by some friends for dinner in Santa Monica.

It’s been nearly one year since Tiger Woods suffered substantial injuries in a car accident, but while he was out on Feb. 16, he looked happy and healthy. The golfer was photographed leaving Giorgio Baldi in Santa Monica with his girlfriend, Erica Herman. He wore dark jeans, a white t-shirt and black zip-up, while Erica rocked a sweater dress and booties. The two were joined by friends for their night out at the hotspot.

Tiger and Erica have been together since 2017 after meeting while she was working at a restaurant that he owned. She has been a major support system for the 46-year-old, especially following his horrific car accident in Feb. 2021. Tiger was rushed to the hospital after the single car crash on Feb. 21, and had to have emergency surgery on his leg. His recovery took months as he learned to walk again, and Erica was by his side.

Although Tiger has acknowledged that he will never have a full-time career as a professional golfer again, he hasn’t given up on the sport. Just eight months after the accident, he was spotted back on the golf course. In Nov. 2021, he shared the first video of himself on the course. This came after months of needing crutches to help him simply walk around, so it was a major improvement.

In Dec 2021, Tiger played in his first post-car accident golf tournament. He joined his son charlie, now 13, for the PNC tournament, and the duo came in second place. Tiger shares Charlie, as well as a 14-year-old daughter, Samwith his ex-wife, Elin Nordegren.

For the most part, Tiger and Erica have kept their relationship out of the public eye during their nearly five years together. However, at the beginning of 2022, they were photographed at the airport together, seemingly heading on a vacation or returning from one. Clearly, these two are still going strong!

US, NATO ramp up warnings of Russian aggression in Ukraine