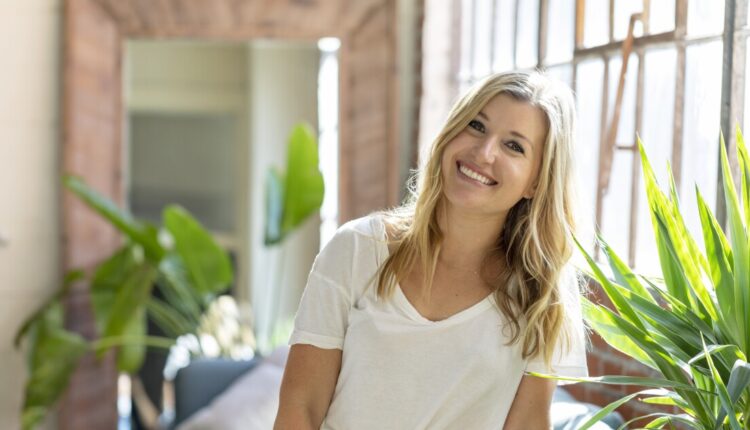 The race was on from the moment her phone rang on a Sunday afternoon – Sarah Moret was invited to appear on the ABC TV show “Shark Tank,” but she had only two hours to make it to the Los Angeles studio for taping.

“Shark Tank” is a reality TV show on ABC, now in its 13th season, in which aspiring entrepreneurs pitch their business ideas to a panel of well-heeled investors with the hope of landing an investment deal.

Moret, an entrepreneur who grew up in Rancho Santa Fe, knew she was on stand-by to appear on the show to pitch her hygiene products company, but it was Sunday and she figured she had time for a quick hike with her fiancé in the hills near the Griffith Observatory.

“Of course, that’s when I got the call,” she said. She jumped in her car, drove 40 minutes to her home in Santa Monica, got ready and made it to the studio by 4 pm, just in time for her taping.

Moret said had practiced her pitch more than a hundred times in the weeks leading up to her appearance, so she was ready to go. “I didn’t have time to get nervous,” she said.

Her segment aired March 11, and she walked away with two big prizes – a $300,000 investment in her company in exchange for a 14 percent equity stake, by two of the show’s regular sharks, Dallas Mavericks owner Mark Cuban and real estate mogul Barbara Corcoran.

Also, she sold out her inventory of healthy, chemical-free women’s deodorant in just a few hours after the show aired. She and her small team of three employees are now working frantically to restock their inventory, and she currently has a waiting list of 5,000 potential customers.

Moret attended R. Roger Rowe School through 8th grade, then attended and graduated from Torrey Pines High School. She moved back east for college, earning a degree in accounting from Boston University. She worked at a major accounting firm for a couple of years, then moved back across country to San Francisco, where she joined a venture capital company.

During that time, she said, she was asking by the entrepreneurial bug, and, in 2018, she decided to start her own company, spending $12,000 of her savings and recruiting her sister to join the venture.

Moret founded Curie in 2018, and her first product was an aluminum-free deodorant billed as a healthy, highly effective alternative to products laced with chemicals. The company sold its products strictly online until the coronavirus pandemic turned the business world upside down, said Moret.

Deodorant sales immediately plummeted as people stayed at home, so Moret pivoted to another product she’d been developing – hand sanitizer. Curie’s hand sanitizer smelled great and had the benefit of hydrating the skin, and sales took off when several large retailers including Nordstrom and Bloomingdales began carrying the product, Moret said.

The biggest challenge at that point, she said, was finding enough plastic bottles to package the hand sanitizer, and she spent long hours on the phone, talking to bottle manufacturers around the world. Curie ended up selling hundreds of thousands of bottles of sanitizer in 2020.

The hand sanitizer helped Curie get its foot in the door with retailers, said Moret, and the stores now carry the company’s deodorant and other products.

In the wake of her “Shark Tank” appearance, Moret and her team are ramping up production. The company uses ingredients that must be sourced and shipped to the US from countries around the world before the products can be made, said Moret, such as a type of lime oil that is only produced in a small town in Italy.

She anticipates having product back in stock by the end of April or early May, and she will notify her customers by email when that happens, she said.

Moret said she was surprised by the volume of orders that came in immediately after her Shark Tank episode aired.

Despite the short notice for the show’s taping, Moret said she felt the segment went well. She said her preparation included previous live TV appearances on the QVC shopping network to sell her products, as well as working at a venture capital firm where she learned the vocabulary of the investment industry.

“I think the sharks were impressed by that and they respected me,” she said.

Things grew especially tense when one shark made an offer, rejected Moret’s counteroffer, and then withdrew his deal. That’s when Cuban and Corcoran swooped in with their offer.

“I knew I was risking it but I decided to take the chance,” she said about turning down the first offer.

For more about Curie, visit curiebod.com.

Dog rescued from LA River after massive storm in California

Should You Get a Fourth Dose? – NBC Los Angeles