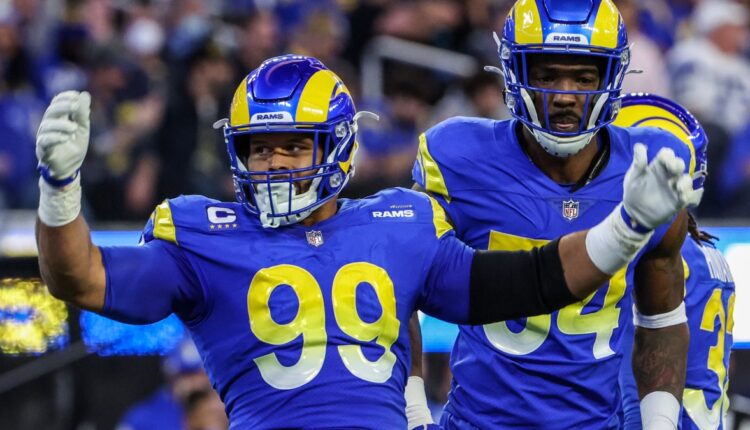 Many Los Angeles Rams fans first came under the team’s spell because of the Fearsome Fearsome, perhaps the greatest defensive line in NFL history.

Merlin Olsen, Rosey Grier, Deacon Jones and Lamar Lundy battered quarterbacks and crushed running backs for the better part of the 1960s, living up to their catchy nickname with feats that regularly exceeded the accomplishments of their more modestly talented Rams teams.

Six years into the Rams’ second stint in Los Angeles, their front is once again the strength of their defense and one of the best groups in the league.

They’re not usually a foursome, however: The Rams typically play three down linemen with two edge rushers, like many teams in the modern game. Perennial All-Pro Aaron Donald and the ferocious four around him have been outstanding all season, and they could make the difference in the Super Bowl.

Call them the Fearsome Fivesome, even if that’s also not precisely correct. With one more win, they’ll be accurately called champions.

“We have a lot of good players everywhere on our defensive front, and you can’t help but just rely on those guys and know they’re going to do their thing every week,” nose tackle Greg Gaines said. “Everyone knows they’re going to take care of business.”

Seven-time All-Pro Donald’s pursuit of the quarterback is augmented by two of the NFL’s most dangerous edge rushers: three-time All-Pro Von Miller and productive sack artist Leonard Floyd. When Donald is stopping the run, he is helped by A’Shawn Robinson and Gaines, two effective and ever-improving linemen with ebullient personalities and energy to spare.

In the Super Bowl, the Rams also expect the return of Sebastian Joseph-Day, likely their top run defender and another big personality.

Add it up, and it’s a fearsome amount of talent.

First-year Rams defensive coordinator Raheem Morris stops short of calling this group the best defensive line he’s ever been around. After all, he was a defensive assistant for the Tampa Bay Buccaneers in 2002 with All-Pros Warren Sapp and Simeon Rice.

“You never really want to compare,” Morris said. “But Aaron Donald is going down as a legend in this game. Von Miller is going down as a legend. Flo is working himself up into being legendary-like. Who knows what he can become? And then with what Greg has been able to do throughout the year, and with A’Shawn Robinson, and then if we get (Joseph-Day) back, I think it’s an awesome group.”

The Rams’ awesomeness up front is a potential nightmare for the Bengals, whose clearest weakness is their offensive line. Blocking Donald, Miller and Floyd requires skill, athleticism, precision and consistency — and Cincinnati has lacked most of that from its offensive line during the postseason.

Donald had 12 1/2 sacks this season while winning far more pass-rush matchups with interior linemen than anybody in the league, according to NFL Next Gen Stats. Containing him requires at least two blockers on pretty much every down.

Miller and Floyd also require serious attention, which means Gaines and Robinson could end up the most important players on the line if the Bengals wisely decide to use their few resources on their subpar interior line to double-team Donald. Gaines has been a surprisingly effective pass rusher with 4 1/2 regular-season sacks and 13 quarterback hits, third most on the defense.

Gaines barely played for the Rams in his first 2 1/2 seasons before Joseph-Day’s pectoral injury in October thrust him into the lineup. He has become an impressive all-around contributor, and his self-deprecating sense of humor has made him a cult hero among Rams fans. They devote hours of online fun to praising the 315-pound tackle for his surprising speed.

Miller admitted he had never heard of Gaines before joining the Rams, and he described his new teammate as looking like “a substitute teacher” even while praising his galvanizing effect on the group.

The best part of LA’s defense will get even better with Joseph-Day in the mix. He is all but certain to be back in the line rotation for the first time since undergoing pectoral surgery in November.

“This is a special group of talented guys on this defense,” Miller said. “I’m talking about one of the best groups I’ve ever been fortunate enough to be a part of. We work together as a team, and it just gets better each week. If we had had a full season (together), there’s no telling what this group would be.”

Heat records broken across LA region, including LAX high of 89