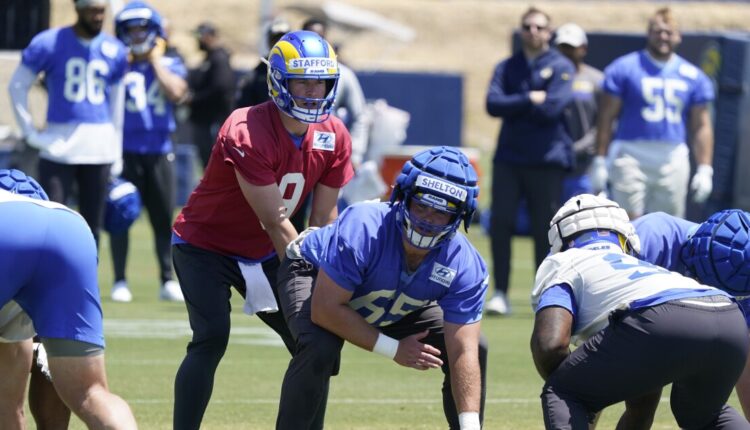 Matthew Stafford took snaps Monday during the Rams’ first day of organized team activity workouts, but the Super Bowl champion quarterback might not throw a pass in drills until training camp in July.

Stafford, 34, confirmed that after the Super Bowl, he received an injection in his right elbow for an issue he dealt with throughout the season.

He was asked whether he would throw passes during OTAs and minicamp or wait until training camp.

Said Rams coach Sean McVay: “The goal, and the thought process, what he’ll start to ramp that up when we get closer to training camp.”

Star defensive lineman Aaron Donald — who celebrated his 31st birthday Monday — and standout cornerback Jalen Ramsey were among players who did not attend the practice, which is part of the NFL’s voluntary workout program.

Observations from the Rams’ workout:

Darrell Henderson did not participate because of what McVay described as an injury from last season that flared up last week.

Before last season, Akers wanted to switch his jersey from No. 23 to No. 3, but that reportedly would have cost him hundreds of thousands of dollars to buy the existing inventory of his jersey as stipulated by the NFL.

Rams running back Cam Akers changed from No. 23 to No. 3 for this season.

So, Akers set his sights on making the cost-free change in 2022.

Wide receiver Odell Beckham Jr. wore no. 3 last season after signing with the Rams at midseason. Beckham is a free agent.

Receivers Van Jefferson and Jacob Harris, who are rehabilitating after knee surgeries, did not participate.

Bobby Wagner commanded the defense from his inside linebacker spot, providing instruction to —and also taking it from — second-year per Ernest Jones, who has switched from No. 50 to no. 53

Tutu Atwell steps up: It was only a seven-on-seven drill, but the 5-foot-9, 165-pound wide receiver made two tough catches — one sliding on his knees and another in traffic — which brought on-field praise from McVay.

Atwell, a second-round draft pick in 2021, struggled as a rookie and suffered a season-ending shoulder injury against the Houston Texans in October. But he has been shadowing Cooper Kupp this offseason and could fashion a role in the offense.

Play of the day: Second-year cornerback Robert Rochell intercepted a pass during a seven-on-seven drill and ran to the end zone to the delight of teammates on defense.

Last season, Rochell suffered a rib injury that prevented him from playing in the latter part of the season and the playoffs.

Center of the line: Coleman Shelton got work at center, Tremayne Anchrum at right guard.

The role for third-round draft pick Logan Bruss is expected to grow as workouts progress. Bruss was drafted as a potential replacement for Austin Corbett, who signed with the Carolina Panthers.

Observation time: McVay has said he was looking forward to learning from and sharing ideas with new USC coach Lincoln Riley.

On Monday, he entertained a former Trojans coach.

Steve Sarkisian, preparing for his second season as head coach at Texas, attended the workout.

Etc. The Rams finalized dates and times for their three preseason games. They play the Chargers at SoFi Stadium on Saturday, Aug. 13, at 7 pm On Friday, Aug. 19, they play host to the Texans at 7 pm The Rams play on the road against the Cincinnati Bengals on Saturday, Aug. 27, at 3pm PDT. The Rams are scheduled to practice with the Bengals in Cincinnati in the days leading up to the game. … McVay and his fiancee, Veronika Khomyn, in partnership with Campbell’s Chunky, made a $50,000 donation to the American Red Cross in support of Ukraine, the Rams announced. Khomyn is from Ukraine and has family in the war-torn country.