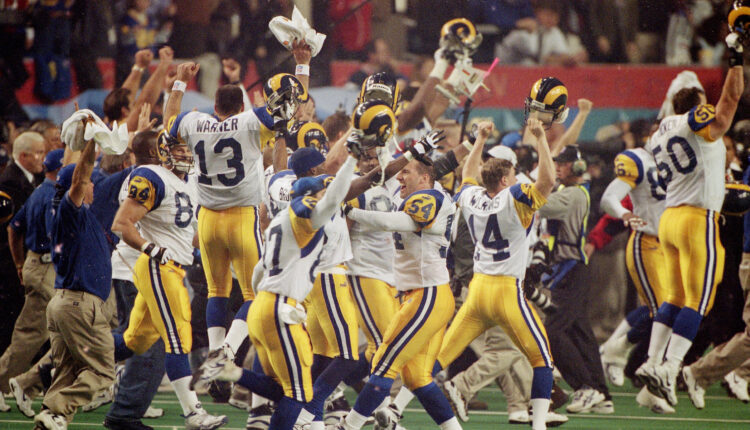 The Los Angeles Rams are headed to the Super Bowl for the fifth time in franchise history after a stunning comeback victory over the San Francisco 49ers during Sunday’s NFC Championship Game.

The Rams will have the home field advantage when they take on the Cincinnati Bengals on Feb. 13 at SoFi Stadium in Inglewood, California, though they will technically be considered the “visiting team” in the game.

Los Angeles has far more experience in the playoffs and on the big stage, but the Bengals, who last appeared in a Super Bowl during the 1988 season, will no doubt put up a fight to be able to claim the Lombardi Trophy for the first time in team history.

Read below for a breakdown of the Rams’ Super Bowl history.

The Rams defeated the Dallas Cowboys 30-22 in the divisional round before upsetting the No. 1 seed New Orleans Saints 26-23 in overtime in the NFC Championship Game to secure the franchise’s fourth Super Bowl appearance.

Led by then-33-year-old head coach Sean McVay, the youngest coach to ever make it to the big stage, the Rams boasted a 13-3 record in the regular season with third-year quarterback Jared Goff under center.

Facing the New England Patriots in a rematch of Super Bowl 36, the Rams’ offense was shut out in the first half of the game, with Tom Brady and favorite targets Rob Gronkowski and Julian Edelman doing little more to score on their end.

The score stood at 3-0 with New England leading going into the second half. A field goal late in the third would get the Rams on the board, but the Patriots would win the game 13-3 for what would be the lowest-scoring Super Bowl in NFL history. 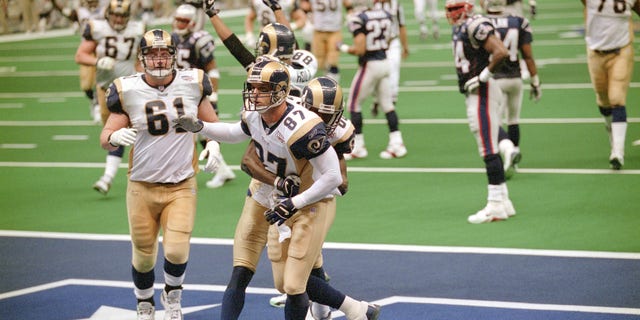 Ricky Proehl #87 and Isaac Bruce #80 of the St. Louis Rams celebrate after Proehl scored a touchdown against the New England Patriots during Super Bowl XXXVI at the Louisiana Superdome on Feb. 3, 2002 in New Orleans, Louisiana. The Patriots won the game 20-17.
(Photo by Focus on Sport/Getty Images)

Just two seasons after winning their first championship, the Rams found themselves back in the Super Bowl with a 14-2 record, leading the league in both scoring and total yards.

With league MVP quarterback Kurt Warner leading the way, the Rams had one of the most intimidating offenses at the time, including legendary running back Marshall Faulk, who had been named NFL Offensive Player of the Year for the third season in a row.

The Patriots were the clear underdogs heading into Super Bowl 36, with second-year quarterback Tom Brady named as the starter over Drew Bledsoe, who suffered a serious injury in Week 2.

The Rams were on the board first but by halftime, Brady shocked the world as the Patriots headed to the locker rooms with a 14-3 lead. The Rams climbed back late in the fourth to tie the game at 17 all, but with just under two minutes remaining, Brady drove the ball down the field into Rams’ territory for Adam Vinatieri to win the game on a 48-yard field goal. 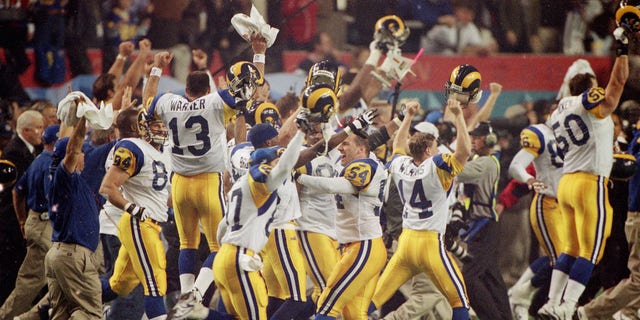 After an embarrassing 30-3 loss to the San Francisco 49ers in the conference championships the year before, the Rams defeated the Minnesota Vikings 49-37 in the divisional round and the Tampa Bay Buccaneers 11-6 in the NFC Championship Game to appear in the franchise’s second Super Bowl.

Having only played one NFL game the year before, Warner wowed the sports community by throwing 4,353 yards for 41 touchdowns and 13 touchdowns, taking the Rams from a 4-12 team to a 13-3 powerhouse.

The Rams dominated the Titans, going up 16-0 in the third quarter before Tennessee managed a touchdown and a failed 2-point conversion. The score was enough to build their momentum to tie the game late in the fourth quarter, but Isaac Bruce’s 73-yard touchdown on the following play would be the game-winner. 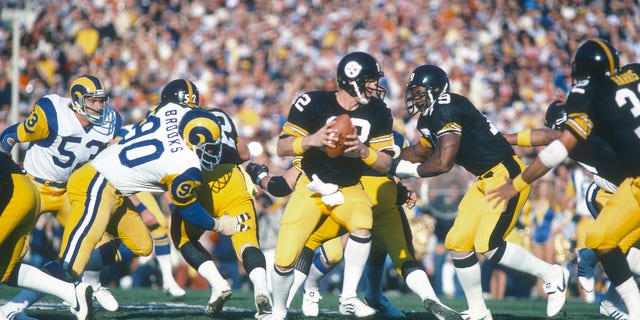 Terry Bradshaw #12 of the Pittsburgh Steelers turns to hand the ball off to a running back against the Los Angeles Rams during Super Bowl XIV on January 20, 1980 at the Rose Bowl in Pasadena, California. The Steelers won the Super Bowl 31-19.
(Photo by Focus on Sport/Getty Images)

The Rams’ first Super Bowl appearance came after a lackluster season that saw the team go 9-7. With the loss of quarterback Pat Haden, the Rams defeated the Cowboys 21-19 to advance to the conference championships where they shut out the Buccaneers, 9-0.

The Pittsburgh Steelers were the favorites to win, making a second consecutive trip to the Super Bowl and their fourth in six seasons. With quarterback Terry Bradshaw under center and the “Steel Curtain” defense at its prime, the Rams were facing an uphill battle.

Los Angeles surprisingly put up a fight, keeping a lead in the second and fourth quarter, but the Steelers put up two more scores to win the game 31-19.

What travelers should know about Super Bowl XVI in Los Angeles