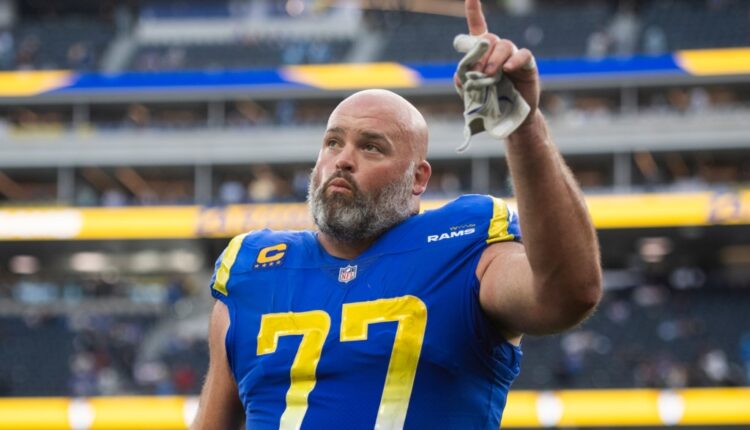 Starting at left tackle for the Super Bowl-winning Rams could have been a signal that Andrew Whitworth was still good enough to keep playing.

Instead, it gave the Rams’ revered elder statesman a way to go out on top.

Whitworth, 40, made it official Tuesday morning, the Rams announcing his retirement after a 16-year NFL career.

He was expected to talk about the decision in a news conference later Tuesday at the Rams’ training facility in Thousand Oaks.

Whitworth’s departure has one tangible benefit for the Rams.

By forgoing the final season of the three-year, $30 million contract he signed in March 2020, Whitworth saves the Rams $16 million against the NFL salary cap for 2022, the biggest step toward the team getting under the cap before Wednesday’s deadline.

The Rams anticipated Whitworth’s retirement by re-signing Joe Noteboom, a 26-year-old potential free agent, on Monday to a three-year contract reported to be worth $25 million in guaranteed money and as much as $47.5 million including incentives.

But Whitworth will be hard to replace for reasons tangible and intangible.

Three days before the Rams’ 23-20 victory over the Cincinnati Bengals at SoFi Stadium Whitworth gave his only Super Bowl victory, Whitworth was presented with the NFL’s Walter Payton Man of the Year Award in recognition of his on- and off-field contributions.

The award said as much about Whitworth’s stature as his four Pro Bowl selections (2012, 2015 and 2016 with the Bengals, 2017 with the Rams) and two All-Pro honors (2015, 2017). and his no. 6 ranking among active players in career “approximate value,” Pro Football Reference’s production metric.

One of the Rams’ first big player signings after the hiring of Coach Sean McVay in 2017, Whitworth lived up to all expectations. He was the reliable blind-side blocker for quarterbacks Jared Goff and Matthew Stafford and an effective run blocker for 2017 NFL Offensive Player of the Year Todd Gurley.

Annually one of the Rams’ captains, the literal gray-beard in the locker room, Whitworth was counted on to encourage offer locker room philosophy after tough defeats and losing streaks.

He was typically uplifting when he hinted at retirement as he raised the Super Bowl LVI trophy and addressed the crowd of fans at the Rams’ victory parade and rally outside the Coliseum on Feb. 16.

“It’s an unbelievable scenario,” Whitworth said. “I could have never dreamed about it, thought it could play out this way. I couldn’t be happier to be exactly where my feet are, in this city, with this football team, with this group of people that I got to do this with, and this organization.”

But a player doesn’t last this long, becoming the first to start at left tackle after turning 40 (last Dec. 12), without having a little edge to him.

“Five years ago, I was told I was a little too old, and I was told that maybe my time was done,” Whitworth said from the rally stage. “And I tell you this, for every single person standing out there that’s ever doubted anything you’ve ever done: Bet on yourself. ‘Cause five years later, I’m holding this trophy up, and I’m 40 years old.

“Don’t let anybody’s opinion of you ever become your reality. Bet on yourself. World Damn Champions!”

This story will be updated.

Rams offensive lineman Andrew Whitworth holds the Lombardi Trophy after the Rams defeated the Cincinnati Bengals, 23-20, in Super Bowl LVI last month at SoFi Stadium in Inglewood. The 40-year-old Whitworth on Tuesday made official what many had anticipated, that he is retiring after a 16-year NFL career. (Photo by Keith Birmingham, Pasadena Star-News/SCNG)

FRENCH BULLDOG PREVAILS AS MOST POPULAR DOG IN LOS ANGELES