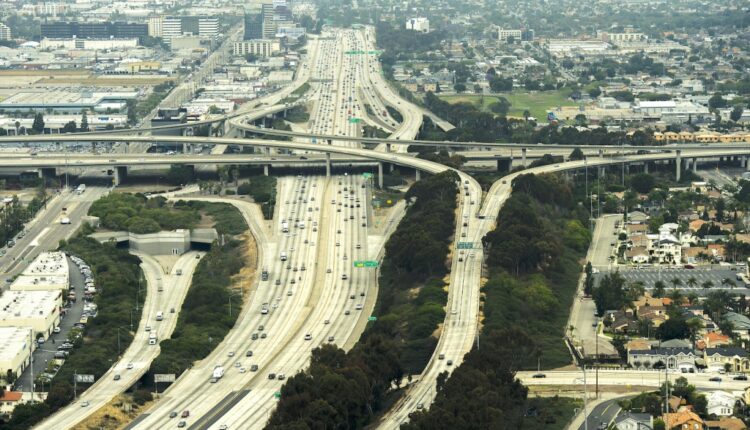 Freeways play such an important role in the everyday life of most Southern Californians that they have become an integral part of the region’s landscape. Los Angeles’ first freeway, the 110 in Pasadena, fully opened on New Year’s Eve 1939.

Los Angeles city and county officials and the Southern California Automobile Club had all conducted studies recommending a system of highways, and the 1947 granting of state and federal funding to the project sped the road construction.

Unlike the newer 105 (Century) Freeway, which opened as a fully completed road in 1993, the other three South Bay Freeways opened in segments. In the case of Freeway 405, segmentation was a source of controversy.

The first segments of the 405 were built on its north and south legs in the late 1950s and early 1960s, from Burbank Boulevard in the San Fernando Valley to the south and from Long Beach to the north.

This happened despite widespread agreement that it was at this time in and around Los Angeles International Airport, which has been increasingly overcrowded since it opened in 1949, that the worst traffic jams in the Los Angeles Basin occurred. The airfield was exactly in the middle between the two segments that were built first.

Students from nearby schools join the mothers at the dedication ceremonies for a new section of the 405 Freeway on April 1, 1963. About 30 picket lines with posters suddenly appeared before the ceremony. The new motorway link extends from Lawndale to Hawthorne. (Courtesy photo of the Los Angeles Public Library Photo Collection)

South Bay residents, particularly those in Westchester and Inglewood near LAX, have expressed concern. They formed the Inter-City Highway Committee to make a unified appeal for State Highways engineers to reconsider their priorities and begin building the 405 segments that run through South Bay. Other cities represented on the committee were Culver City, Torrance, El Segundo, Hawthorne and the beach towns of Hermosa, Manhattan and Redondo.

By 1960 the northern and southern sections of the 405 were largely complete, and the ICHC’s urgent admonitions to speed up highway construction on the remaining central section were taken up by the Los Angeles district inspector, Kenneth Hahn. The area on which no motorway was built at that time was in the Hahn district.

“We’re trying to build freeway links so they can be connected to another freeway and put into service immediately, rather than separate structures,” Milton Stark, State Highway Commission information officer, told the Los Angeles Times in November 1959.

State engineers originally predicted the 405 link through South Bay would be completed in the fall of 1962. In March 1961, the highway was cleared from Manchester Boulevard to 110 Freeway on 190th Street. But the only construction in progress was an underpass near Manchester.

However, the work should be completed in the next two years. Here is a list of the South Bay 405 sections from north to south and the dates they were completed:

The section from La Tijera to Jefferson was the last to be dedicated. La Tijera ramps remained closed after the street opened on June 10, 1963, thanks to ongoing protests from Westchester and Inglewood’s parents.

The pickets were parents who demanded that officials keep their promise to build a separate pedestrian bridge over the motorway in La Tijera to reduce the risk of local students having to cross the motorway bridge there on foot.

The widely visible protests reached Hahn, who promised that the district would keep his promise. But ultimately, a separate pedestrian bridge over the 405 Freeway at La Tijera would never be built. Instead, the chain link fence, approved by the Los Angeles City Council in 1964, is the only pavement protection from traffic on either side of the busy thoroughfare.

That being said, the newly opened road stretched 41.8 miles from the 5 Freeway in the city of San Fernando in the south to the 710 Freeway in Long Beach. Total construction costs were $ 16.5 million, which is nearly $ 150 million in 2021.

It would extend through Orange County by the late 1960s and eventually provide a through link to San Diego.

Of course, the 405 Freeway has evolved from a transportation solution to a transportation nightmare in the decades that have followed. As the old joke says, it’s called 405 because traffic moves at 4 or 5 miles an hour.