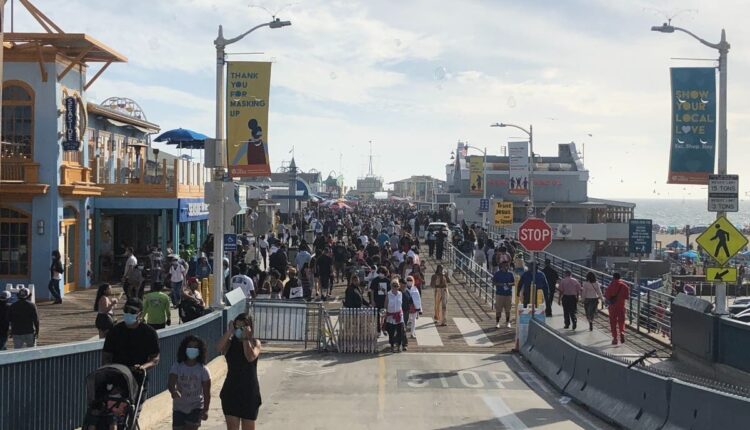 The California section of the Children’s Health Defense Organization, which has long spoken out against vaccination regulations and attacked the effectiveness of vaccines, will hold a protest march near Santa Monica Pier at 4 p.m.

The demonstration appears to be about school mandates as protesters hold signs saying “Parental rights are fundamental and paramount”, “No to vaccination mandates” and “We are their voice, they are our future”.

It is unclear which mandates the group specifically protested against.

The Santa Monica-Malibu Unified School District does not have a COVID-19 vaccine mandate, said community and public relations officer Gail Pinsker. They will await Governor Gavin Newsom’s decision on student vaccination mandates and enforce any mandates he has given.
However, the district requires indoor and outdoor masking on campus.

Los Angeles County will begin giving pediatric doses of the Pfizer-COVID-19 to children ages 5-11 on Wednesday, the day after the U.S. Centers for Disease Control and Prevention gave final approval of the vaccinations. To offer the vaccine.

The district received its first shipment of vaccines Tuesday, and district officials will be gathering in an East Los Angeles park in the late afternoon to mark the start of vaccination efforts for young children.

Los Angeles Public Health Director Barbara Ferrer said there are 900 providers in the county ready to deliver the pediatric doses.

“Sites that receive doses today (Tuesday) may be able to start vaccinating as early as Wednesday afternoon or Thursday,” Ferrer told the county board on Tuesday.

She said that while the county received its first shipment of pediatric doses on Tuesday, it will receive a total of nearly 300,000 doses within the next week to 10 days.

There are approximately 900,000 children aged 5 to 11 in the county, according to Ferrer.

“We don’t anticipate any shortages and we expect there will be enough vaccines to meet demand,” she said.