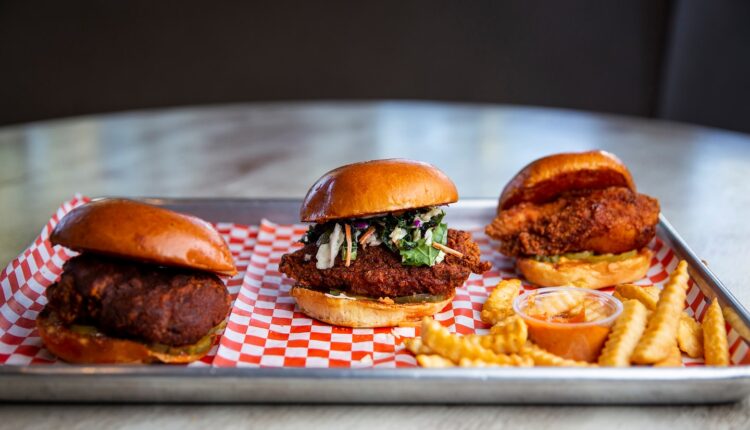 Today, you can find this same style of fried chicken, tinted red with fiery chiles, in almost every city across the United States. It’s sold at fast food restaurants and casual suburban brunch spots. Its flavor has inspired banquet hors d’oeuvres and instant ramen. In recent years, restaurants serving copycat versions of the dish have popped up across the globe. Demand specifically for Prince’s is so great that the family opened an offshoot, Hotville Chicken, in Los Angeles a few years ago. But the woman who invented hot chicken? Her name is lost to history, says Prince’s great-niece, André Prince Jeffries.

“No one kept records back then. All we can do is collect little pieces, trying to put this puzzle together. He was married five times, and him being a womanizer, we don’t know which one of them could have started it. But I give credit to the woman for inventing it,” Prince Jeffries says. “I give credit to my great uncle for keeping it going.”

Once Thornton Prince had a taste of hot chicken, he couldn’t get it out of his head. In 1936, some years after that fateful Sunday, and well after that woman had left him, he started a business with his brothers. When the BBQ Chicken Shack opened at 28th Avenue and Jefferson Street, it was the first place in the country to sell what has come to be known as Nashville-style hot chicken. It’s characterized by its deep red, craggy and crisp skin and mind-numbing intensity of flavor. (It’s often called 24-hour chicken, because it takes the average human body 24 hours to, well, work it all out.)

Separately, there are records of African Americans making insanely spicy barbecue. But Miller has found no documentation, no recipes, for hot chicken in the United States before Thornton Prince started selling it. That said, he says hot chicken was inevitable and fits neatly into soul food history.

“If you look at African American food traditions, the use of chiles and other hot spices has long been a part of the culinary tradition,” Miller says. “People often ask me, what’s the difference between soul food and Southern food? For one thing, African American food has tended to be more heavily seasoned, and there’s history behind that. At the time of European contact, West Africans were already eating warm spices in their food. Some were local to the region, others, like ginger and cardamom, were brought by Arab travelers. So by the time chiles arrived from the Americas in the 1400s, the West African palace was hard-wired to love them.”

Miller says that in North America, cayenne — a long, thin red pepper when fresh — eventually became the chile of choice because it was relatively easy to grow farther north. “We know that Thomas Jefferson was growing them in his garden in Virginia,” Miller notes.

But enslavers like Jefferson weren’t necessarily partaking of the chiles themselves. There was — and in many places, still is — a preference for the subtle flavors of French food among the upper classes. “Consuming hot, spicy food was considered low-class,” Miller says.

This idea was reinforced by the fact that enslaved African Americans often had chiles added to their food rations. “It was an attempt by their enslavers to mitigate disease,” says Miller. “Slavers did everything on the cheap, and they were intensely interested in preventive medicine, to keep their enslaved people — a very valuable commodity — healthy.”

So it was inevitable, Miller muses, that fried chicken would meet the heat of chile peppers in an African American kitchen. What wasn’t inevitable was that hot chicken would stay something of a secret — even for many Nashville residents — for about 70 years.

Prince’s BBQ Chicken Shack moved around a bit in its early days, stopping for a while in the North Nashville neighborhood of Hell’s Half Acre. Writing for Bitter Southerner, historian and author Rachel L. Martin — a White woman who grew up in Nashville but didn’t learn about hot chicken until she moved away — details how Jim Crow laws, systemic racism and entrenched segregation kept hot chicken in the city’s Black neighborhoods for decades. Last year, expanding on her initial reporting, Martin wrote “Hot, Hot Chicken: A Nashville Story.”

After Thornton Prince died in 1970, his brother Will ran the place. In 1980, having never operated a restaurant before, but with a keen desire to keep something of the family’s legacy alive, Prince Jeffries took over the BBQ Chicken Shack. She promptly renamed it Prince’s Hot Chicken Shack — “it never sold barbecue,” she notes — and expanded the menu to include multiple levels of heat, from plain to extra-extra-extra hot. Not long after, it moved to 123 Ewing Dr. in East Nashville.

“Those were some wild days,” Prince Jeffries remembers with a lot of laughs. “That parking lot used to be like a drive-in theater, feet hanging out the windows … everything went down after midnight.”

Sometime in the early 2000s, then-Nashville Mayor Bill Purcell discovered hot chicken, and become something of a hot chicken evangelist. Prince Jeffries credits him with spreading the word on hot chicken. “He really got to know us, and got the rest of the country to know us as the hot chicken capital,” she says.

In 2010, post restaurant critic Tom Sietsema went down to Nashville for a taste. Sietsema wrote that he’s “the kind of eater who thinks that jalapeños are for wimps and who always elects to go as hot as it gets on a Thai menu.”

“Still, I was not prepared for the fire that exploded on my tongue after I picked a piece of breast meat from its cradle of white bread and tugged at the chicken’s gritty-with-spices skin, staining my fingers a dark reddish-brown. Not that I hadn’t noticed several yield signs en route. My fingers tingled at the mere touch of the seasoning, and my eyes started tearing as the crust got closer to my face. … Ever tasted molten iron? Kissed the sun? Me neither. But ‘extra hot’ at Prince’s is what I imagine those sensations approximate. Like dynamite, the spices from Prince’s most volatile dish explode on the palate, torching every taste bud in their path in wave after wave of assaults. Within seconds, I’m crying, sweating and hiccuping — simultaneously.”

Sietsema lives to tell the tale, of course, and joins the hundreds of thousands of other lifelong fans.

For those who haven’t experienced the unique flavor of herbs and fruits in the capsicum family, the spicy heat of chiles varies widely. Its long been used medicinally — effectively and ineffectively — and to this day, the compounds found in chile are used to treat pain. Its culinary applications are well documented, particularly in Central and South American foodways. Roasting and drying fresh chiles can intensify their flavor and physical and psychological effects, which vary from person to person but usually include perspiration, watery eyes, respiratory distress, hives, skin irritation, heart palpitations, pain and its inverse pleasure.

“It’s true that people use it as an aphrodisiac,” Prince Jeffries says of her family’s chicken recipe, Chuckling, “but I only like to eat the mild, myself.”

Today, at 76, Prince Jeffries is taking a back seat in the business. Her daughter, Semone, runs the day-to-day. “All I wanted was to stay off welfare,” Prince Jeffries says about her desire to run her great-uncle’s business. “The important thing now is that we keep it in the family.”

There are, of course, many copycat hot chicken shops today. But if you can’t get to Nashville, there’s only one other place where you can get a taste of Prince’s hot chicken: Los Angeles.

In the early 1990s, Martin Prince, great-nephew to Thornton Prince, made the family recipe at a festival in Southern California, according to reporting from Mona Holmes in Eater LA. It was the first time the West had a taste of the true hot stuff, said Martin Prince’s twin daughters, Kim and Kelly.

In 2019, Kim Prince opened Hotville Chicken in Los Angeles’s Baldwin Hills neighborhood, using the family recipe. “It’s the only place outside of Nashville where you can get Prince’s hot chicken,” Kim Prince says.

At Hotville, there are four heat levels to choose from: West Coast Plain (no heat), Cali Mild, Music City Medium and Nashville Hot. The hottest, Nashville Hot, contains five types of chile pepper, and the recipe is such a closely guarded secret that Prince would only disclose one. “There’s cayenne in it, I’ll give you that,” she says with a laugh. The most popular order for first-timers? “Most people think they can handle the Music City Medium,” Kim Prince tells me. “And most people are wrong.”

Even people who love the tingly, three-alarm fire brought on by a generous dose of capsaicin are surprised at the levels of heat packed into a single piece of hot chicken at Prince’s or Hotville. “People in Nashville are used to it,” Kim Prince says, “but we have to watch people in LA After they take a bite, we wait to see their faces.”

Staff are trained to look out for the telltale signs of unbearable pain: sweating, coughing, reaching for napkins, gulping water (a poor choice), and tears.

At Hotville Chicken, the sandwich is the most popular order. It’s a more recent addition to the Prince’s menu in Nashville, too.

“I didn’t want to sell sandwiches at first,” Kim Prince tells me. “The original hot chicken is bone-in chicken pieces, quarters or eighths. But my business partner Greg Dulan, of Dulan’s Soul Food Restaurants, convinced me.”

In some ways, the sandwich is a natural progression from the original hot chicken experience. Hot chicken is traditionally served atop slices of white bread. The bread isn’t there just to look nice or soak up some of the chicken’s juices. “The chicken needs somewhere to land, you know, in your stomach,” Kim Prince explains. You’re supposed to eat the bread, which acts as stomach padding, eat some pickles, and then finish off the chicken. With a sandwich, you get it all in every bite.

But Kim Prince rarely orders a sandwich. And she agrees with her great-aunt on preferring the mild. “I don’t have all day to spend dealing with this chicken,” Prince says with a laugh. “We have a business to run!”