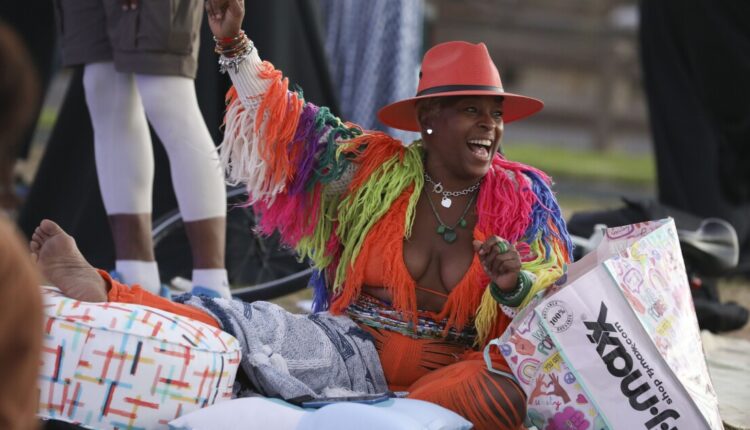 Renee and Elaine Barn’s eyes lit up when they recognized longtime friend and musician Tony Walk coming toward them.

It had been three years since they’d seen him, and now here he was at the South LA Pride festival.

“See, this happens all the time,” Elaine said.

The couple, who met 16 years ago while training at a maintenance supply store, had parked their folding chairs underneath a lone tree so they could get a front-row seat to the festival on Friday afternoon.

Around them, black and brown vendors sold beaded and wooden jewelry and clothing from wholesale shops. Attendees lay comfortably on blue-striped or pink and orange mats, placed on the grass to watch music and dance performances and other entertainment on a rainbow-colored stage.

So, when Renee and Elaine saw Walk make their way over, there were wide grins and hugs all around. They were among family and friends.

“For us, most of these people, we went to school with, we go to church with, we work with,” Elaine said. “So, when we have events like this, we not only have the opportunity of meeting new people but reconnect with our community.”

Friday marked the fourth annual South LA Pride, which this year took place at Norman O. Houston Park. The array of festivities worked to celebrate and provide a safe space for Black people, Indigenous people and other people of color in South LA’s LGBTQ+ community.

The first edition of the festival was held in 2017 at the Baldwin Hills Crenshaw Mall in Leimert Park, spearheaded by Los Angeles City Councilmember Marqueece Harris-Dawson.

“We want to be in public, and we want to be intentional,” Harris-Dawson said. “We want to push back on the resistance that is left, and that’s why we do it in a public way. There’s no better way to confront homophobia and exclude than with culture.”

Although previous renditions of South LA Pride were held during Pride Month in June, Friday’s event coincided with the 33rd annual LA Black Pride, which also is taking place over this Fourth of July weekend.

For the last three decades, Black Pride has taken place in July in direct response to the lack of diversity of the West Hollywood Pride celebration, said Jasmyne Cannick, who chaired this year’s South LA Pride. She said it is important for Black and brown LGBTQ+ individuals to see themselves represented in their own communities.

That’s why South LA Pride decided to hold its event as a community picnic at the Norman O. Houston Park, right off South La Brea Avenue. Organizers hoped that those driving through the intersection or walking alongside the park would see the rainbow-themed stage and tents as visible signs of the presence of South LA’s queer community. Jasmyne Cannick, right, chair of the 4th Annual South LA Pride Celebration, looks out at the crowd on Friday.

“We don’t wanna go to West Hollywood to be gay,” Cannick said. “We want to celebrate in our community and our own neighborhood.”

Abdullah “Abby” Hall, who serves as artistic director of the Tran Chorus of Los Angeles, based in West Hollywood, said that hosting South LA Pride helps to reclaim spaces such as the park, where queer communities of color have historically not felt safe and visible.

For them, it came as a blissful surprise to see city officials and community organizers working together.

“It’s important that we have this visibility in these spaces,” Hall said. “Not only so we can reclaim it, but so that we can let people within our own communities know that Black and brown queer-identified people know that we deserve space and a place just like everyone else.”

Billy West, who has been living in Los Angeles for two years, said South LA Pride is special for him because he had never lived in a place with a large queer-identifying population before moving to Southern California from State College in central Pennsylvania.

“It means the world,” said West, who had come to the festival with his friend Corshaalejayy. “You can come out and dress how you want to dress, be who you want to be. That feels good.”

Corshaalejayy said he often has driven by Norman O. Houston Park, and never expected South LA Pride to be hosted there.

He said that being queer can oftentimes be frowned upon and ignored within BIPOC spaces, especially within the Black community. So he was heartened that this year’s festival was taking place within a historically Black LA neighborhood.

“I just hope it gets bigger and bigger,” he said of the festival.

He sat on a blue and pink mat on the grass, with a rainbow tote bag by his side, taking pictures and videos of performers and acts on the festival’s main stage throughout the afternoon and into the evening. 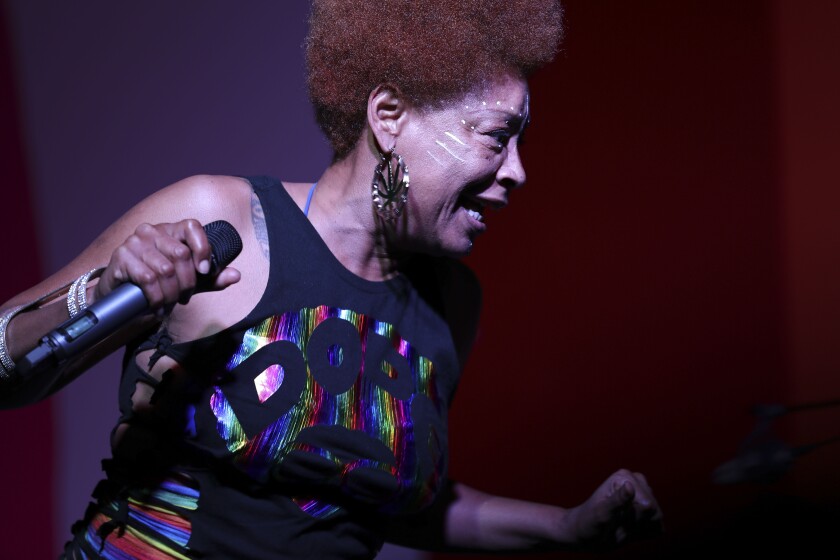 Medusa, who is regarded as a “Queen of West coast underground Hip Hop,” sang “Medusa (Put in Work).” Hall performed three songs with the Tran Chorus of Los Angeles, including “Victorious,” an uplifting original track that they also performed during YouTube Pride 2021.

“Those words that we say, ‘Every voice is a voice,’ is something that I’ve been saying since I began as artistic director,” Hall said. “People think that if someone is trans-identified, then they can’t sing soprano, or they can’t sing alto, or tenor, or bass. But our voices are something that we work with and fine-tune.”

A number of community organizations also took part in the event to promote and raise awareness of the services they provide in Los Angeles. One of them was Black Lesbians United.

Jeannette Bronson, who co-founded the organization, said that Black Lesbians is hoping to relaunch its annual retreat, which it had to suspend because of the pandemic.

“Everybody here is very accepting and warm,” she said of Friday’s event.

An array of local officials and legislators visited in the late afternoon to introduce themselves, including LA mayoral candidate Karen Bass, who is leading the vote count from last month’s primary race.

Bass, alongside several officials, emphasized the importance of events such as South LA Pride, which also raise awareness of some of the ways in which LGBTQ+ communities remain at risk. Following the US Supreme Court’s overturning of Roe V. Wade last week, there is growing concern that the right to same-sex marriage will be targeted next. 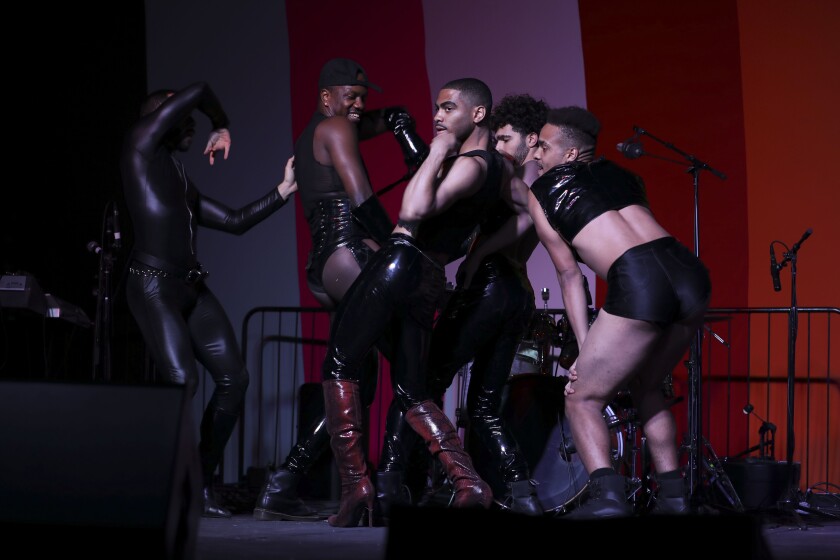 Cannick said it is important for those in the community to know the elected officials who represent them because they have a direct impact on their daily lives.

They’re the individuals that residents can notify about hate crimes, and share their thoughts on local issues.

“People need to know who to call,” she said. “These people aren’t God. You should have access to these people.”

Ivan Daniel, who co-hosted this year’s festival, pointed to three children who were sitting on mats with their mother. He let the children know that by attending the festival they were helping to build a better future.

“You’re the next generation,” he told them. “You need to let them know that we’re here.”