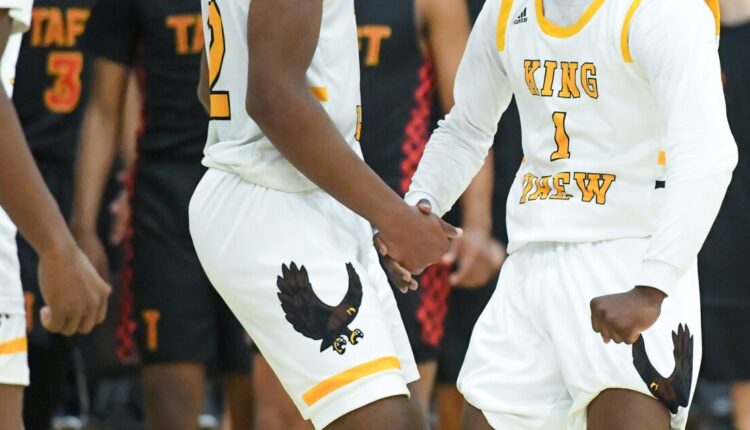 Hi, and welcome to another edition of Prep Rally. My name is Eric Sondheimer. During winter break, I took some quiet time to think of ideas that might be able to help out the sometimes struggling athletic programs of the Los Angeles Unified School District. I tried to think of positive ways to support coaches and athletes.

After sitting on a beach reading my favorite Michael Connelly book to refresh my mind, let me offer 11 ideas how to improve the district’s sports programs:

—Create an ambassador program. Teams should empower and give responsibility to individuals with great personalities and people skills to go out into the student body and invite shy freshman classmates to become involved with sports, whether as a participant or helper. The level of participation has been dropping, and it’s time to show you can have fun playing high school sports, make new friends and uncover new interests. For seniors and others, this can be their chance to demonstrate skills they’ll need in the work place, whether selling themselves or learning to speak in front of an audience.

—Establish a mentorship program for coaches. There are top programs in the Southern Section and elsewhere willing to open up and invite others to watch practices, attend meetings and discuss strategies and philosophies. Go watch a practice and compare notes. Take a day off to grow in the offseason and see if someone has a good idea that can help another program.

—Principals need to support coaches who are focused on developing student-athletes first. It’s time for coaches to stop solely catering to the players who might be future Division 1 athletes and start paying equal attention to the future doctors, lawyers and entrepreneurs in their programs. They’re playing for the experience and the lessons learned and deserve full attention, too. They might actually end up being better alumni than the so-called D1 athlete.

Here’s the link to complete ideas.

(Michael Owen Baker / For The Times)

Senior guard Kalib LaCount of King/Drew turned in games of 31, 26, 38 and 41 points to lead his team to the Huntington Park tournament championship. King/Drew defeated El Camino Real in its final game.

Sophomore Tyler Hunt of Venice was MVP of the San Fernando Valley tournament after leading the Gondoliers past Gardena in the championship game.

The Western League has been dominated by Westchester and Fairfax, but Venice is making the kind of weekly improvement to be considered a strong candidate to finish in third place and give the top two teams a good battle.

King/Drew is on a collision course to meet Crenshaw for the Coliseum League championship. 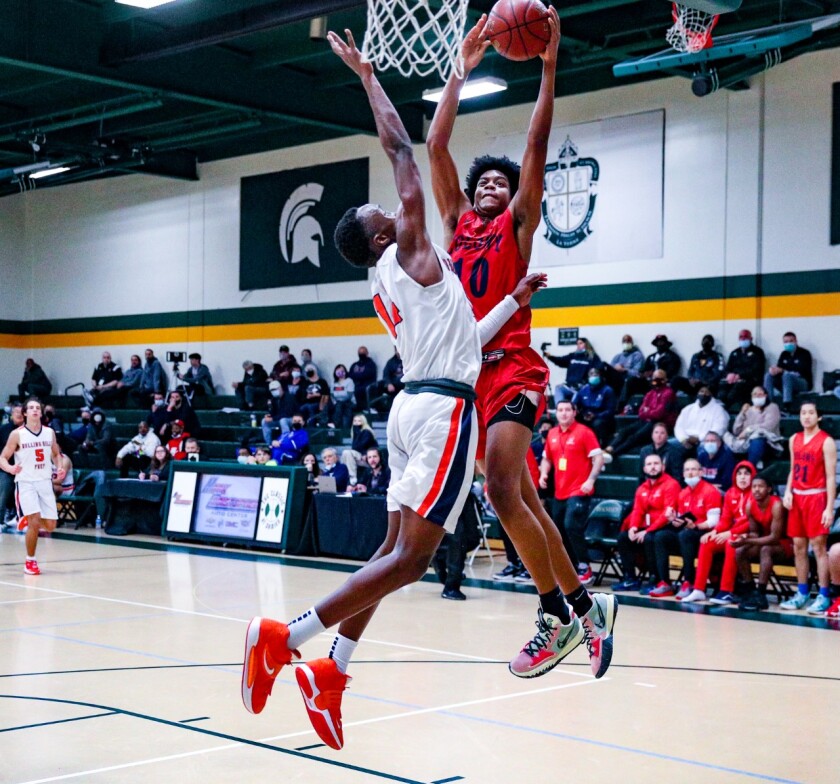 If Michael Jordan could become the world’s best basketball player after being placed on the junior varsity team in high school, there has to be a future for others even if some parents consider it a slap in the face not to make varsity as a freshman or sophomore.

The latest JV success story belongs to 6-foot-7 Jaden Henley of Ontario Colony High. He recently committed to Minnesota after playing for the junior varsity in 2020.

“I don’t know if I was OK with it, but it motivated me more,” Henley said of playing junior varsity. “My parents told me the same thing. They said if you want it, you have to get it.”

Henley, 17, had moved from Corona to Ontario as a sophomore and with Colony’s varsity loaded with top players, coach Jerry De Fabiis decided the best path for Henley’s development would be with the JV team. It turned out to be a fun season for Henley, who ended up growing from 6-3 to 6-7, which helped change his game. By last spring, Henley was comfortable playing on varsity even though few knew of him.

Here’s the link to the profile on his rise to prominence. The nights were cold. A mattress laid on the floor, lit by a nearby lamp. A space heater did its best to ward off the chill.

Thrust into single fatherhood when Jailynn was one after her mother walked out, he was living off a meager assistant coach’s salary at a junior college in Fresno. He couldn’t afford an apartment. They moved into the refurbished garage at the home of one of his friend’s parents.

Clayton was depressed for years, feeling pangs of guilt. Why can’t you give her a better life? Will she be OK without a mom? Why can’t you provide?

But Jailynn, who now plays for Clayton at JSerra, was happy as long as she was with her dad. When Clayton was feeling down, she’d give him a little pat on the back.

“I would literally live on the street with him if I had to,” Jailynn said.

Years later, the two share a unique mind-meld on the 8-3 Lions team. Jailynn, averaging 16 points, six assists and five rebounds a game, often predicts exactly when her dad will call a timeout.

A look at the Claytons and other father/daughter/son coaching duos.

Sherman Oaks Notre Dame pulled off the upset of the week, knocking off Harvard-Westlake 71-61 in a key Mission League game. The Knights rallied from a 10-point third-quarter deficit behind Ben Shtolzberg, who scored his team’s first 12 points in the fourth quarter and finished with 28 points. Here’s a look at the game.

Corona Centennial remains No. 1 in The Times’ Top 25 rankings. Here’s the link to rankings.

Santa Margarita won its 12th consecutive game with a win over JSerra in its Trinity League opener. Etiwanda and Sierra Canyon continue to be No. 1 and No. 2 in the Southern California high school girls’ basketball rankings from CalHiSports.com.

Both are unbeaten and had to have a pause because of COVID-19 health and safety protocols.

Here’s the link to complete rankings.

It was a tough week for indoor sports. There were numerous games canceled or postponed.

In recognition that January will be a challenging month, the California Interscholastic Federation announced that it was suspending its rule that prohibits playing games on Sundays. Winter sports teams affected by COVID-19 can schedule games on Sundays if both agree.

Stress is growing among players, parents and coaches because of the unknown. Here’s a look at how teams are being affected. 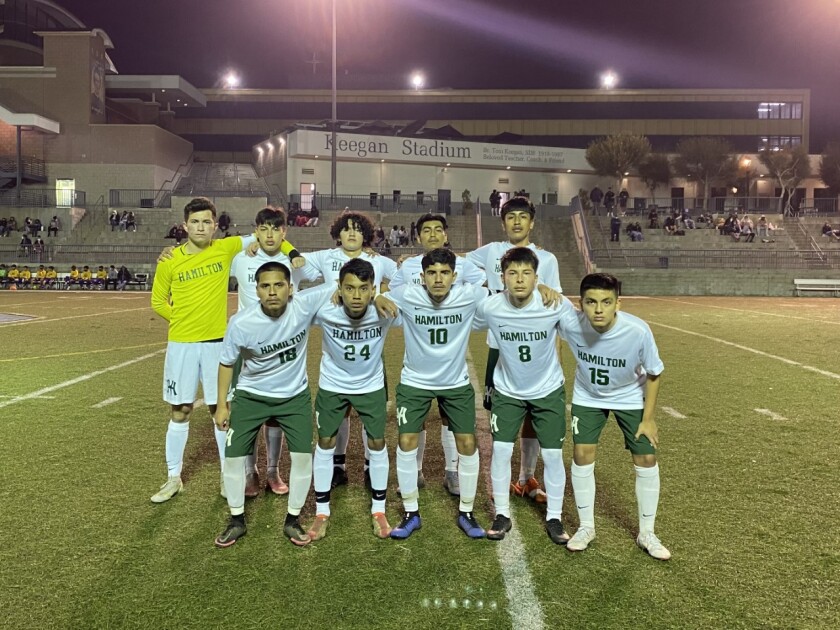 Hamilton won its soccer division at the South East tournament.

Oscar Garcia had four goals and five assists to lead Hamilton, which defeated Sotomayor in its final on penalty kicks. Birmingham defeated South East in overtime.

In girls’ soccer, El Camino Real picked up a win over Palisades in a battle of top City Section teams.

Junior swimmer Asia Kozan of Santa Margarita has committed to UC San Diego. She won the Division 1 200 IM as a sophomore. . . .

Former Servite principal Michael Brennan has been selected to be the president at Santa Ana Mater Dei, which has been facing a lawsuit alleging a hazing culture. Brennan will start on Feb. 1 and inherit an investigation into Mater Dei’s safety practices that the former president launched last month until he was sent back to South Bend, Ind. . . .

Monty McDermott, the athletic director at St. John Bosco who had been battling cancer, died on Saturday. He was 53. A 1986 graduate of St. John Bosco, McDermott was beloved by coaches and fans alike. . . .

From the archives: Amon-Ra St. Brown

Only a fourth-round NFL draft pick, Amon-Ra St. Brown became one of the best receivers in his rookie season with the Detroit Lions.

He was one of the best in California during his days at Mater Dei and continued his success with USC. The Lions lucked out that they found St. Brown available in the fourth round.

On Sunday, he set a Lions franchise record for receiving yards as a rookie. He set an NFL rookie record by recording eight or more receptions in five consecutive games.

Here’s a 2016 story on St. Brown and his brother, Osiris. On Sunday, it was St. Brown vs. St. Brown with the Lions taking on the Green Bay Packers and another St. Brown brother, Equanimeous. Amon-Ra got bragging rights with a 37-30 win.

From SI.com, a story that looks at the impact of the college football transfer portal.

From the Washington Post, officials say fan behavior is not improving.

From the New York Times, a school won 92-4, then the coach was suspended.

🚨ALL-TOURNAMENT SELECTIONS🚨
Congratulations to all of our 2021 Classic at Damien Recipients! You guys earned it!!!🔥🏀

If a player did not receive their All-Tournament Plaque & Hat please reach out to an Official Classic at Damien account!
1/2 pic.twitter.com/ZCXDVltxQM

Sylmar basketball coach Bort Escoto has been on his best behavior in recent years, but he still received his 27th ejection in 28 years last night. If he had to pay a fine for each technical, he might be on better behavior.

We are in total disbelief and deeply saddened in mourning the loss of our former player Dranel Rhodes. He was a genuinely kind hearted individual with an infectious smile whose unrivaled talent led us to greatness.
Our prayers are with his family in this tough time. #LL5 🕊💙 pic.twitter.com/mNkXoGd1My

Did you get this newsletter forwarded to you? To sign up and get it in your inbox, click here.

How do you know you are infected with Omicron?