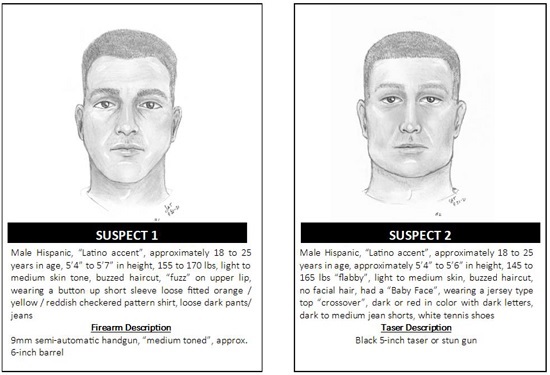 October 7, 2021 – The Santa Monica Police Department is seeking help from the public in finding two suspects in a shootout that took place in Ocean Park two weeks ago.

Police on Thursday released compositions of the suspects, who were described as two Hispanic men between 18 and 25 years old with Latino accents and “light to medium skin color”.

The shooting took place near 3 a.m. on Wednesday, September 22, near the corner of Ocean Avenue and Pacific Street.

The victim told police he was sleeping in his vehicle when the suspects “armed with a gun and a taser opened his door and asked for his car keys,” said Flores.

“There was a verbal argument” and “Suspect # 2 felt the victim, then suspect # 1 shot the victim in the face,” said Flores.

Suspect # 1 is approximately five to five feet tall and weighs between 155 and 170 pounds, police said. He has a buzzing haircut and “fluff on his upper lip”.

It had a 9mm semi-automatic handgun, “medium tone” and about a 6-inch barrel.

Suspect # 2 is approximately five feet tall and weighs between 145 and 165 pounds, police said.

He is described as “flabby” with a “baby face” with no facial hair. Like Suspect # 1, he wore a buzzing haircut.

He was wearing a dark or red jersey top “Crossover” with dark letters and dark to medium-sized denim shorts and white tennis shoes, the police said. He had a black 5-inch taser or stun gun.

KHN’s ‘What the Health?’: Abortion Politics Front and Center