Police kill three people in one day in Southern California 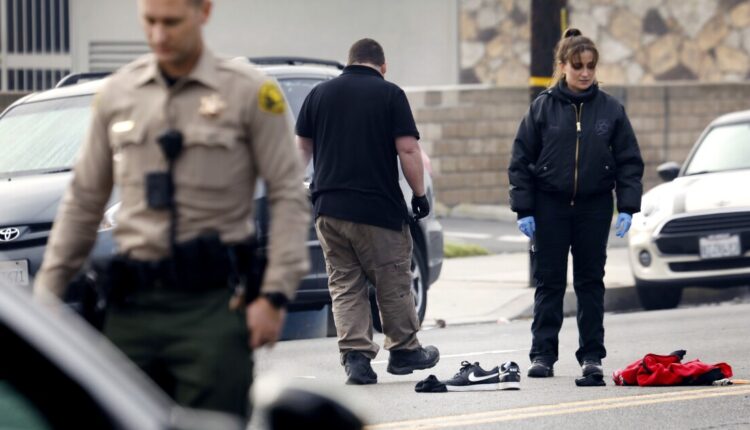 Police shot and killed three people and one officer was stabbed in a series of Southern California confrontations Thursday, authorities said.

A man armed with a garden claw was shot in a Los Angeles suburb, police in Anaheim killed a man armed with a gun after an hours-long standoff and a woman was shot at a San Diego condominium after she stabbed a police officer in the chest , authorities said.

After midnight in Bellflower, Los Angeles County sheriff’s deputies answering reports of illegal street racing were approached by a man who said he’d been stabbed by someone with a garden claw, the Sheriff’s Department said. The man pointed out his attacker, who ran off but was confronted nearby. He then came toward the deputies and was shot while swinging a 3-foot-long garden claw with spikes on it, authorities said.

The other man was treated at the scene.

In Anaheim around 10 pm Wednesday, a caller said a man was threatening a woman and might have fired a gun. Officers found the woman unharmed, but the 41-year-old man barricaded himself inside the home, Sgt. Shane Carringer said.

Police tried to talk to the man and convince him to leave the home peacefully, but he had a gun when he finally came to the door shortly before 4 am, and police opened fire, Carringer said.

San Diego police on the scene where an officer was stabbed in the chest during an attempted eviction. The woman was fatally shot by police and sheriff’s deputies.

A witness told the San Diego Union-Tribune the paperwork was an eviction notice.

The officers were met at the door by a woman holding a knife. She closed the door, and an employee at the complex told officers she had threatened a maintenance worker with a knife the previous day, Police Capt. Matt Dobbs said.

Authorities tried to talk to the woman for about 45 minutes without success before opening the door, at which point she stabbed a police dog handler in the chest with a large chef’s knife, Dobbs said.

“It went directly into his chest,” Dobbs said.

Three sheriff’s deputies and a San Diego police officer opened fire, killing the woman. The wounded officer was treated at a hospital and released, Dobbs said.

$35 Insulin Cap Is Welcome, Popular, and Bipartisan. But Congress May Not Pass It Anyway.