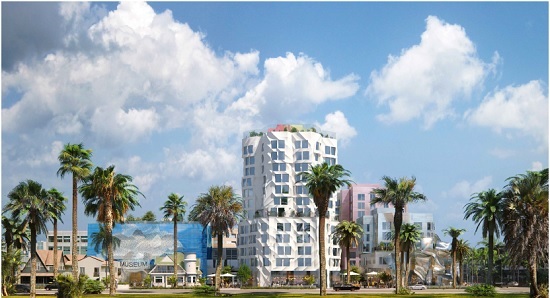 May 19, 2022 — “It is truly one of the most fabulous things in Santa Monica for the next century,” one public speaker tested.

“The buildings themselves are works of art,” said another. “Astonishing.”

And with an enthusiasm seldom seen in a City whose populace is skeptical of major developments, the Planning Commission on Wednesday unanimously approved a 316,750-square-foot project on one of Santa Monica’s most visible sites.

The mixed-use project designed by world-famous hometown architect Frank Gehry sits on five properties between Ocean Avenue and Second Street with an iconic view of Palisades Park and the Pacific.

Fifteen years in the making, the project includes a 120-room full-service hotel, 100 residential apartments that include 25 affordable and 11 rent-controlled units and a 35,500-square-foot museum that incorporates two historic buildings.

It also includes paseos that connect to the Promenade and replace unsightly alleys and a parking lot.

The design features Gehry’s famous organic structures with wavy lines and unexpected protrusions and reflective surfaces that somehow seem to naturally come together.

Added Commissioner Lambert, “I am thrilled. Mr. Gehry is beyond words in terms of the design he has come up with.”

Beamed via zoom from his studio, Gehry explained how he tried to “create a building that relates to the image of the city,” one that he would design for no place else.

“I really focused on the body language of the buildings having as much humanity to it,” he said.

The corner building, a jumble of reflective metal surfaces, “is a work on progress,” Gehry said.

“We wanted it to be a significant sculpture as well as an architectural usable space. I think it’s getting there, so I propose to keep working on it.

The Commission, who voted unanimously to recommend the proposed Development Agreement to the City Council, had little to say about the details of the design.

Instead, the Commissioners focused on whether it might be cheesy to charge $1 for access to the publicly accessible deck, deciding to only request donations that go to the Santa Monica Education Foundation.

They also nit-picked the use of two methods of measuring traffic — one focused on environmental impacts, the other on traffic congestion.

The congestion at one intersection, according to the Environmental Impact Report (EIR), is a “significant but unavoidable impact.”

And the Commission built in 200-feet of wiggle room in the lobby of the museum, which developer Jeff Worthe hoped would be dedicated to the world’s most famous architect, a prospect Gehry rejected outright.

“I really don’t want this to be a vanity museum,” he said.

Although Gehry will allow some of his work to be exhibited — he has a basement full of models, drawings and sculptural pieces — as long as its “not the central game plan.”

The project, whose building heights range from 58 feet to 130 feet is expected to be an economic boon for the City, generating $134.4 million a year in visitor spending, Worthe said.

“Our feeling and our hope is that we will create outside demand,” Worthe said.