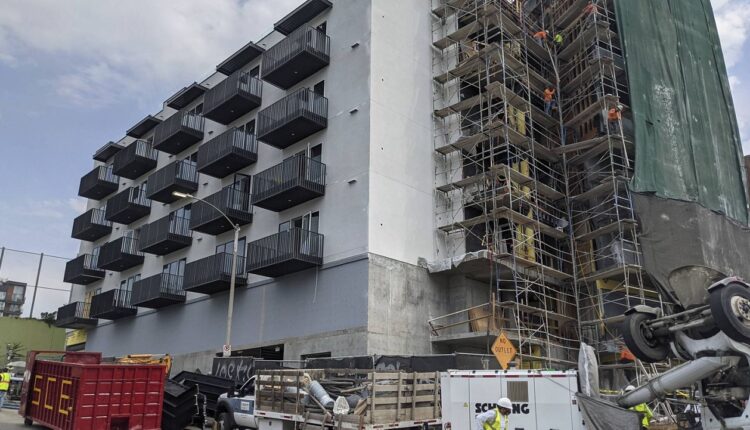 LOS ANGELES – A shortage of housing is primarily responsible for the ever-increasing house prices in LA. The city is short of nearly 500,000 units, according to the Los Angeles Housing Department. However, that is set to change with the city’s adoption of a new plan for House LA that could result in the construction of more than 250,000 residential units within the next eight years.

“The city of Los Angeles is facing perhaps the worst housing crisis in the country,” said Betty Barberena, LA urban planning assistant, during a meeting of the city planning commission Thursday to pass the plan.

LA is not only the most heavily rent-burdened and overcrowded city, she said. It also has the fewest homes per adult in any region in the country.

So the city is serious about building. Every eight years city planners are commissioned according to state law to update the so-called residential element in order to develop a construction plan for the production of apartments. This law requires local jurisdictions to identify their housing needs, restrictions, and options, and to develop a plan to develop the housing required.

All California jurisdictions conduct a Regional Housing Needs Assessment (RHNA) that indicates how much housing should be built. RHNA for Los Angeles determined that 456,643 units will be required by 2029. As part of this assessment, each jurisdiction must identify locations that can accommodate the housing it needs. And if not, these areas must be rezoned within three years in order to compensate for any deficits.

The Plan to House LA includes an inventory of the available land for possible housing. While the city said there is capacity to build all the housing units needed, realistically 230,964 will be built due to development barriers.

Only 17% of the land divided into residential areas allows for high-density multi-family housing development that enables affordable housing, Barberena said. But there are other obstacles as well: lack of financial resources for construction, a cumbersome and expensive process, rising labor and material costs and NIMBYism.

For its Plan to House LA, the city carried out a comprehensive assessment of individual districts in order to identify “areas with high opportunities” in which more housing could be built. These areas include the west, south and west of the San Fernando Valley, and northeast LA. However, these places also have significant environmental regulations such as sea level rise and fire hazards, city planners said. The housing plan therefore tries to reconcile areas with opportunities with ecological aspects.

Urban planners were quick to point out that just because a plot of land was identified as a candidate for rededication and development, it does not necessarily mean development. A lot more websites were served than required, they said.

According to the plan, ideal locations for cheaper residential development are along the main corridors and close to public transport.

While suitable lots have mostly been in areas near downtown and central Los Angeles, where higher-density apartment buildings already exist, the plan encourages adaptive reuse of buildings that are not currently being used for housing. It also calls for the construction of backyard duplexes that allow for more than one additional housing unit on larger lots and allow affordable housing on religious properties and on public land.

About a quarter of LA’s black and Latinx residents live in areas that are highly isolated and impoverished. Almost half of LA’s residents with disabilities live in the most segregated and under-resourced communities. White residents have by far the best access to neighborhoods with higher resources, the plan’s housing analysis found.

In order to combat social inequality and promote fair and affordable housing, the city pursued six concepts in its Plan to House LA: Housing stability / anti-displacement, housing production, access to opportunities, preventing and ending homelessness, improving the built environment and meeting needs of all Angelenos.

“This is a plan that is not going as usual,” said Vince Bertoni, Los Angeles director of planning. “This may be the first time we talk about a rededication of the city that focuses on environmental justice and the climate crisis we are in.”

The plan is due to take effect next February.

Problems with the supply chain in the port of LA? Kips Toyland isn’t worried