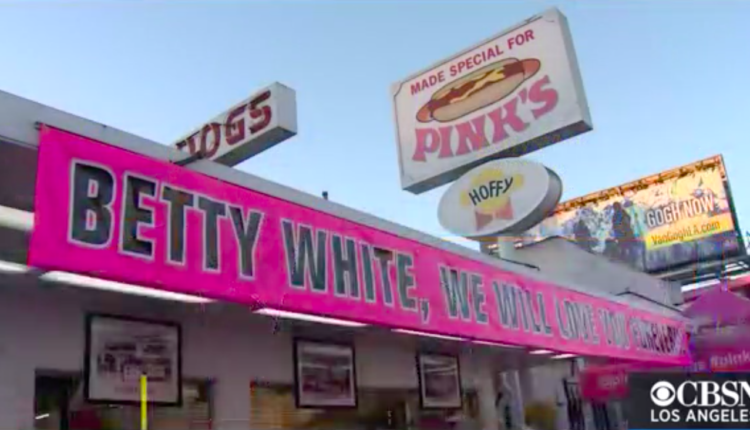 LOS ANGELES (CBSLA) – Following the death of iconic actress Betty White, there have been hundreds of memorials and allusions to the first lady of television in the past few days. White died on New Year’s Eve at the age of 99.

Over the next few days, however, the franchise plans to donate 100% of White’s namesake proceeds to the Los Angeles Zoo to honor the well-known animal rights activist and one of her favorite causes.

“Betty White, we will love you forever !!!” ⁰2 honors the legendary #BettyWhite, #Pinks donates 100% of the proceeds for 7 days for every #BettyWhite #NakedDog bought at #PinksOnLaBreaAtMelrose to the @LAZoo. #RIPBettyWhite @FOXLA pic.twitter.com/cqAPrjYIKD

Pink’s Hot Dogs owner Richard Pink told CBS reporters why Betty White meant so much to him and why he wanted to pay a special tribute to the Hollywood icon: “Betty White helped open one of our locations on the City Walk ten years ago, by putting a hot dog in front of Pink’s and saying, ‘I like it naked! I like it when nothing is on it – just the beef and a bread roll. “

Malka Media wants to bridge the media and financial worlds