Pickleball’s In A Pickle: Too Few Places To Play In LA 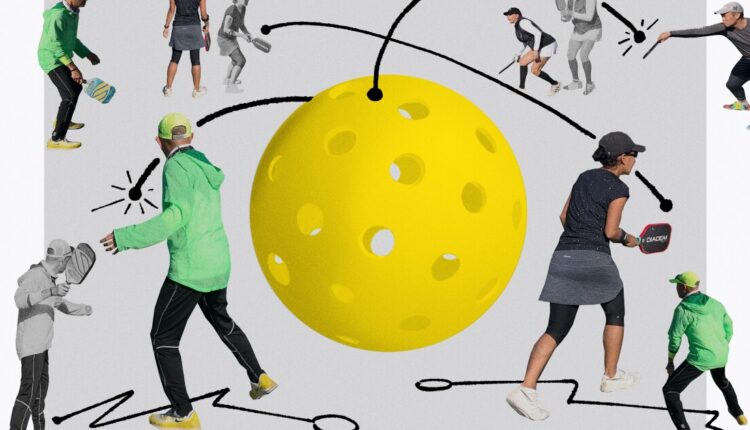 Endorsements from celebrities like Larry David and Leo DeCaprio didn’t hurt, either.

But that rise in popularity comes with some growing pains. Players hooked on pickleball are demanding more places to play, especially in the vast Los Angeles city parks system, where change comes slowly and the rise in pickleball can be seen as a threat to the dominance of tennis.

Players at the Liberty Park pickleball court reserve a space in an upcoming game by stacking their paddles in piles of four.

The numbers tell the story. With some 16,000 acres of parkland and 559 park sites, the city’s website for locating pickleball courts includes just seven places, of which six are in the San Fernando Valley and one in Montecito Heights, northeast of downtown.

LA County parks are not much better, with just one dedicated pickleball court (Farnsworth Park in Altadena), out of 181 county-run parks.

While some players use portable nets on basketball or tennis courts or other slabs of flat concrete, dedicated courts are the gold standard.

The Press For More Courts

Pickleball advocate Nicky Hart has been trying to get the city to add more courts. A retired sociologist who taught at UCLA, she sees pickleball as a sport that can erase age and gender gaps in who gets to play in parks across LA

“It’s what we call a moderately vigorous physical activity. It’s really good for people’s health to play regularly in a sport which also helps to generate new social networks, so it builds a kind of web of community around the players,” said Hart.

It’s also a good use of scarce space in smaller parks. Two pickleball courts can fit in the space of one tennis court, which means eight people can play in the space occupied by two or four tennis players.

And it’s an egalitarian sport, where players of different levels can play together, and politely take turns vacating courts for other players to get a game. In some parks, players stack their paddles to claim the next open court. Hart said the city of LA provides only about six hours a week for pickleball at the Venice paddleball court nearest her home. (The hours are so limited Venice doesn’t even show up on the city’s official list of places to play.)

So she heads to courts in other cities, like Santa Monica, or in Orange County. She envies the courts in small cities like Monterey Park, Manhattan Beach and El Segundo.

“A lot of LA residents go to these places to play pickleball because they don’t have anywhere, by and large, to play at home,” said Hart.

LA has been too slow to add pickleball courts to city parks, she said. Hart sent the parks director a petition signed by more than 200 players who live in LA but play outside the area, asking for more courts.

“I didn’t get a response to that,” she said.

In case you missed the growing buzz around pickleball over the past two years — it’s gotten a ton of national press — here are the basics.

Cover of the new magazine, IN Pickleball takes an InStyle approach to the sport

Pickleball is a kid’s version of tennis, and easy to learn. You’ve got your lobs and dink shots and volleys, as well as drop shots and overhead smashes. And it’s played with a perforated plastic ball in a smaller space than tennis, so it doesn’t hurt when it hits you, and you don’t have to run as far when you miss a shot. There are no special shoes or clothing rules, although there’s still room for fashion.

The etiquette at public courts calls for groups of four players to rotate in to play as soon as a game ends.

“There’s an accepted kind of norm that everyone should play, and people should just take their turn,” said Hart.

“So you end up playing with all sorts of people that you may know well or not so well. Even different (levels) of players can be on the same court. And there’s generally speaking a high degree of tolerance for those [of different] sporting talent.”

That was my experience in my first week of play at a few pickleball courts around LA County. At Liberty Park in Cerritos, players waiting their turn to play practice their dink hits and hang out in lawn chairs.

At Liberty Park in Cerritos on a Thursday morning, the two courts were busy with doubles play, and a dozen more people were sitting in lawn chairs waiting and socializing before their next game.

At Allendale Park in Pasadena on a busy Sunday morning, Mike Alvidrez, an ambassador from USA Pickleball, invited me to attend some free lessons. (I guess he figured out I was new to the game.) 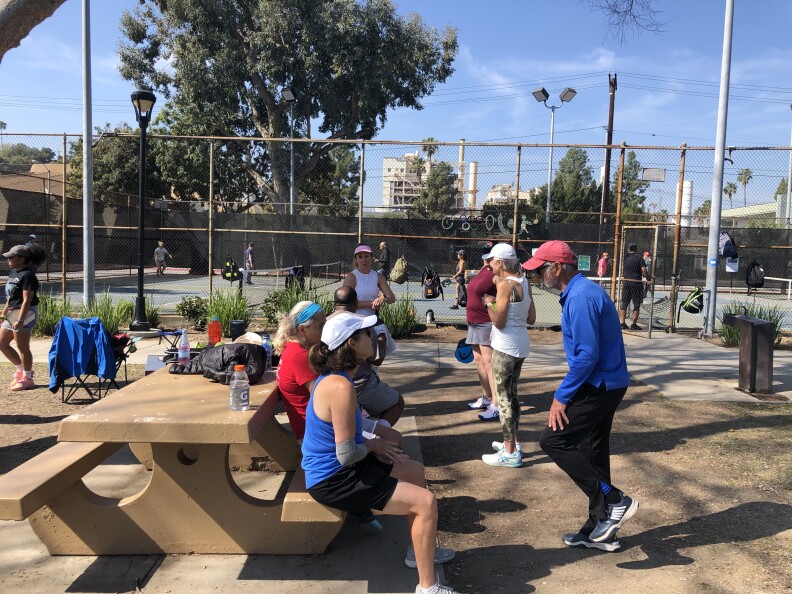 Mike Alvidrez, an ambassador for USA Pickleball, socializes outside the Allendale Park pickleball courts in Pasadena

And at LA County’s Farnsworth Park, I found a game right away with a highly-skilled trio of players who made me feel included, despite my lower skill level.

Pickleball has been around since 1965, so the concept isn’t new to LA city Recreation and Parks. But as it began soaring in popularity, so did the pandemic. Early on, park playgrounds and indoor play spaces were closed as a precaution. Outdoor tennis and paddle courts reopened in mid-2020, but officials and staff were still diverting their attention to the spread of COVID-19.

It wasn’t until Nov. 2021 that the city responded to pickleball’s popularity by creating a committee to look at where and how new courts could be added.

“As of right now, we don’t really have a lot of dedicated pickleball courts,” said Jimmy Kim, the city’s acting assistant general manager for recreational services. He acknowledges that the Recreation and Parks Department has some catching up to do.

“We’re getting some requests from South LA and our Metro and East LA areas as well,” Kim said.

But so far, the city’s approach to new courts appears to be a zero-sum game, where any addition of pickleball takes away from tennis, the sport whose play area is most similar to pickleball, with its existing nets and fenced off spaces.

“Tennis players, they don’t want to give up their courts, right? And the pickleball players, they really have nowhere to play,” Kim said, describing the debates he’s heard.

At many places where pickleball is played on tennis courts, the hours for pickleball can be limited to just a few hours a week. This sign is at Darby Park in Inglewood, where the tennis court has striping for both tennis and pickleball, and where portable nets are used for pickleball.

Tennis Need Not Be Sacrificed

But there are other options for creating spaces to play pickleball rather than converting tennis courts. I described the courts at Cerritos to Kim as an example. They take nothing from tennis because they’re on a concrete slab in the middle of a grassy field and a walking track. Kim seemed surprised at the possibilities, given that LA has many thousands of acres of park space.

“We were kind of looking at just tennis courts, but theoretically, you could use (other surfaces) whether it be a basketball court [or] a parking lot,” he said.

But don’t expect a big expansion of pickleball courts anytime soon, given the slow process of change in city government.

Political, Marketing And Other Obstacles

There’s another potential obstacle to pickleball occupying more tennis courts. LA28, the organization staging the 2028 Olympic Games, is giving the city $160 million to beef up youth Olympic-oriented feeder sports — including tennis — to make them more equitable and affordable. That means courts will be busier with young players, and it might be harder for pickleball people to get court time.

Basketball courts may be another option. Some players could envision the city’s many courts re-striped so pickleball could be played early in the day when the courts are not in high demand for basketball. That’s when a lot of retirees enjoy playing.

But there might be a problem with that strategy, Kim said. The LA Clippers recently paid the city $10 million to refurbish city basketball courts, and might not want to see that work marred by additional pickleball striping.

Meanwhile, smaller cities, which are far more nimble and responsive to residents, are adding new courts all the time — and hosting more and more players from the pickleball desert of LA 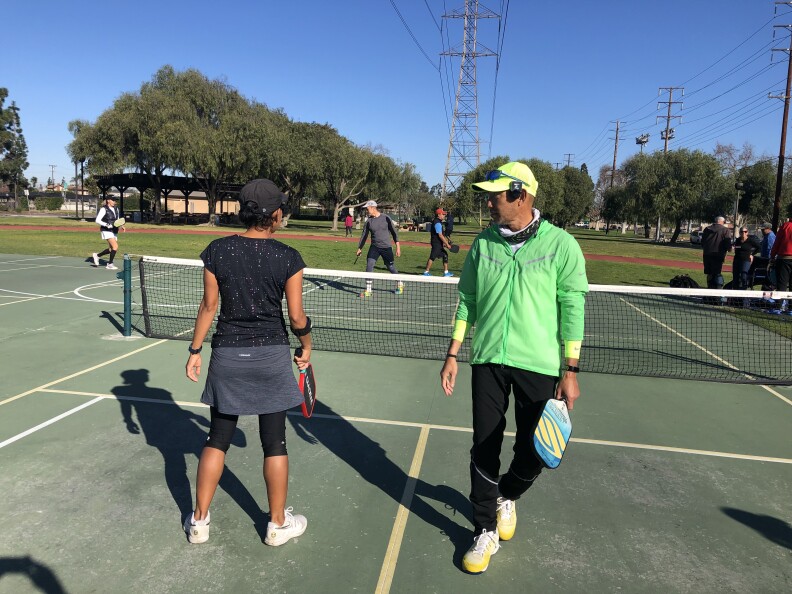 Caroline Wong and Leo Tan confer after losing a point in their pickleball game at Liberty Park in Cerritos.

What do you want to know about how we Play in LA?

Health Care Firms Were Pushed to Confront Racism. Now Some Are Investing in Black Startups.