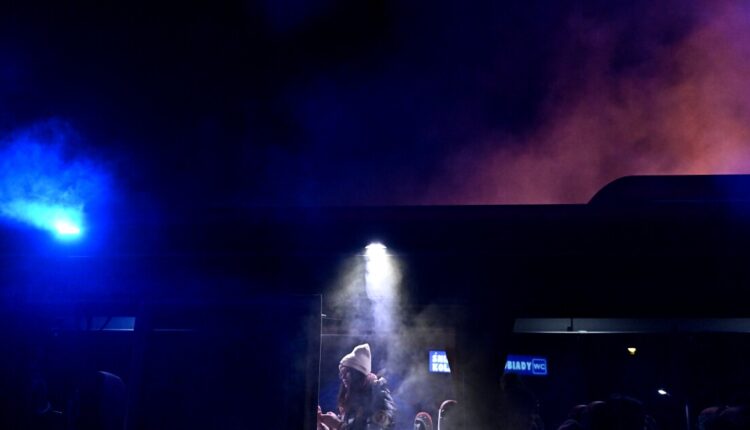 Ukrainian refugees have flooded into European Union countries in recent days, with about 787,300 people fleeing to Poland and 30,000 to Germany, the authorities in Warsaw and Berlin reported Saturday.

More than 11,000 have also been recorded in Italy, most of them crossing the border with Slovenia, according to the Interior Ministry in Rome.

The Times’ Wally Skalij gives a first-person account of what he is seeing in Poland.

A mother and son wait on a bus at the border in Medyka, Poland, after fleeing Ukraine. Refugees walk past a cemetery in Medyka, Poland, after crossing the border from Ukraine.

“All these people passing, they have heard bombs, cannons, MIGs, now I want them to hear music,” said Davide Martello while playing Simon & Garfunkel’s “The Sound of Silence.” “And I also want to send a message of love to Vladimir Putin. Maybe it’s going to open up his heart a little bit. I do not know.” A woman smokes in front of a bus carrying Ukrainian refugees at the border in Medyka, Poland. Refugees hold each other as they talk to an officer in Medyka, Poland, after crossing the border from Ukraine. Refugees were given food and clothing and were taken to a shelter nearby. A refugee family from Ukraine eats in Medyka, Poland.