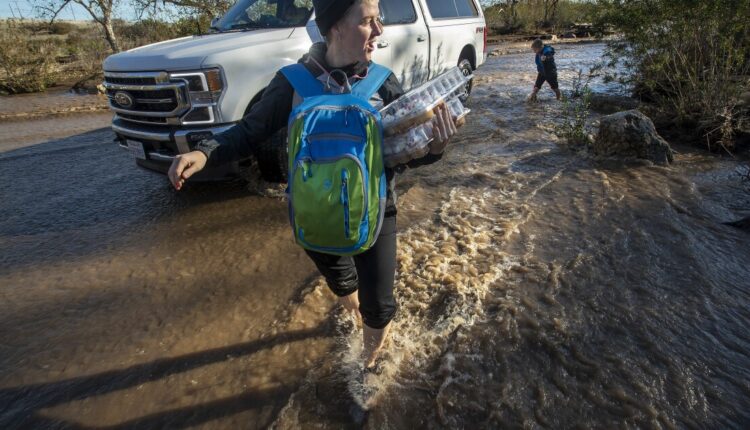 With more than 5 inches of rain in December, Los Angeles hosted another winter storm on Wednesday that promises to bring even more moisture to the area by New Year’s Eve. 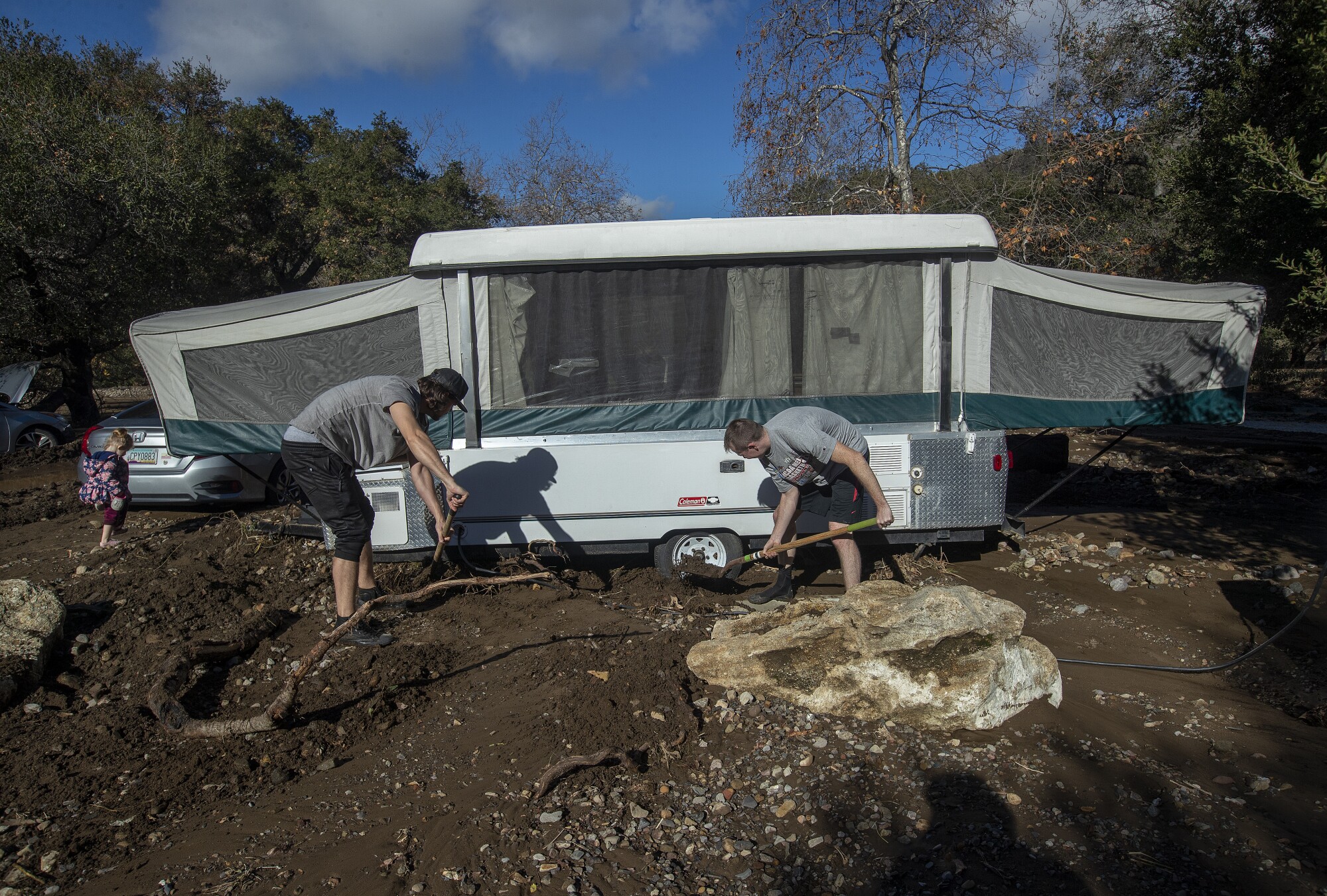 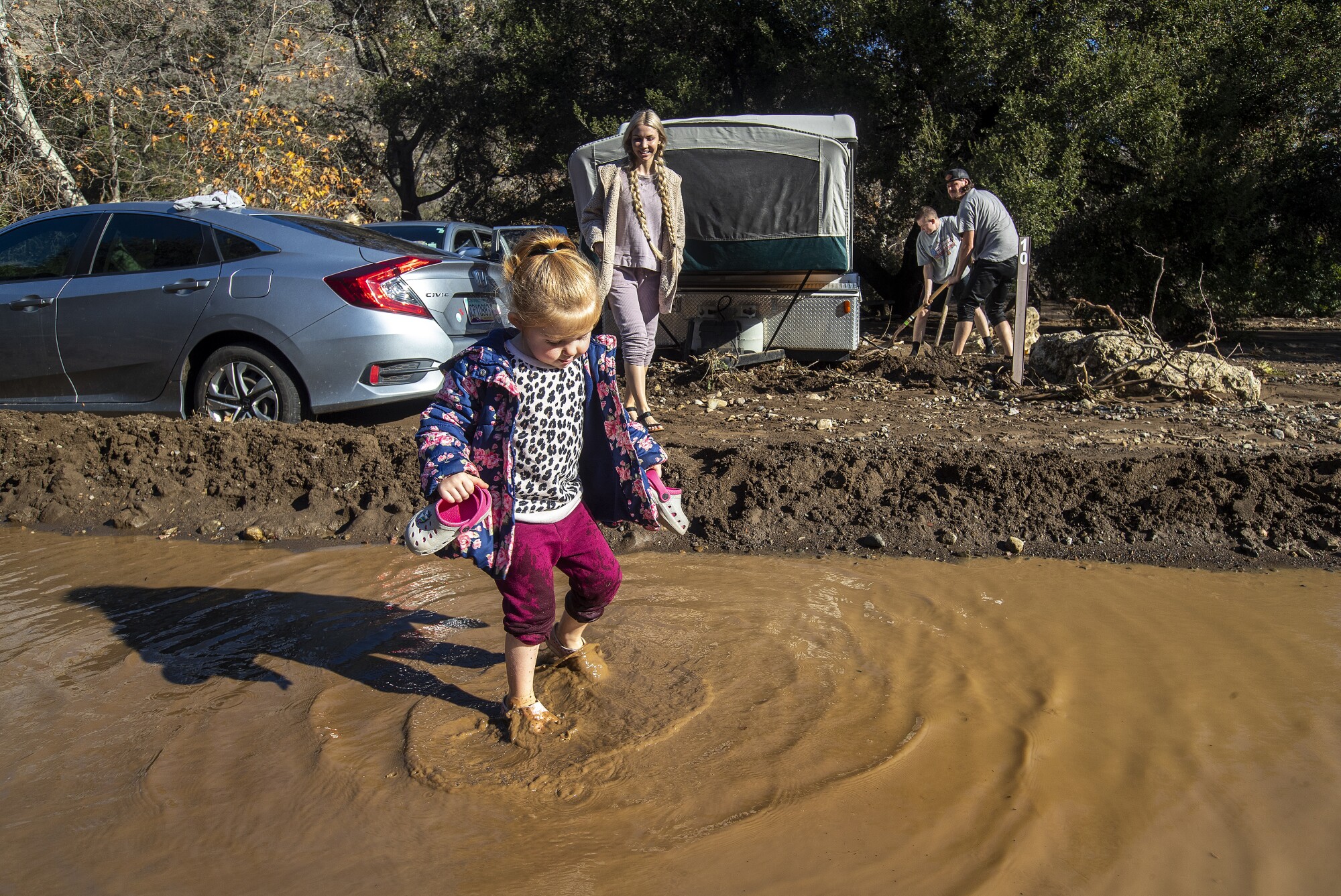 Nevaeh Allphin, 3, plays in a recent rain water flow at Leo Carrillo State Campground in Malibu while her mother Justine keeps a close eye on Friday. 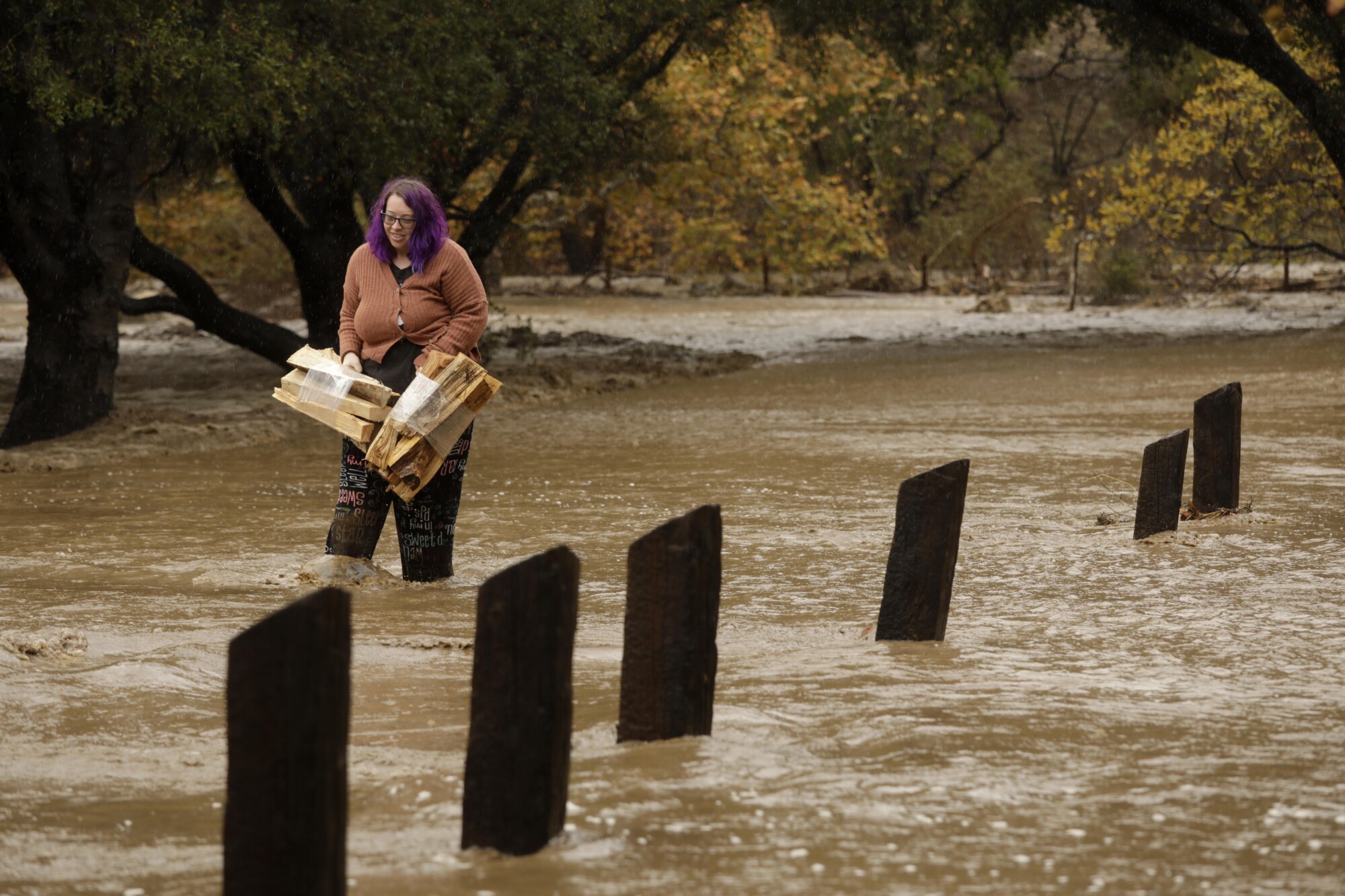 On Freeway 5 heading north, traffic will turn around shortly before Gorman on Thursday. The Autobahn 5 was closed due to snow. 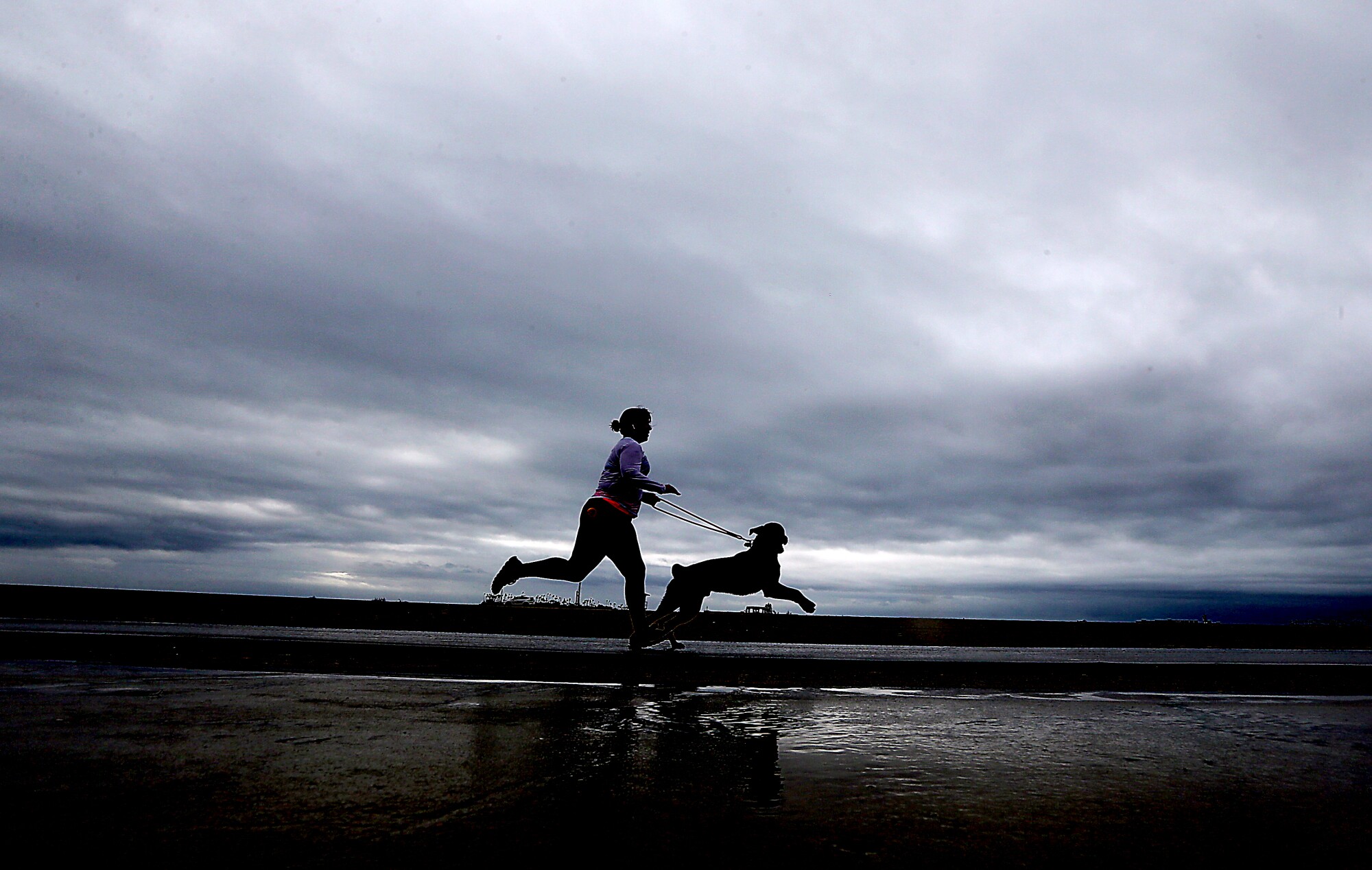 Storm clouds throw heavy rain on Rosie’s Dog Beach in Long Beach, where a jogger and dog are running on a rainy Thursday afternoon. 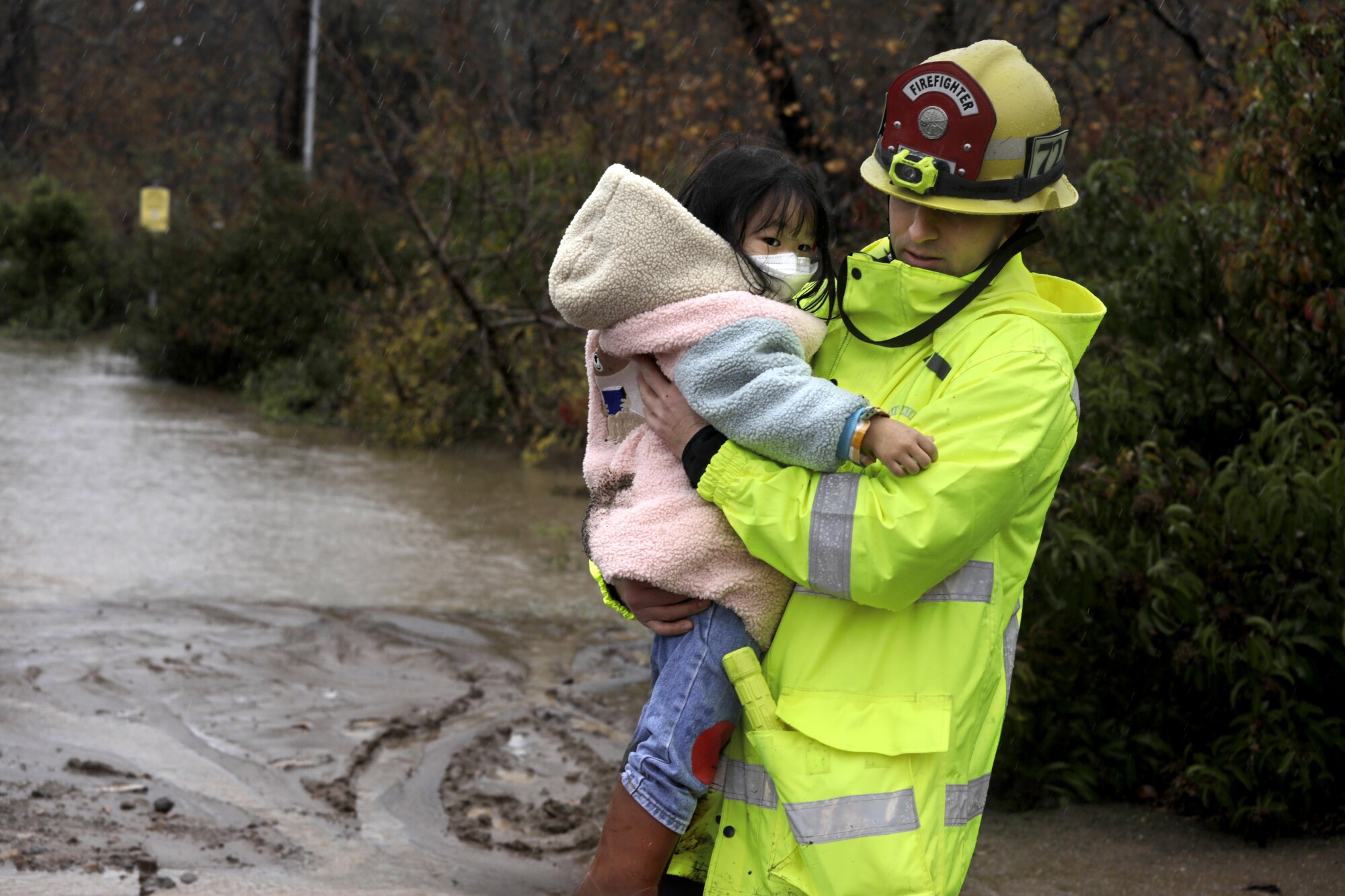 A firefighter helps evacuate Evelyn Jung and her family from a flooded area at Leo Carrillo Campground that was inundated during heavy rainfall in Malibu. Justus Vincent, 12, center, and his sister Hope Vincent, 10, help their parents place stones along the wall to prevent floods from reaching the foundation of their home in Silverado Canyon 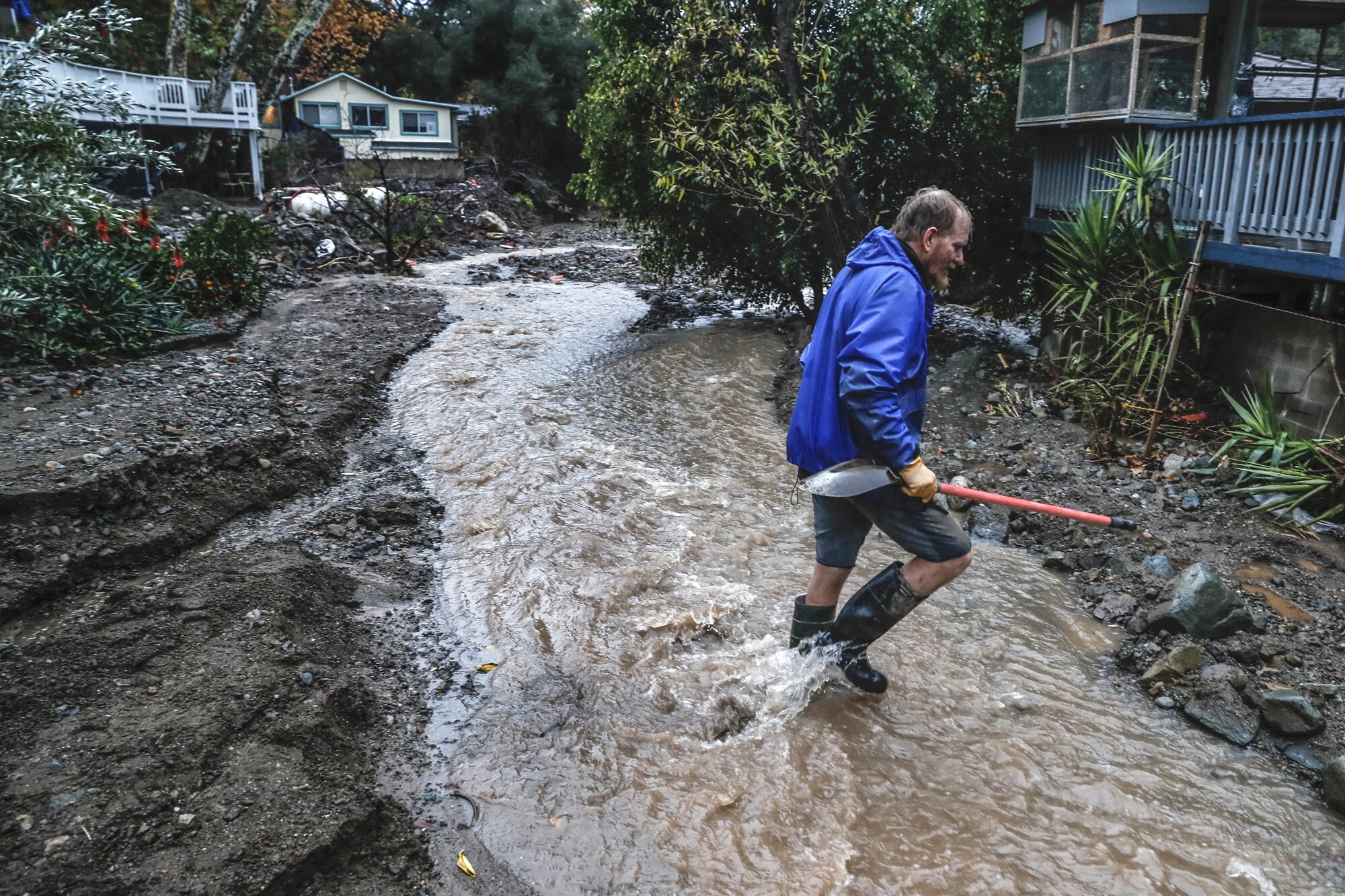 Mitch Vincent watches a rising stream of water threatening his older parents’ home in Silverado Canyon on Wednesday. Vincent visited his relatives over the holidays and, together with his wife, built temporary barriers behind a retaining wall to divert floods from the house. A pedestrian walks with an umbrella on Long Beach on a rainy Wednesday. 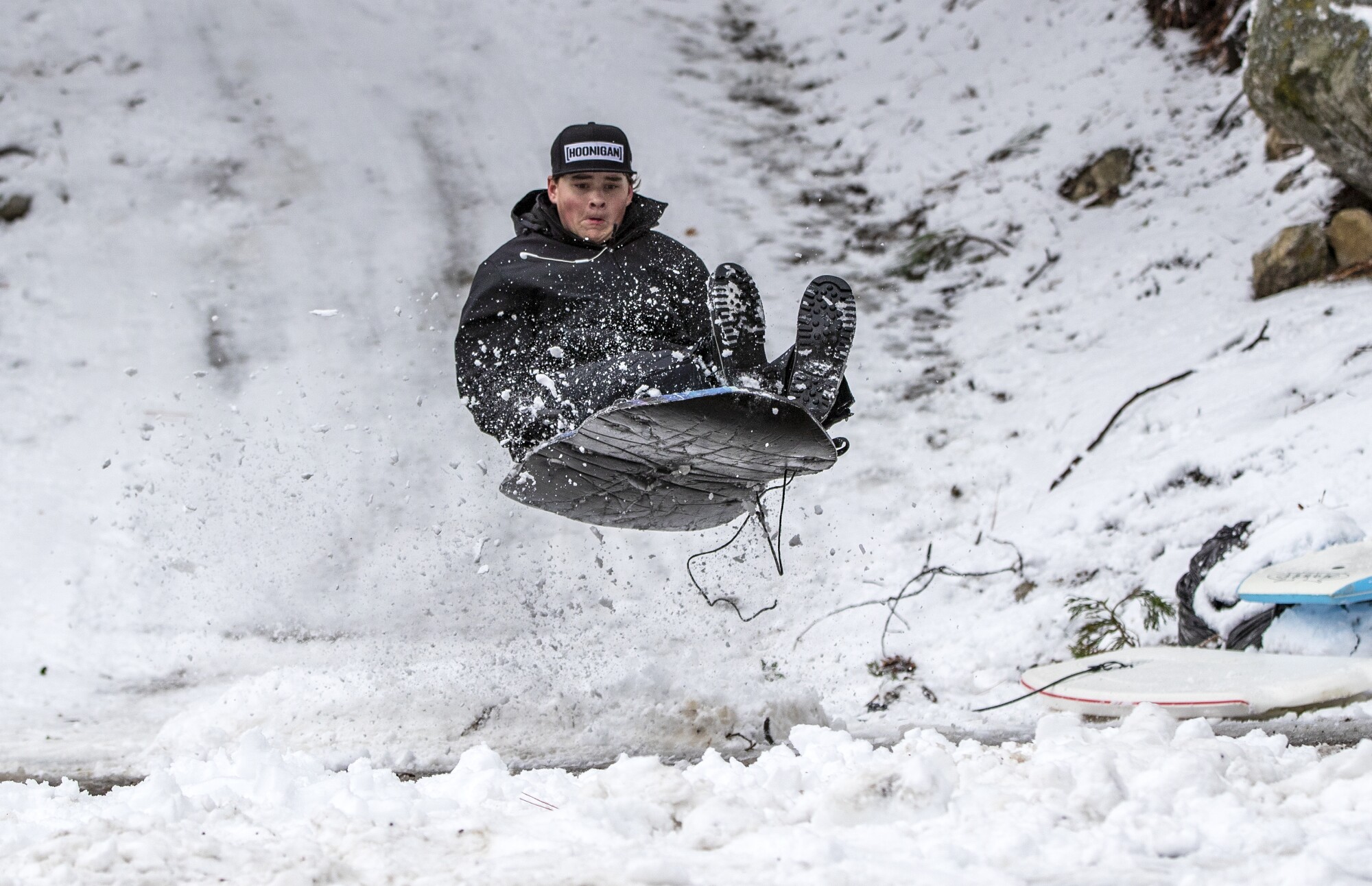 Matthew Eastman, 15, of Forest Falls sled off a jump he built at the end of his driveway after a winter storm hit the San Bernardino Mountains on Monday. 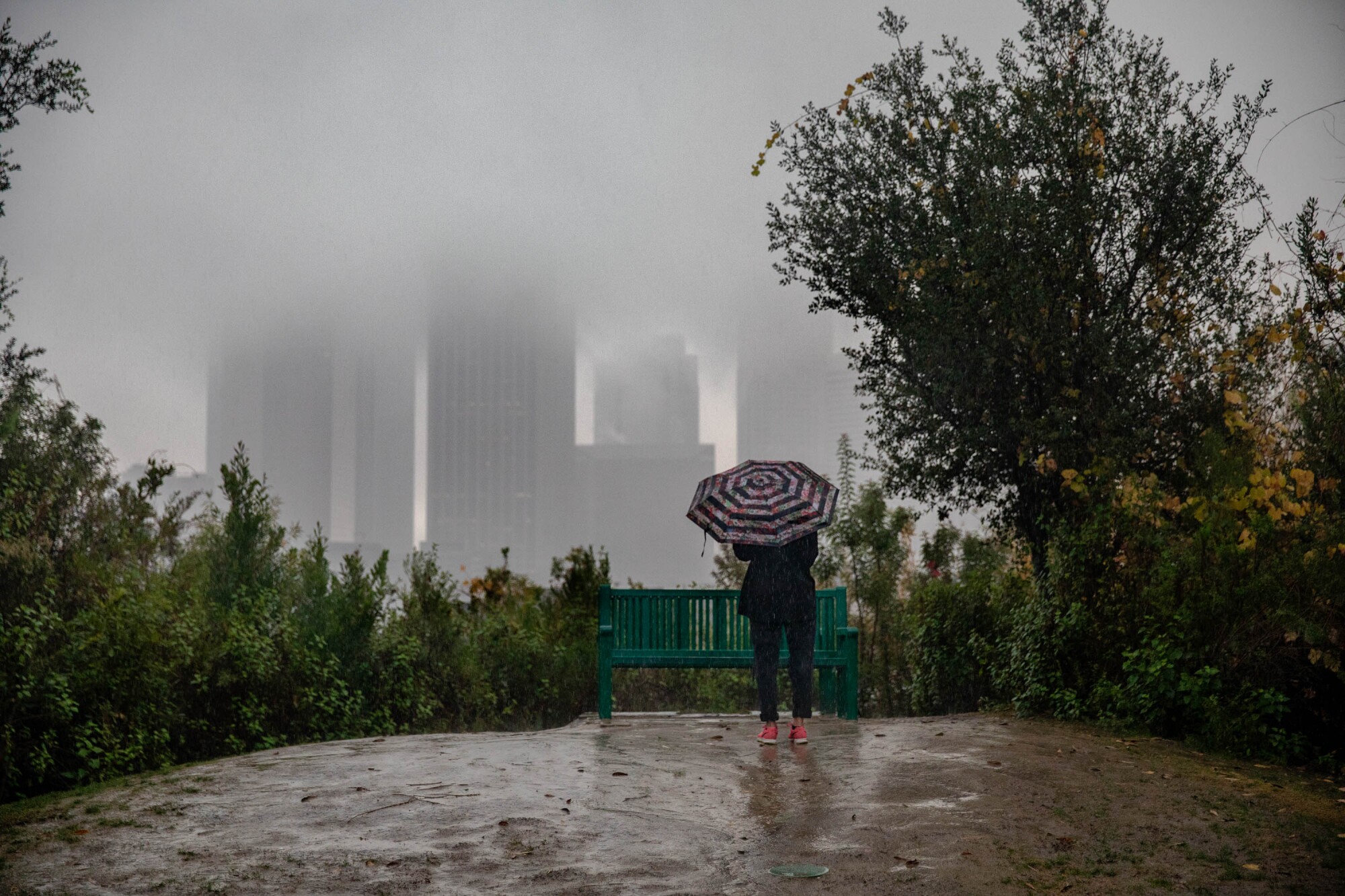 Maria Fernandez of Arcata enjoys a view of the LA skyline obscured by fog from Vista Hermosa Natural Park as it rains on Monday. 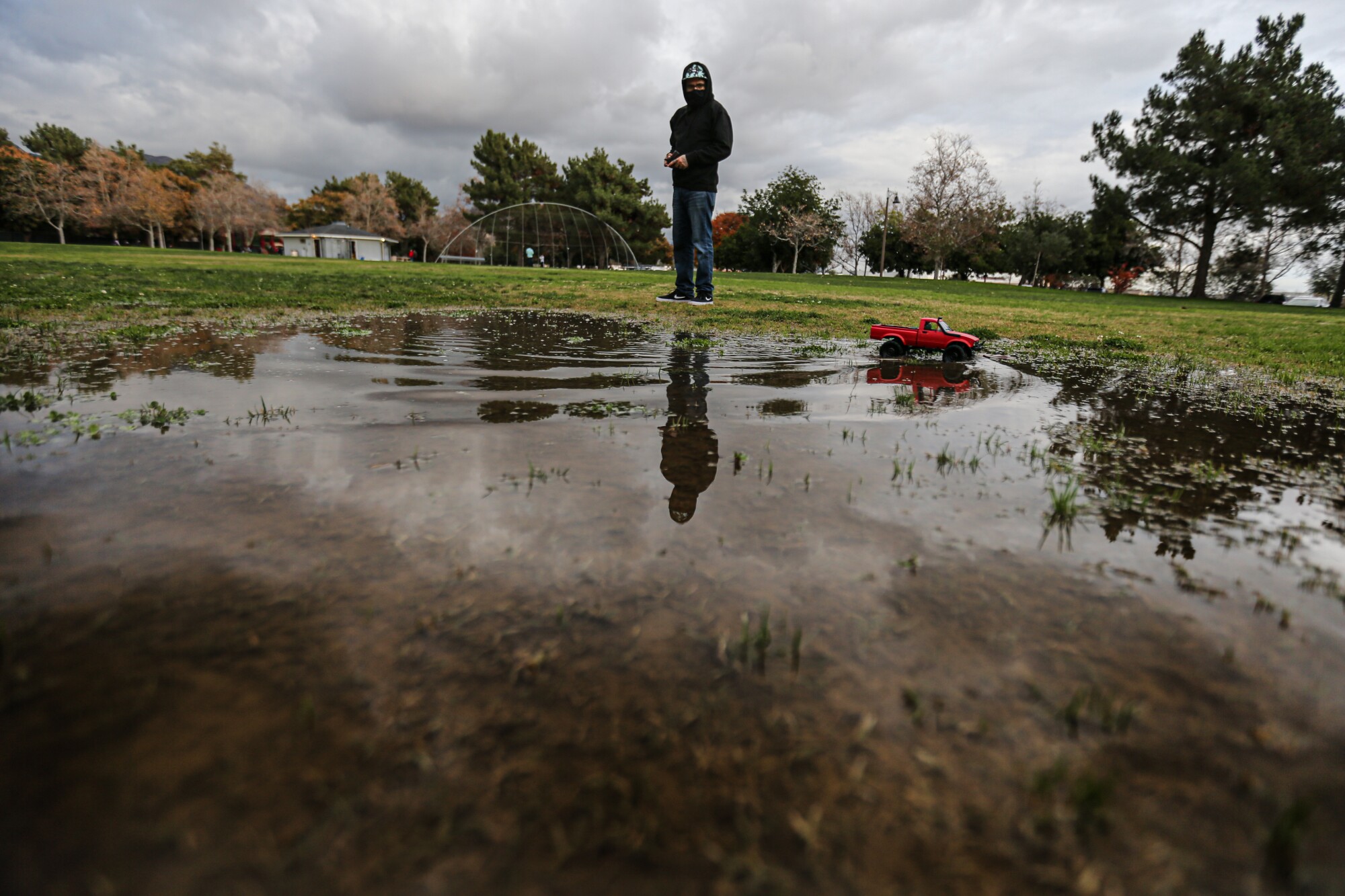 Gerry Baltierra directs a remote-controlled car through a puddle in Encanto Park in Duarte on Tuesday. 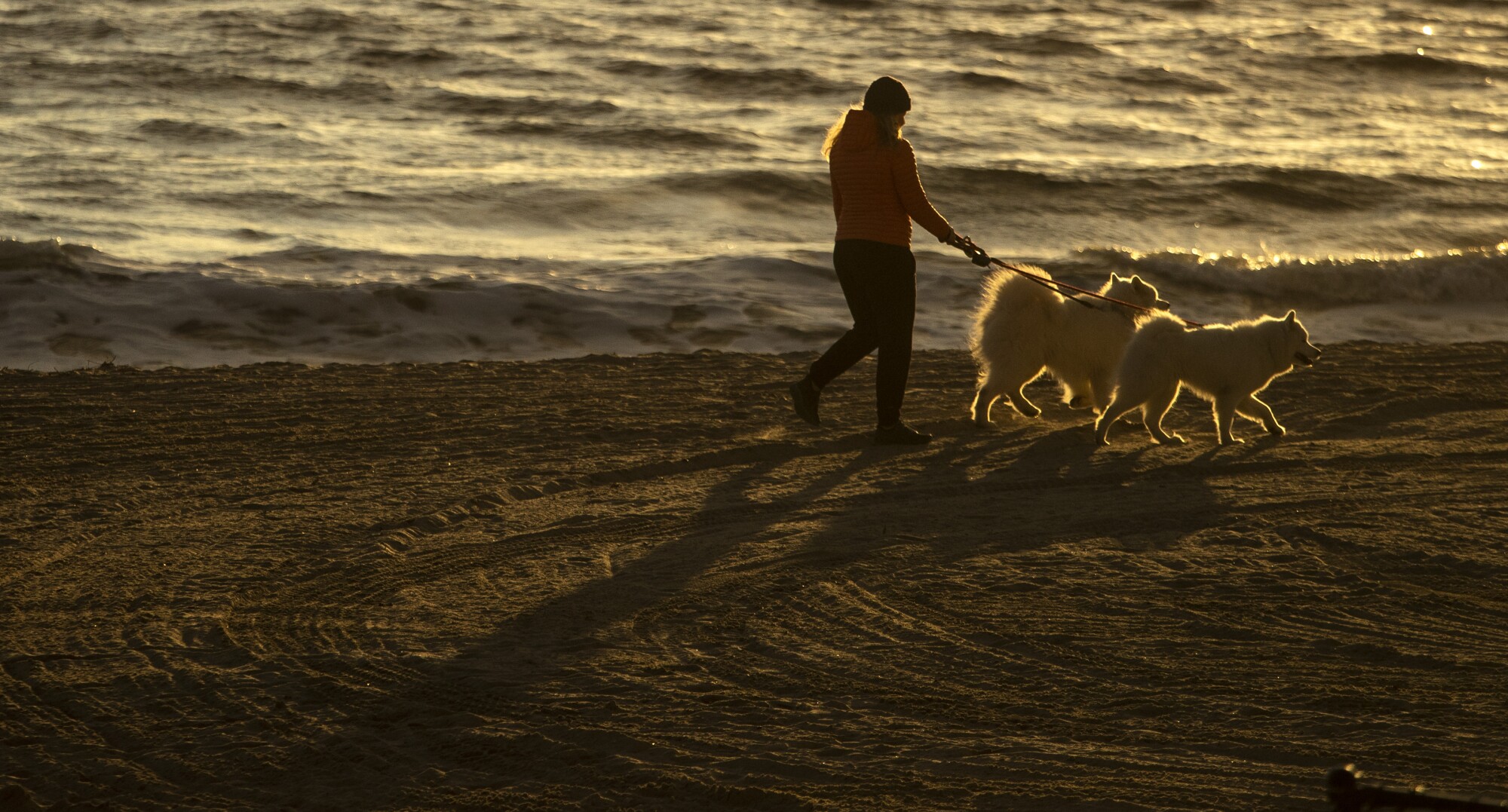 Karyn Williams from Santa Monica takes her dogs Kristoff and Maggie for a walk on the beach at Will Rogers State Beach on Tuesday in Pacific Palisades. Ying Ten ends a fishing day on Tuesday when the sun sets and the Santa Fe Dam glows. 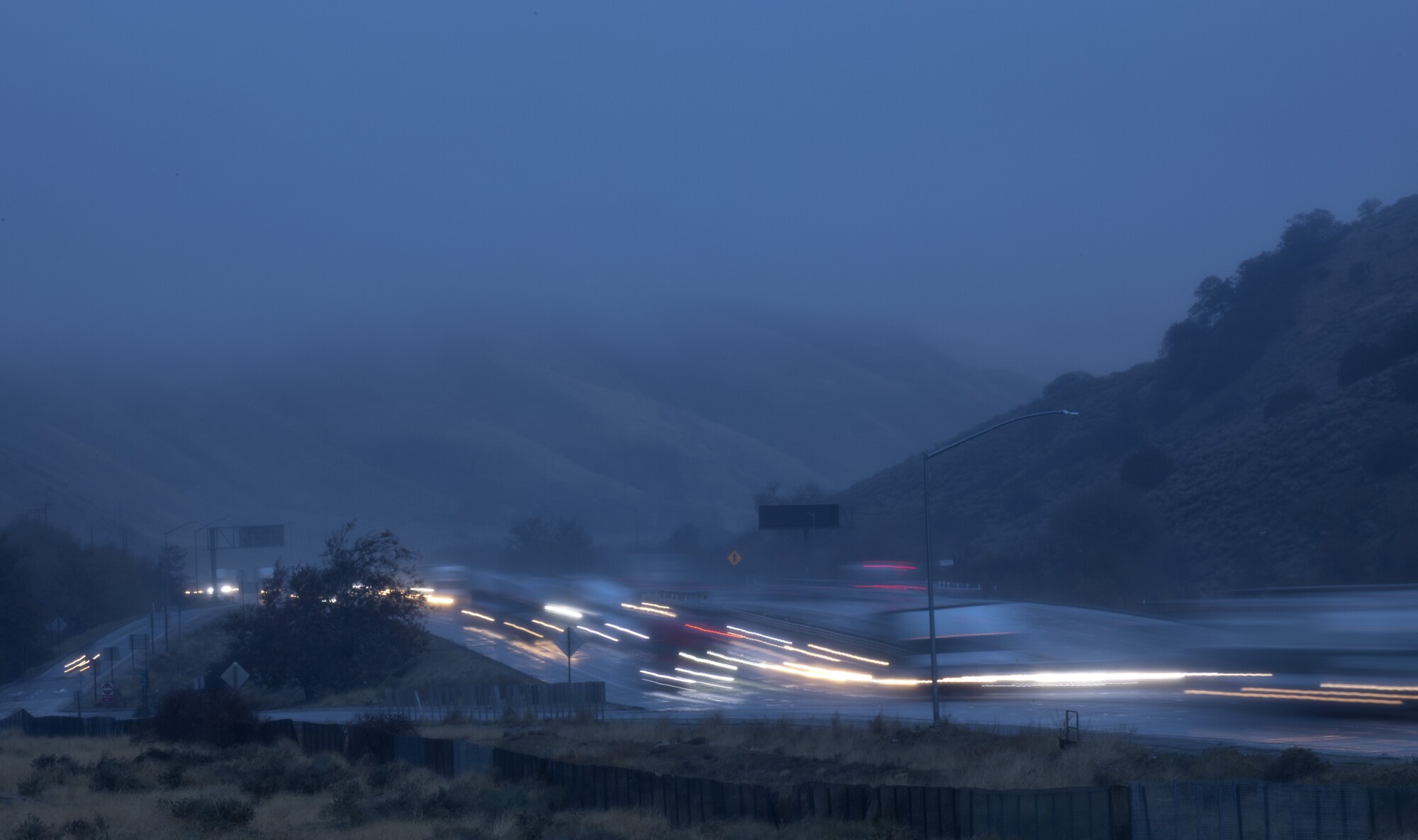 Traffic is flowing along damp Interstate 5 in Gorman on Wednesday as another storm hit southern California.