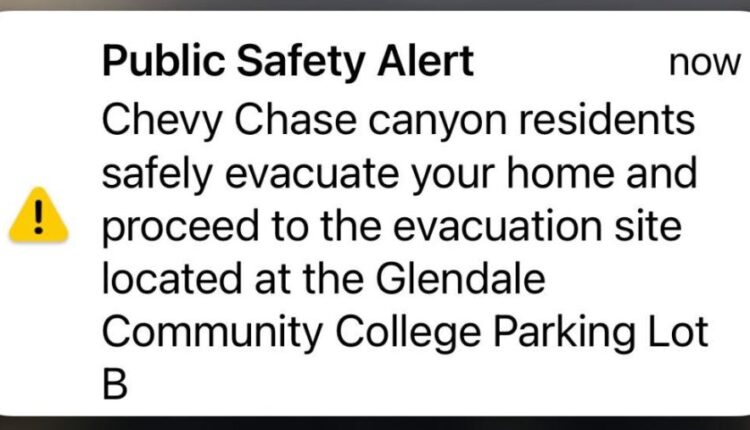 It was only a drill.

But possibly millions in Southern California got a blaring alert at about 9:10 am Saturday, May 14, on their smartphones with a message that looked like the real deal: It instructed residents in Chevy Chase Canyon, near Glendale, to evacuate immediately and head to an evacuation site in Glendale Community College’s Parking Lot B.

No mention with the alert, which sounded off like an Amber Alert, that it was but a drill.

“Glendale fire and police (agencies) planned for a fire drill exercise this morning,” Police Sgt. Shawn Milligan said. “It was mistakenly sent out not described as a drill, and we’re working to remedy.”

City officials said the alert was distributed throughout Los Angeles County because of a glitch in the messaging software, but it appears to have gone farther.

The blaring alert landed on phones in Long Beach, Downey, Temple City, the San Fernando Valley, San Pedro and even in Costa Mesa — and likely in many other communities as well.

Glendale city and fire officials had been working with the Chevy Chase Canyon Estates Association for months to prepare residents for the exercise, said Solene Manoukian, a city spokesperson. Residents in the canyon were told ahead of time about the exercise via mailers, traffic message boards and social media, and about 100 households ended up participating by going to the parking lot.

About 20 minutes before it took place, the city of Glendale sent out a tweet saying it was a drill.

But no further warnings were sent out.

Chevy Chase Canyon Residents, let’s prepare for an emergency together! Join us this Saturday May 14 @ 9 am! Watch this short video for additional details! @MyGlendale

THIS IS A DRILL: #MyGlendale is conducting an evacuation exercise in Chevy Chase Canyon.
For those who live in the Chevy Chase Canyon: Safely evacuate your home and proceed to the evacuation site located at the Glendale Community College Parking Lot B: https://t.co/zjTZ6CMN6E

By 9:30 am the city’s tweet already had received nearly 700 replies, almost all of them critical because of the lack of advanced notice and no mention in the alert of it being a drill.

The city and authorities had received an influx of calls regarding alert, Manoukian said.

“It would have been less upsetting to have woken up on fire than getting this text messages here in Pomona, great job,” one person tweeted to Glendale officials.

“Not good for the elderly, sick and others who might not check Twitter,” said another. “There should be mention of it being a drill on the phone alert.”

“Everyone was thinking Glendale is on fire,” said a third. “A lot of people aren’t on Twitter. You’ll want to sent (sic) another alert saying false alarm.”

Which, just after 9:30 am, did take place — with smartphones again sounding off with the new message.

How to Watch Los Angeles Angels vs Oakland Athletics: Streaming & TV | 5/14/2022 – How to Watch and Stream Major League & College Sports