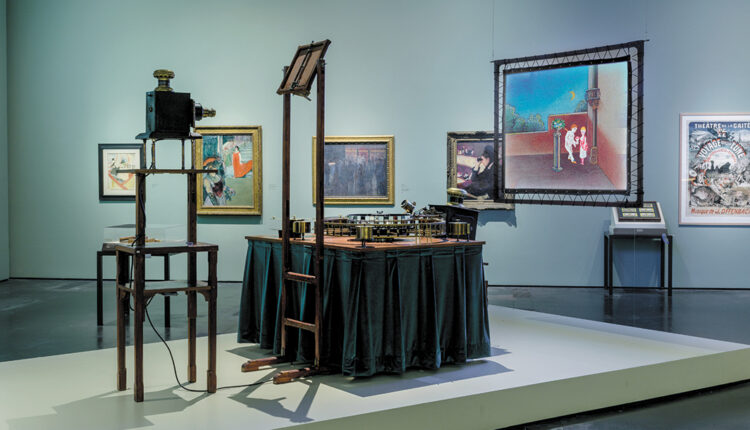 THE DEATH OF CINEMA has been announced almost as often as the death of God. And why not link film to religion? For true cineastes, basking in the reflected images of more stars than there are in heaven (as the old MGM tagline had it) supersedes any epiphanies in church. But in Hollywood these days, signs of decay, if not of mortality, are everywhere. On Sunset Boulevard, the iconic Cinerama Dome has been shuttered since the start of Covid, the Oscars have been shedding categories and viewers, and box-office receipts were trending down even before the virus. If there’s a home for the industry in the twenty-first century, it’s probably not Hollywood but Los Gatos, the sleepy Bay Area town streaming goliath Netflix calls home.

This, then, is precisely the moment to take stock of the medium, and the intersection of Wilshire Boulevard and Fairfax Avenue, just south of Hollywood proper, is a fitting location for such reflections. There, in a former department store brilliantly renovated by architect Renzo Piano, the Academy Museum of Motion Pictures has opened at last. The institution’s curatorial point of departure is collector Richard Balzer’s vast array of protocinematic optical toys, which set the scene for the rest of the museum’s concentration on narrative film—a choice that draws in not only cinephiles but also visitors who wouldn’t know a key light from a key chain.

LACMA’s show concerns the evolution of not only a new medium but also that new species of humanity, the fully modern spectator, the flaneur settling into a seat at the salle de cinéma.

Just next door is the Los Angeles County Museum of Art, and within its Resnick Pavilion, there’s a focused show about cinema’s origins that, in contrast to the Academy Museum’s foregrounding of story, emphasizes place and culture. “City of Cinema: Paris 1850–1907,” a version of which opened in the fall of 2021 at the Musée d’Orsay in Paris, is a meticulously researched deep dive into geolocative film history. The exhibition stages a panorama of Parisianness, its first gallery featuring a wall of swirling Folies Bergère posters and a re-creation of one of the city’s ubiquitous news kiosks. The structure is an object in the round, a surface on which to hang photographs, a screen for projections, even a perch for a stereographic viewer of urban scenes tracing the architectural, infrastructural, and topographical morphing of Paris during the second half of the nineteenth centuries. The other arts are well represented: In addition to a “Théâtre Optique” showing Émile Reynaud’s animated Around the Beach Cabin (1894) and a reconstruction of an early theater in which visitors can take in a brisk twenty-minute program of short films, there are generous selections of sculpture, prints, photographs, and paintings. With their visions of a transforming metropolis, two masterful works in the last category, Gustave Caillebotte’s On the Pont de L’Europe, 1876–77, and Camille Pissarro’s La Place du Théâtre Français, 1898, illuminate the exhibition’s theme, Caillebotte’s austere, almost monochromatic geometrizing of two men standing on an iron bridge looking out at the Gare Saint-Lazare contrasting with Pissarro’s colorful bird’s-eye view of one of the city’s premier spaces for spectacle. Yet both create distance from their human subjects, Caillebotte’s implicitly comparing them to machines, Pissarro’s to ants. These artists picture Paris in the throes of modernization, teeming with people subjugated to techno-logistics who are, as the show amply demonstrates, forming new, often mediated social bonds. When Napoleon III let Baron Haussmann loose on the still-medieval streets of Paris, I doubt either the emperor or his engineer imagined that their vast boulevards and unbroken urban vistas—from the Arc de Triomphe to the Louvre—were to become both the setting and the facilitator of new ways of making and seeing images. LACMA’s show concerns the evolution of not only a new medium but also that new species of humanity, the fully modern spectator, the flaneur settling into a seat at the salle de cinéma.

The exhibition focuses on cinema as an instrument of French colonialism, Western hegemony, and white supremacy, featuring multiple posters portraying the “primitivism” of other cultures and films, like Gaumont’s In China (1900) and Pathé’s Picturesque Japan (1907), that otherize via extreme exoticism. Here, the medium is proof of and justification for the mission civilisatrice, France’s euphemism for its brutal imperialism. This attention to film as a manifestation of ideology is powerful, but it is curious that the show so resists cinema’s sensuous appeal, its magic and glamour. Though just over the hill from the San Fernando Valley, the world capital of filmed pornography, LACMA here downplays sex, eschewing overtly risqué content, with the exception of Ferdinand Zecca’s Scenes from My Balcony (1901), wherein the male protagonist uses a telescope to watch a female neighbor disrobe. Aside from this voyeurism, the curators sidestep the scopophilia and polymorphous perversity that have been central to optical media’s allure since the first smutty French peep shows. This is not to say that delights do not abound at LACMA. There’s the diorama of the Camposanto in Pisa, 1834, painted by Charles-Marie Bouton with rear illumination that shifts the scene from day to night and back again. That this illusion was produced by then set designer Louis Daguerre serves as a reminder that nineteenth-century Paris was ablaze with experimentation in all manner of media. If that name sounds familiar, it’s because that young man would later invent methods of fixing photography on glass, igniting the mania for daguerreotypes that swept Paris and the rest of the world. Far less known is Eugène Danguy, inventor of a magic lantern called the Diaphorama; the wooden frame holding its multiple slides, ca. 1880s, has a handmade charm reminiscent of Joseph Cornell’s boxes, themselves often tributes to their creator’s cinematic obsessions. Media cross-pollination is on full display in a series of pieces inspired by the modern dancer Loïe Fuller. La Loïe, as she was known, fashioned herself into an embodiment of Art Nouveau and designed the intricate lighting that turned her movements into voluminous skirts into performances she termed “serpentine dances.” Around the corner from Jules Chéret’s 1893 chromolithograph for the Folies Bergère of La Loïe, LACMA has juxtaposed photographs, a decorative plate and a small bronze statue, a lamp, and a 1902 hand-tinted film by pioneering female director Alice Guy-Blaché, all depicting La Loïe and her imitators, demonstrating how Parisian artists captured motion in as many media as possible. Martin Scorsese speaks of the “master image,” a single frame that can summarize an entire film. LACMA’s show has more of a master subject, and that is without a doubt the Eiffel Tower, built for the 1889 World’s Fair that brought people from around the globe to Paris. Théophile Féau’s series of photographs of the tower under construction (1887–89) is both a precinematic artifact and a piece of evidence the curators have shrewdly marshaled to make a point about change and modernity. Visitors will also find Louis Aubert’s 1889 magic lantern in the form of the tower and a tiny pointillist oil on panel of the structure from that same year by Georges Seurat, representing yet another advancement in image production. Rather than either of the expected firsts—the Lumière brothers’ Arrival of a Train (1896) or Georges Méliès’s A Trip to the Moon (1902)—the salle de cinéma’s film program starts with the Lumières’ little-seen Panorama from the Ascension of the Eiffel Tower (1897–98). Even as the tower monumentalized innovations in the industrial production of iron, it was already relentlessly mediated and dematerialized. At the origins of cinema, we find vivid reminders that modernity was already postmodernity. In 1965, midway between the birth of cinema and our present moment, Jean-Luc Godard mined Paris in his epochal Alphaville, a pastiche of science fiction, gangster flick, and German Expressionism. He famously shot only in the newly constructed areas of Paris that looked to him like those parts of the future that had already arrived. What’s less well known is that the project started off as his attempt to adapt Richard Matheson’s classic 1954 dystopian sci-fi novel, I Am Legend. Godard never managed to secure the rights, but Hollywood producer Walter Seltzer did and hired Charlton Heston to star as the title character in his adaptation, The Omega Man (1971). The opening shots are haunting pans across a post-apocalyptic, trash-strewn downtown Los Angeles. Playing a virologist named Robert Neville, Heston drives the deserted streets in a red convertible, sporting aviator shades and carrying a machine gun. Neville’s LA is emptied of people, and he so longs for company that he goes into a theater, fires up a projector, and screens the 1970 documentary Woodstock. He grooves on the sheer mass of humanity on the big screen, nodding along to Arlo Guthrie singing “Coming into Los Angeles.” Prior to battling the ghostly white mutants infesting the city, Neville, as played by Heston—that icon of apocalypse whose other eschatological exploits include liberating humans on the planet of the apes and determining that Soylent Green is people—leaves the theater with the lament of every generation of movie lovers: “They don’t make them like that anymore.”

But of course they do keep making them, from the alpha of fin de siècle Paris to the omega of plague-ravaged Los Angeles. Even when streaming media funds what used to be called “movies” in order to feed the insatiable demand for what is now just “content,” the history of the art form and its urban origins tell us that cinema is resilient, that getting together in the dark to share experience, emotion, and spectacle still resonates with the deep power of social dreaming.

Peter Lunenfeld is the author of City at the Edge of Forever: Los Angeles Reimagined (Viking, 2020) and is vice chair of the department of design media arts at the University of California, Los Angeles.