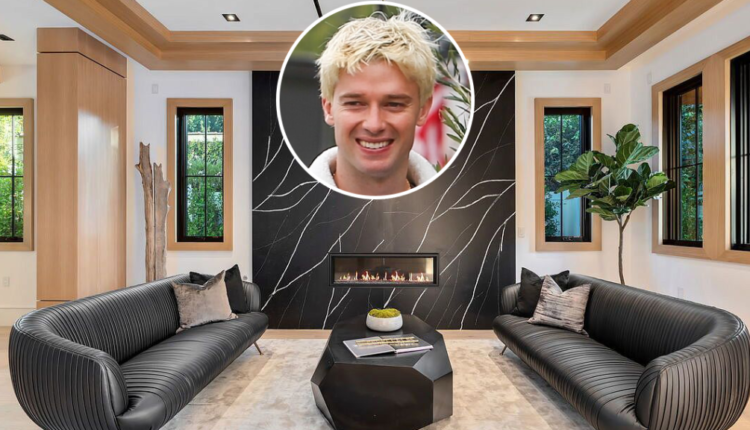 On the real estate front, it’s one and done for Patrick Schwarzenegger. Barely one year after he bought an all-new home near the border of West Hollywood and Los Angeles, the eldest son of Maria Shriver and California’s former Governator has sold the place in an off-market deal. The modern farmhouse-style abode went for exactly $5 million, or a notable $615,000 more than Schwarzenegger himself had paid, and records reveal the spendy buyer is plastic surgeon Jonathan Sykes.

Built on speculation by a developer, the luxe house has five bedrooms and 5.5 bathrooms in more than 5,000 square feet of living space. Located only one block away from the West Hollywood city limits, the property is technically located in the bustling Beverly Grove neighborhood, and it’s also only a two minute walk from ever-trendy Melrose Avenue and the many shops and dining destinations lining that street.

Of course, the wood-sided home is reminiscent of numerous newly-built “modern farmhouses” popping up all over LA — this architectural style is perhaps the biggest trend in luxury real estate right now, at least in Southern California — though the Schwarzenegger structure does differentiate itself from the pack with a nifty two-tone look, with the façade featuring both unpainted redwood and charcoal paint-doused slats.

Inside, there’s a narrow central hallway with unobstructed sightlines from the front door all the way to the backyard. To the immediate right of the entryway is a living room equipped with a statement floor-to-ceiling black quartz fireplace. Beyond that is an open dining room, a lavish wet bar with a glassy wine storage area, and a kitchen with a striking black-and-white quartz backsplash. An adjoining family room features giant Fleetwood glass sliding doors that “disappear,” allowing for a quintessentially SoCal indoor/outdoor lifestyle.

One of the home’s bedrooms is on the main floor, while the other four are located upstairs, and all are equipped with ensuite full bathrooms. The upstairs primary suite has another dramatic fireplace, spa-style bathroom and walk-in closet with bespoke cabinetry.

Also on the premises are an office and a movie theater. And while the 6,550-square-foot lot isn’t particularly spacious, it is nicely equipped with a saltwater plunge pool and inset spa, plus an outdoor BBQ center, tall privacy hedges and tiny patches of AstroTurf lawn.

No word yet about where Schwarzenegger is moving, but he’s not exactly homeless. The occasional actor and investment-advice-giver, 28, still owns a residential property in Santa Monica, which he bought in 2019 for $3 million. Back then, the roughly 7,500-square-foot lot was completely vacant, but Schwarzenegger is hard at work building a new house on the premises that — last we checked — is still under construction.