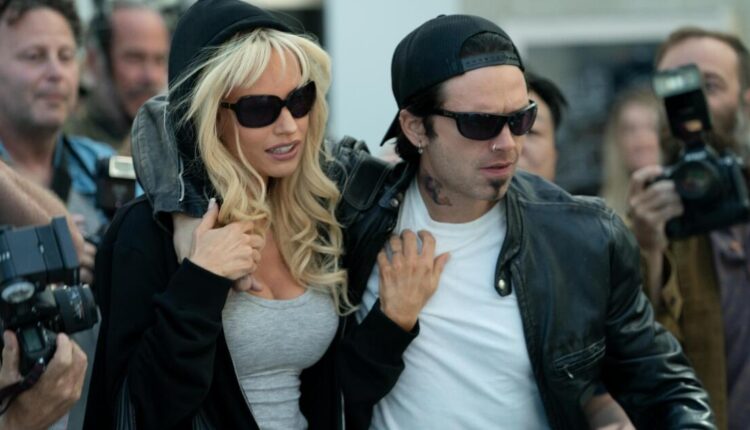 Every subsequent tale of a star born from the tabloid whirlwind around a sex tape (see also: Kim Kardashian, Paris Hilton) traces its roots back to the story of former Playmate and “Baywatch” star Pamela Anderson (Lily James) and Mötley Crüe drummer Tommy Lee (Sebastian Stan), turned here into a stupidly entertaining trip down memory lane. In this eight-part series directed by Craig Gillespie (“I, Tonya”), the 1990s’ queen and king of excess scramble to cope with the pressure and keep up with changing times as their intimate home video becomes the World Wide Web’s first viral celebrity sex romp.

The story starts in 1995, when construction worker Rand Gauthier (Seth Rogen, who developed the series with regular collaborator Evan Goldberg) is stiffed by Lee over work done at the couple’s Malibu mansion. Seeking payback, Gauthier breaks into the garage and steals a safe. Its contents make history when Gauthier figures out an ingenious new way to sell the recording without getting a release from Lee and Anderson: He sets up a shop online, selling the video for $59.99.

Lily James as Pamela Anderson on the set of “Baywatch” in “Pam & Tommy.”

Tastes were also evolving and “Pam & Tommy” has plenty of fun with the generational changing of the guard, when the 1980s bleach-blond-babe look and LA’s big-hair metal was usurped by deadpan “Daria” and scrappy Seattle grunge rock. When Mötley Crüe shows up to the studio to record, they naturally go to the big room, Studio A, but it’s already taken. There must be a mistake! Leather-clad Lee demands to know who the guys in the recording booth are: Who the f— is Third Eye Blind? The Crüe looks crushed and utterly confused. The future has arrived and now dorks rule.

The ’90s soundtrack is another draw here, and like Showtime’s “Yellowjackets,” it signals that there’s an appetite for music from a decade that produced the far-flung likes of Pearl Jam and the Fugees. Though Anderson and Lee are metal fans, the series ironically uses styles and songs from the Clinton years that marked the death knell for Sunset Strip rock: Primal Scream, Fatboy Slim, Alanis Morissette.

Other mementos from the era include mentions of LA hot spots like the Viper Room, the national obsession with Tickle Me Elmo and the power of “Tonight Show” host Jay Leno to shape public opinion before Jon Stewart’s “The Daily Show,” TiVo and on demand changed the game.

Goofy as “Pam & Tommy” can be — and despite its periodic struggles to add a #MeToo frame to the sex tape story — it’s still clever enough to be a worthwhile escape. Sure, Tommy’s penis talks to him and Anderson thinks her love affair with the motley fool is straight out of “The King and I,” but it’s nostalgic fun to watch this collection of outlandish, warped and helium-headed LA characters stumble into the future .