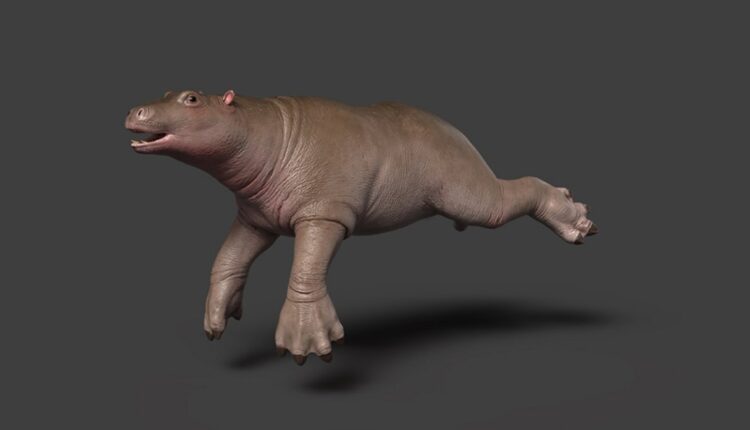 The animal world we live alongside comprises an important part of our city’s heart, from the mountain lions that roam our hills, to the coyotes that howl in the canyons, to the hawks that circle over the freeways.

And remembering exactly where we saw a cool critter? That’s easy: the moment comes back to us whenever we revisit a particular park, or corner, or street.

But what if, rather than recalling where we saw a coyote, we’d spied a walrus in Griffith Park, or a whale in Lincoln Heights, or a shark swimming down Wilshire Boulevard?

Sizable swaths of Los Angeles were once fully submerged, and much like the ocean waters we know today, amazing and often enormous critters could be found beneath the waves.

But unlike today’s ocean denizens, the old sea that once lapped across much of our city was home to an astounding and sometimes eye-popping array of ancient animals, including Pontolis barroni, a giant walrus.

“LA Underwater: The Prehistoric Sea Beneath Us” will explore that world through fossils, colorful renderings, dramatic wall projections, maps, and contemporary stories of discovery.

“The exhibition features nearly 40 fossils and specimens showing the Los Angeles region’s vast pre-history, including an ammonoid fossil that dates from nearly 75 million years ago; the 13–15 million-year-old Coursen’s Strange Seal; a 10–50,000- year-old saber-toothed cat skull; and a shell discovered in modern LA soil,” shares the Natural History Museum of Los Angeles County, where the show will debut on May 2, 2022.

Learning where some of these fossils have been found is part of their fascinating journey to the museum.

Many important fossils were unearthed during Metro-related construction projects, and a whale skull dating back 10 million years? Plumber FW Malley found the astounding specimen in Lincoln Heights while digging an irrigation ditch.

Prehistoric plankton will serve as some of the main players in the exhibition. Curators will show how these minuscule creatures “… transformed into the oil” under our city, “creating a legacy of fossil fuels that has contributed to the city’s overall growth and wealth.”

And adding an exciting element of connection?

An interactive map will give guests the chance to know what fossils have been discovered in or near their own neighborhoods, should they want to keep an extra keen eye upon returning home. (Or, yes, just have some cool local facts to share with friends.)

Perhaps the next time you hear an owl hooting in a nearby tree or spy a skunk scurrying around a corner, you may also think to the walruses and sharks that lived in your immediate area, too, only millions of years ago.

“LA Underwater: The Prehistoric Sea Beneath Us” is included with your Natural History Museum admission.

Pictured: An ancient aquatic mammal in the Paleoparadoxia grouping

Who Drives the Food Delivery Bot When Something Goes Wrong?