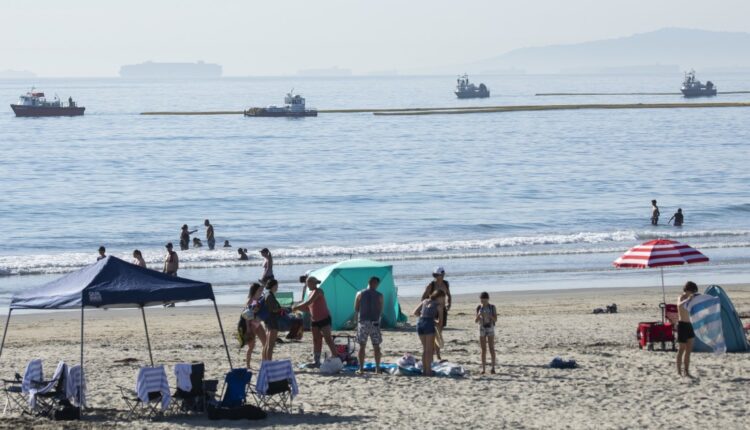 Throughout Sunday afternoon, people gathered at the mouth of the Santa Ana River between Newport Beach and Huntington Beach after at least 126,000 gallons of crude oil spilled into Orange County’s coastal waters. A sandbar blocked the ocean and prevented the oil from entering the river, where birds would tumble down to catch fish.

Some people walked barefoot along Newport Beach, around lumps of oil.

Mike Ruby, a Manhattan Beach resident, paddled on a surfboard that was occasionally lifted by gentle waves. As the water rose, dark lumps of oil were visible before falling again.

Ruby had seen the signs on the sand saying, “The water is closed because of the oil spill,” and had refrained from going into the sea for about 30 minutes. But the desire to get wet has prevailed.

“It’s not that bad out there. There’s a light film of oil on the water, ”he said. “But I don’t see too many chunks.”

He was more concerned about the wildlife, adding that he could taste the oil that mixed with the salt water while surfing. He didn’t notice the black oil stains on his chest and back until a reporter pointed it out.

Even so, he said, “It felt great getting wet, the sun and everything.”

Ron Schwalbe, who lives on the Balboa Peninsula, walked the sand, dodging oil while taking photos. He had smelled the spill Saturday night and said it was even stronger on Sunday morning.

The 61-year-old checked the birds that were walking along the edge of the ocean and warned passers-by to watch their steps. He checked the surf report that warned of the oil spill and said not to go in the water.

“I’m not surprised and I’m not shocked or anything. It’s just strange that something like that happens in this day and age, ”he said. “With all the technology we have, why couldn’t they prevent it? It seems very strange to me. “

“Make sure your pets don’t get oil on their paws,” said a lifeguard from his red truck and turned to the people sitting on the sand. “It’s not a good idea to have them in this area.”

The spill, which was first reported on Saturday, came from a pipeline off the coast of Huntington Beach that was connected to an offshore oil rig called Elly. The outage caused a slick that stretched about 8,320 acres – larger than the city of Santa Monica – and sent oil to the shores of Newport Beach and Huntington Beach early Sunday.

Oil from the oil spill also infiltrated Talbert Marsh, a 25-acre ecological reserve in Huntington Beach that is home to dozens of species of birds.

Viet Pham, concerned about the added stress for first responders and workers caring for the wildlife, immediately offered to feed them free at his family restaurant, Good Vibes, a plant-based restaurant along Main Street in Huntington Beach. The restaurant is giving away its soul bowl filled with rice and vegetables to anyone who comes by “who needs food or just a thank you for being there,” he said. “At times like these, I think we’re in the same boat when we come together to serve our community – be it by eating or cleaning up or [rescuing] some creatures. “

Pham, based in Huntington Beach for about 20 years, is part of an Asian volunteer team that has delivered more than 80,000 restaurant meals to healthcare professionals, key workers and seniors since the beginning of the COVID-19 pandemic.

“A disaster can shut down a lot of stores, but now is not the time to worry about it,” he said. “We have to focus on strength and mental strength so that people can do fast work.”

Hal Lopez came to Huntington Beach from the Bay Area to see the Pacific Airshow and stay with relatives. The last day of the event was canceled due to the overflow.

On Sunday he stood near Magnolia Marsh, along the Pacific Coast Highway and Magnolia Street. A crane wore black spots on its normally pristine white feathers. Lopez shook his head.