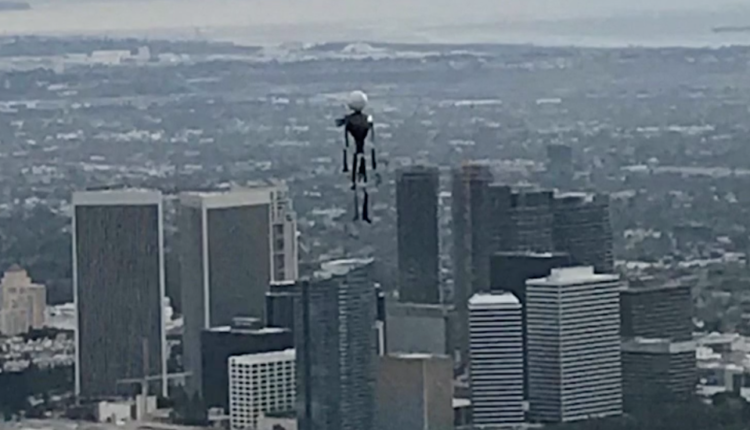 But large groups of loose balloons can be dangerous for flights, he said.

And Mr. Young said that the number of objects and potential dangers in the air – drones, balloons, laser pointers pointing at the sky – is increasing every year. Many of them are reported from small planes or commercial flights every day, he said, but the size of the reported jetpack user makes it a “fairly rare” security risk.

Pilots first reported a suspicious sighting in August 2020, describing a man flying a jetpack approximately 3,000 feet near Los Angeles International Airport. “Tower, American 1997 – we just passed a guy in a jetpack,” the American Airlines Flight 1997 pilot from Philadelphia told air traffic control at the time, saying it looked like someone was about 300 meters to the left of the plane .

The sighting opened an investigation by the FBI and the FAA. Authorities then heard of a second sighting about six weeks later when crew members of an airliner flying near the airport reported seeing what looked like a person at an estimated 6,000 feet altitude. In July of that year, a third sighting at 5,000 feet was reported by a pilot flying a Boeing 747 over Los Angeles.

“A possible jetpack man in sight,” said the pilot at the time. After air traffic controllers and pilots discussed the sighting, one pilot simply said, “We’re looking for Iron Man.”

An FBI spokeswoman said at the time of the third sighting that the office is working with the FAA to investigate but that it has not been able to confirm any of the previous sightings.

While the jetpack sightings have attracted a great deal of attention, they have also generated skepticism from companies that manufacture jetpacks.

Most jetpacks lack the fuel efficiency to fly for more than a few minutes, making it difficult for them to get very high. And flying in a crowded airspace, such as around a large airport, could be extremely dangerous for a jetpack user who could risk a collision with a jet or be pulled into an airplane’s engine.