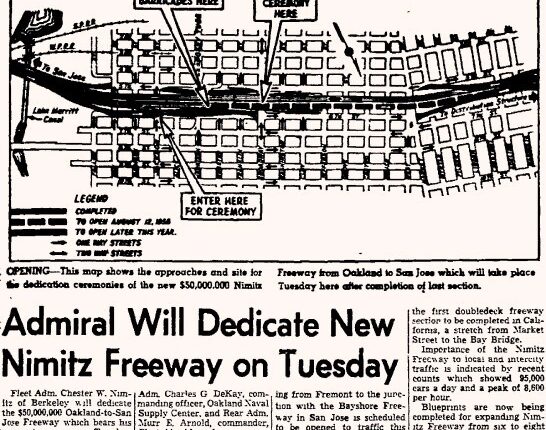 Q: I spent many years in the LA area, living in Fullerton, Pasadena, Los Angeles, Santa Monica, and Venice before moving to the Bay Area

Perhaps the use of “the” in front of the highway number dates back to when we all called the highways and highways by name before they were assigned numbers. When I drove to UCLA from my childhood home in Pasadena, my route was the Arroyo Seco Parkway to the Pasadena Freeway to the Harbor Freeway to the Santa Monica Freeway. The names of the highways were descriptive of the cities passed through and were much more meaningful than naming a number.

A: I need Dennis the Roadshow Editor to interfere.

Q: Last week we had a story about the Santa Clara Attorney’s Office offering a $ 20,000 reward for arresting the person who shot ball bearings on cars and buildings along the Guadalupe Freeway. Another editor asked, “What is the Guadalupe Freeway?” I replied: “Highway 87”.

I noticed that people here used to refer to the highways by their non-numeric names: Nimitz, Sinclair, Bayshore, Guadalupe. But people don’t seem to use them that much these days.

A: No, except for the Nimitz (880). In SoCal, routes were named when they opened, and the names corresponded to the end of the freeway or the places they passed – like the Arroyo Seco Parkway or the Hollywood Freeway. Routes were also assigned numbers, but it wasn’t uncommon for highways in the LA area to have more than one route number. The Pasadena Freeway was Route 6, 66, and 99 at times.

In 1964 the numbering system of the freeways was streamlined so that each freeway only had one number. Newer highways, such as the 605 Freeway, were built at the time, making it easier to call the highway at its only easy-to-remember number.

Q: People in LA still refer to the freeway names, but they are used interchangeably with the route number. There is a realization that not everyone is from here who drives here. I’m still referring to the route number without “the ‘” in front of it. I can’t take the Nor Cal away from the girl.

Join Gary Richards for a one-hour chat on Wednesday lunchtime at www.mercurynews.com/live-chats. Search for Gary Richards at Facebook.com/mr.roadshow or contact him at [email protected] or 408-920-5335.

Gas outbreak near Los Angeles leads to settlement of up to $ 1.8 billion