NOT ALL SOPRANOS ARE GANGSTER 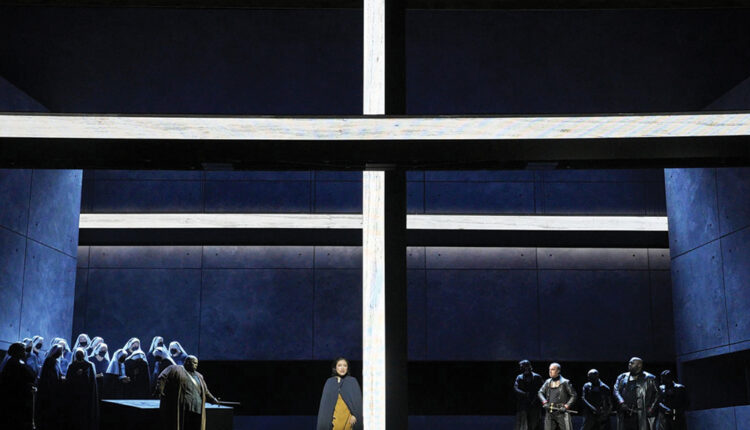 LA OPERA presents VERDIS “IL TROVATORE” – finally I saw, heard, I loved it and I HAVE to HIGHLY RECOMMEND it, but this is the last performance! Do yourself a favor. Take the chance even if you think opera is not your thing. Trust me it is! And this one is a home run from the park. If you don’t want to take advantage of something like that, you might as well head back to Omaha, Cheyenne, Natchez, or Albuquerque. (However, in NM you can head to the famous Santa Fe Opera in a spectacular outdoor setting.)

The new season, which has been postponed for a long time, is booked by Verdi and ends with “Aida” next May. LAO Music Director (since 2006) James Conlon lives and breathes the Italian master who conducted his 500th Verdi opera last year. It shows: the orchestra was as lively, dramatic, rich and expressive as I’ve ever heard it. The entire company had to deal with pandemic restrictions and then had to rebuild the set from scratch in 10 days because the one they had shipped from Europe was still anchored off the coast of a crowded LA port.

But that’s showbiz, and sometimes adversity turns into triumph. The cast, which was happily represented at the curtain by director Francisco Negrin, seemed totally enthusiastic to finally be able to perform again, and the audience showed love and respect for a long time. All in all, this can be one that you will never forget.

It’s a ghost story! The fantastic, dark, dramatically lit moving set reflects it perfectly. The acting was thrilling, the singing was great and the choirs, the choirs! The famous “Anvil Chorus” is short and came up early, but it was just one of many jewels. (Congratulations to Grant Gershon.) The two main characters were the unforgettable, great Chinese soprano Guanqun Yu and the Missouri dramatic tenor Limmie Pulliam, along with the sonorous Texas mezzo Raehann Bryce-Davis. Knock yourself out! Sun 2 p.m., Dorothy Chandler Pavilion, DTLA, $ ​​23-292.

BLUES DUO – that’s not their name, I guess they don’t have one (everyone plays in other bands too), but you shouldn’t mind that because this slide guitar harmonica vocal duo are ice cold blues masters in every way. with as full a sound as one could wish for, and isn’t that enough? You are the real deal. What a great way to end the week. Free parking next to Ashland Hill Restaurant on Main Street every Sun 3pm – 5pm.

EM THE MASTER – why would you make people skeptical before they even come to the door by calling yourself “The Master”? Maybe it will be worth it knowing you can secure it and that will become part of the picture, the legend. It’s a showbiz / rock’n’roll tradition, but only tried by the self-confident.

EM supports and does everything, like no one you’ve seen in years or maybe ever, up-close at a local blues bar, not an arena, for $ 10. She sings, she dances, she has dancers, they all jump on the bar (check out those drinks!) And practically spill the show out the door onto Fourth Street. She crawls across the stage and across the floor like a reptile, reaching for the microphone and not missing a musical beat, she doesn’t play the piano, she attacks, she uses her voice as an instrument in creative ways to transform every number. She aggressively leads a killer band, her energy is uninterrupted and seemingly limitless, she can sell a song, rocker and ballads, vocally and with her smart, seductive arrangements. She writes great songs that fit her act perfectly, and she may remind you of a more energetic Lady Gaga. In her spare time, she co-wrote a book with Gaga that made it onto the NY Times bestseller list. Either I’m lying, or I’m crazy, or you’re crazy because you don’t get that feeling while she’s here. Every Tuesday 9:30 p.m., Harvelle’s, DTSM, $ 10.

A note on Harvelles: I just noticed that the acclaimed blues duo played Harvelles in 2019. You know, when the world was still on its axis. Not surprised. Jason books this venerable 90 year old club so superbly, a really amazing variety with something for everyone, but always at a really high level for such a small venue, in collaboration with the longtime owner Cevin, and Damian occasionally intervenes with it too while you make sure the whole process goes smoothly. Even the bouncers are cool. It’s your ideal friendly local dive. Damian and Jason ended up here after their popular Liquid Kitty bar sold out among them, are now co-owners of Cevin and it’s a team effort that makes us one of the best venues in town right in the middle of our downtown area.

THEATRICUM BOTANICUM presents “THE LAST, BEST SMALL TOWN” – this moving, contemporary original with the themes of racism, small town life, youthful rebellion, tradition – takes place in a small town that both nourishes and dumbs down. Great acting, but that could be said about everything TB does. This is a world class company. Sat 4 p.m.

SHAKESPEARES “JULIUS CAESAR” – historically informative, makes ancient political drama appear contemporary. All politics are local politics, right? Every word shimmers through the performance and play of the TB thespians. Christopher W. Jones stood out as the contradicting villain Brutus, as did Willow Geer as Portia, with particular linguistic laurels for Melora Marshall as Cassius, who was created for this role, despite being a male role. It pulls you right into the moment. Sun 7:30 p.m.

LIBRARY GIRL 12TH ANNIVERSARY SHOW – “Be Still And Know You Are, A Tribute to Stephen John Kalinich” and Happy Birthday, young poetry lady, that’s a long time to have some of LA’s best spoken words (and music) a month later present month, and it looks like you got through the pandemic, although a couple of scheduled performers pulled out at the last minute because they had concerns about performing indoors, but anyway we’ll always find plenty in your line-up, to provoke thoughts into hibernation or a smile on an unruly face, Sun 6pm for famous Gorditos and 7pm show, Ruskin Group Theater, SM Airport, $ 15.