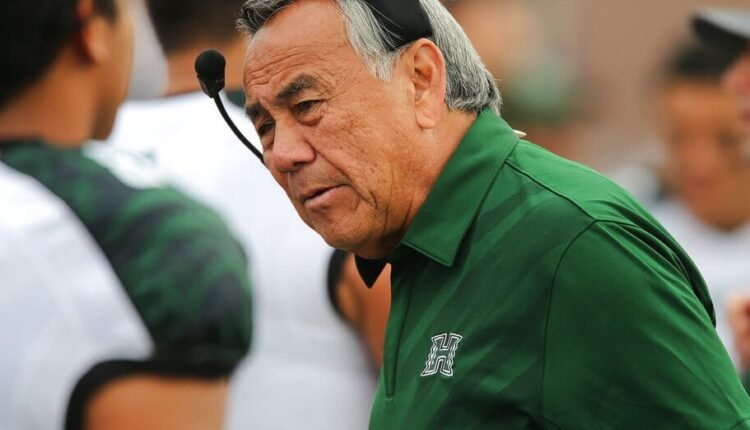 SANTA MONICA, CA — A former UCLA football player who sued the UC Regents and the NCAA for injuries he says he suffered while playing for the Bruins was singled out for punishment by an assistant coach, former Bruin offensive coordinator Norm Chow says in a sworn declaration .

John Lopez played offensive tackle for the Bruins from 2013-16. On Wednesday, Santa Monica Superior Court Judge Mark Epstein is scheduled to hear a motion by NCAA attorneys to dismiss the organization as a defendant in the suit. Lopez says he suffered at least three concussions while at UCLA, two of which occurred during practices and the third off the field, when he suddenly became unconscious in his student apartment.

The 75-year-old Chow gave a declaration in support of Lopez’s opposition to the dismissal motion. Chow said that before writing his statement, he reviewed the deposition transcripts of Lopez, former UCLA head coach Jim Mora — named to the same position at the University of Connecticut in November — athletic trainer Anthony Venute and former Bruin Zachary Bateman. He said he also reviewed the declarations of three other ex-UCLA players: Poasi Moala, Ben Wysocki and Greg Capella.

“I have concluded with a reasonable degree of probability and reasonable certainty that Mr. Lopez was subject to conduct by (then-UCLA offensive line coach Adrian) Klemm that increased the risk of injury to him and that Coach Klemm’s actions were below the standard of care a coach owes a student-athlete,” Chow says.

Klemm “demeaned and ridiculed multiple players and in particular, repeatedly verbally abused and demeaned Mr. Lopez,” according to Chow, who also says he believes Lopez was targeted by Klemm and ordered to repeat drills in order to punish the plaintiff.

“It is appropriate for a coach to repeat drills when a player is not executing properly, but when Coach Klemm singled out Mr. Lopez from the offensive line and made him repeatedly and excessively run drills to simply punish him, it no longer has educational or instructional merit,” Chow says.

Klemm directed other players to “repeatedly and rapidly” hit Lopez, subjecting him to repeated helmet-to-helmet contact, sometimes with blocking bags and other times during drills run at full speed with full contact, according to Chow.

Klemm also “verbally abused players when they showed signs of injury or told the coaches they were injured,” according to Chow.

Attempts to reach Klemm’s attorney for a response to the allegations were not immediately successful.

Klemm, an offensive tackle, was drafted by the New England Patriots in the second round of the 2000 NFL Draft, the same draft in which the team picked Tom Brady in the sixth round. Klemm, now 44, is currently an associate head coach for the University of Oregon.

In his own sworn declaration, the 27-year-old Lopez says the pressure to play while injured was indoctrinated in UCLA players by the coaches and that he has not healed from his time playing football.

“Due to my mental and physical disabilities resulting from the injuries I suffered while playing football for UCLA, I have been unable to return to school to obtain my college degree and I have not been able to work even a part-time job since leaving school ,” Lopez says.

A UCLA representative issued a statement in 2019 regarding the lawsuits.

“While we cannot comment on the specific details of a pending lawsuit, we want to make it clear that the health and safety of our student-athletes is UCLA’s top priority,” the statement read. “We strongly deny and will defend ourselves against the allegations made in the lawsuit. We handle every injury with the highest standard of care. Our team physicians and sports medicine staff work hand-in-hand on diagnosis, monitoring and treatment, and they are the only individuals who determine when a student-athlete is cleared to participate in their sport; coaches are not involved in these decisions.”

In their court papers, NCAA attorneys stated the organization did not owe a “legally-cognizable duty” to Lopez, had “no direct oversight or control over student-athletes” and that Lopez “sustained head injuries while in college that were unrelated to his football participation.”