Nicholas Goldberg: Airports to Passengers: Do it yourself 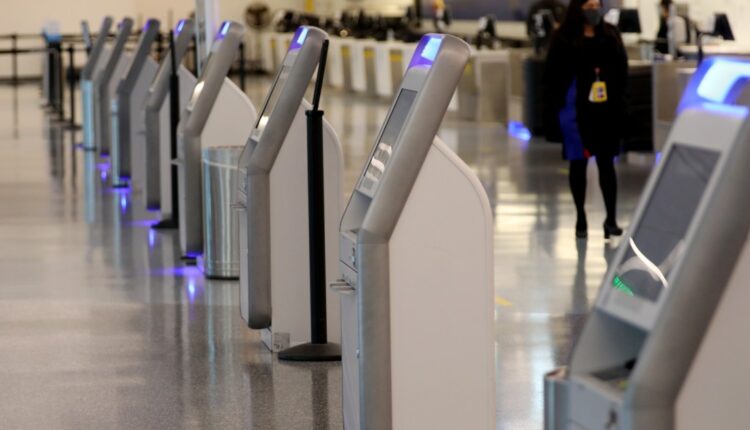 Since the beginning of the industrial revolution, workers have been losing their jobs on machines in the name of productivity and efficiency.

But the pace of automation, 200 years later, is really extraordinary.

I was reminded of this last week when I was on my first trip abroad since the beginning of the pandemic.

For the first time, I didn’t see anyone help me when I arrived at Los Angeles International Airport and checked in at a self-service kiosk for my flight. In the past, there was always someone there to assist the technically incompetent.

It was the first time I didn’t give my boarding pass to anyone when I got on the plane. I just scanned it and went through an automatic turnstile with no one around to check on me.

When I returned home from Frankfurt, I printed my own luggage tags on a machine and then heaved my bag onto an unmanned conveyor belt myself, where it was safety-checked and sent on its way by a machine and not by a person. The industry calls this a “self-service bag drop solution”.

I’m not sure, but from what I’ve read, it is possible that my suitcase was transported to the plane by robots at both airports rather than workers. (Will this help reduce the number of delayed, damaged, or lost bags per year – 24.8 billion of them in 2018?)

When I got back through passport control at LAX, I stopped at another self-service kiosk. The machine took a photo of me, identified me based on the picture and gave me an OK to enter. The identification was done by “biometric face comparison technology” and included no fingerprints, no passports, no questions. I ended up handing a piece of paper to a man who was barely looking at it and just said, “Welcome home”.

(U.S. Customs and Border Protection says machine identification cuts the turnaround time of a typical Global Entry passenger by nearly 90%, from 45 seconds to less than 6 seconds. That means I’ve gained 39 extra seconds to avoid the agonizing To make up for 20 minutes or more of crawling traffic to exit LAX and get onto the city streets.)

I should probably have been bothered by the sci-fi creepiness of face recognition. Or vice versa, I could have been amazed by the technological wonder of it all. Instead, I was impressed with how redundant human workers are in the process.

Outside the terminal, passengers called Ubers without the help of taxi dispatchers and were then met by cars that we all know will soon be driving themselves. There is also a shortage of workers in parking garages, with ticket machines, free-standing cash registers and automatic barriers.

How long will it take for pilots to be replaced by robots that fly planes more safely?

This is the world we live in. There is nothing new or inherently wrong with it. The revolution in computing, robotics and artificial intelligence offers extraordinary advantages that only fools would reject out of hand. But while automation is clearly good for businesses, and presumably good for consumers, how about bag handlers?

LAX officials insist that these automation changes, in most cases, don’t mean fewer jobs, often because they create new ones. But for travelers, “do the work yourself” is the new mantra. The new technologies mean that “passengers do most of the management themselves,” as one industry consultancy put it, and reduce the need for paid people in many traditional roles.

The country and the world are clearly heading for an extraordinary wave of robotization and automation – and not just in the travel sector. In February, the McKinsey Global Institute predicted that 45 million U.S. workers would lose their jobs to automation by 2030. The pandemic has accelerated transformation, the report said.

McKinsey had previously concluded that theoretically up to half of the jobs people do in the world could be automated – including not only low-paid, relatively unskilled jobs, but also many highly skilled office jobs.

The optimistic view is as follows: History shows that advances in technology save time and money, improve safety and efficiency, and benefit customers – while at the same time spurring growth and creating more, new, and often better jobs. There are short-term evictions; some jobs have been lost forever. However, economists say the losses have offset over time.

For example, a 2020 report by the MIT Task Force on the Future of Work found that 60% of all jobs in 2018 had not yet been invented in 1940. There used to be blacksmiths whose jobs were obviously obsolete with technology, but on the other hand there were no TV repairers or solar panel installers – or, for that matter, airline pilots.

However, some fear that the disruption caused by automation will be more intense and disruptive this time around.

McKinsey concluded that while the total number of jobs will increase rather than decrease, it does not necessarily protect low-skilled workers. Rather, difficult, challenging transitions will be required.

The MIT report found that the United States – unlike Sweden, Germany and Canada, among others – has not mitigated the impact of technological change on workers. The unions have become weak, leaving workers less able to protect themselves. The country has failed to make up for job losses and has underfunded retraining programs. Other countries have more robust social safety nets.

MIT concluded that it is necessary to reap “the dividends” from automation in order to provide workers with opportunities and economic security in the form of broadly shared profits.

That seems obvious, but so is the kind of thing companies and policy makers may overlook in their rush to upgrade.

Ask the baggage handlers if they are concerned if you find any.