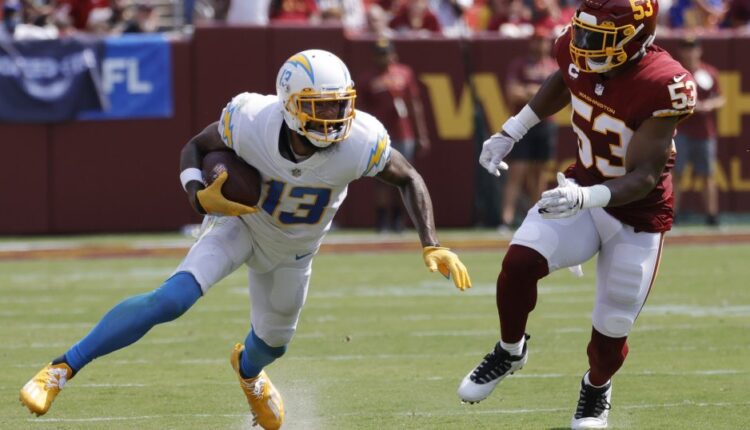 The Los Angeles Chargers and Justin Herbert finished their first week contest on a beautiful 15-game, 82-yard drive, securing a 20-16 win over the Washington Football team.

In a game with a lot of defensive talent, Joey Bosa stood out from the rest. He lived up to his reputation as one of the best pass rushers in the league and regularly won his matchup with rookie tackle Samuel Cosmi.

Justin Herbert’s day lacked the big games we got used to during his rookie season, but he had plenty of mid-range hits – 10-19 yards downfield.

Herbert was also excellent on the third down and completed 13 of 16 passes for 160 yards and a touchdown in such situations.

There have been some doubts about Austin Ekeler’s availability this week, but he took the lion’s share of the snaps against Washington. He saw 15 carry-ons, 42 snaps.

In the passing game, however, Ekeler was clearly missing. It was not targeted on any of its 25 routes.

Herbert distributed the ball in the passing game. Each of Keenan Allen, Mike Williams, Jared Cook, and Jalen Guyton received five or more goals in the game. Allen and Williams led the way with 13 and 12 respectively.

Guyton was the clear WR3 ahead of rookie Josh Palmer. He ran 33 routes compared to just eight for Palmer.

The offensive line held up pretty well against one of the best defensive lines in the NFL in this test. Herbert has only been under pressure on five of his 49 dropbacks in the game pending review.

Rashawn Slater was credited with clean pass protection on his NFL debut, according to PFF’s initial analysis. He allowed zero pressure on 46 pass-blocking snapshots.

Joey Bosa made his way into the backcourt regularly in this game. According to PFF’s analysis of the first half, he only got four pressure points but counted another four wins without pressure.

Kenneth Murray and Kyzir White were the only linebackers to see significant action in the game for Los Angeles. White forced a big fumble to set up a Chargers touchdown – one of five tackles for him in the game.

Durwin James was active in the defense of Brandon Staley on his debut. He finished the game with seven tackles and a pass breakup, which could have been an interception, and positioned himself in the slot on 18 of his 49 defensive snaps.

Los Angeles secondary school allowed only 102 passing yards over the course of the game.

Ryan Fitzpatrick threw eight dropbacks just 13 yards before leaving the game with an injury. According to PFF’s initial analysis, he was pressured on five of these setbacks.

Taylor Heinicke had a little more success late, completing three out of five passes thrown 10 yards or more and 11 out of 15 passes total.

Antonio Gibson saw almost all of the rushing work, and although he shared the action with JD McKissic in the passing game, Gibson was the only one who saw a goal.

Even though his fumble prepared the game-winning touchdown for Los Angeles, Gibson saw good use, which is encouraging from a fantasy football perspective.

Dyami Brown replaced the injured Curtis Samuel at the outside wide receiver for Washington. He ran the second most distances outside the team (12), behind only Terry McLaurin (17).

Brown and McLaurin also cited all wide receivers and tight ends with four targets each.

Rookie tackle Samuel Cosmi played one of the toughest pass protection matches in the league against Joey Bosa, and Bosa prevailed. Cosmi is likely to be Washington’s lowest-ranked offensive lineman in pass protection after the grades are completed.

Jonathan Allen and Montez Sweat both posted sacks, but it was an overall quiet night for Washington’s starred line of defense. Nobody finished the game with more than two pressure attempts, despite Herbert falling back for pass 48 times pending verification.

Cole Holcomb (64 snaps) and Jon Bostic (51 snaps) both overtook first-round rookie Jamin Davis (36 snaps). Holcomb recorded a total of 10 tackles without a miss in the game.

By comparison, the free agent acquisition William Jackson III was charged with only four passing yards in its coverage, and he got away with an interception and a pass breakup.