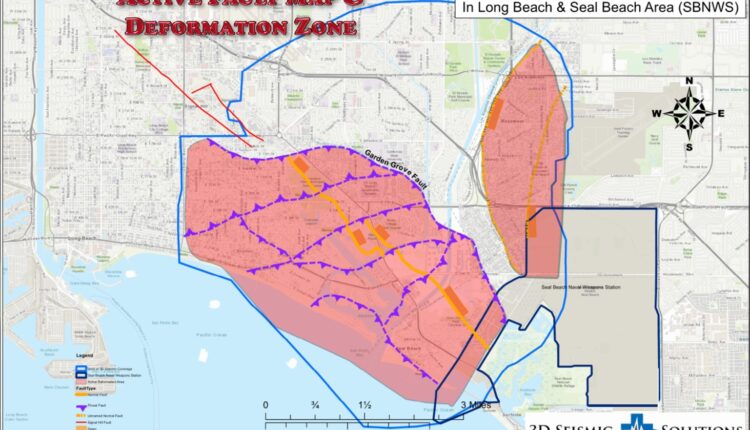 A recent high-density seismic survey highlighted a previously unmapped fault and highlighted the challenge of determining the earthquake hazard in the Los Angeles Basin.

The Los Angeles Basin is home to innumerable faults that range from thousands of feet to hundreds of miles in length. These include normal faults, reverse faults, shear faults and strike-slip faults. The Newport-Inglewood Fault Zone (NIFZ) – a series of faults stretching between Newport and Inglewood, California – is a major source of seismicity in the area. Many experts believed this zone has been linked to several notable earthquakes, particularly in the Long Beach-Seal Beach area, including the 1933 earthquake with a magnitude of 6.4 in Long Beach.

Less well known are the basin’s numerous shallow faults, some of which were recently identified in the immediate vicinity of Seal Beach. Scientists at 3D Seismic Solutions, a seismic data consultancy, recently discovered a particularly active flaw in this area in collaboration with researchers at Caltech. The result highlights the difficulty emergency managers, city planners and engineers face in identifying potential hazards when planning future earthquakes.

Identifying defects near the surface

A high-density seismic survey of the subsurface was conducted in early 2017 over approximately 72 square kilometers of Long Beach and Seal Beach. A total of 5,354 sensors continuously recorded ground movements in the area for eight weeks.

The subsurface data showed several faults that had not previously been identified. These shallow faults extend up to 300 feet (90 meters) from the surface, but human activity has obscured significant fault information higher up. Our observations in the area suggest that relatively recently these faults also deformed sediments near the surface, suggesting that these areas, shown in red on the map below, may be subject to persistent deformation. While it is impossible to predict when or how likely these faults will move in the future, this data suggests that they are active. 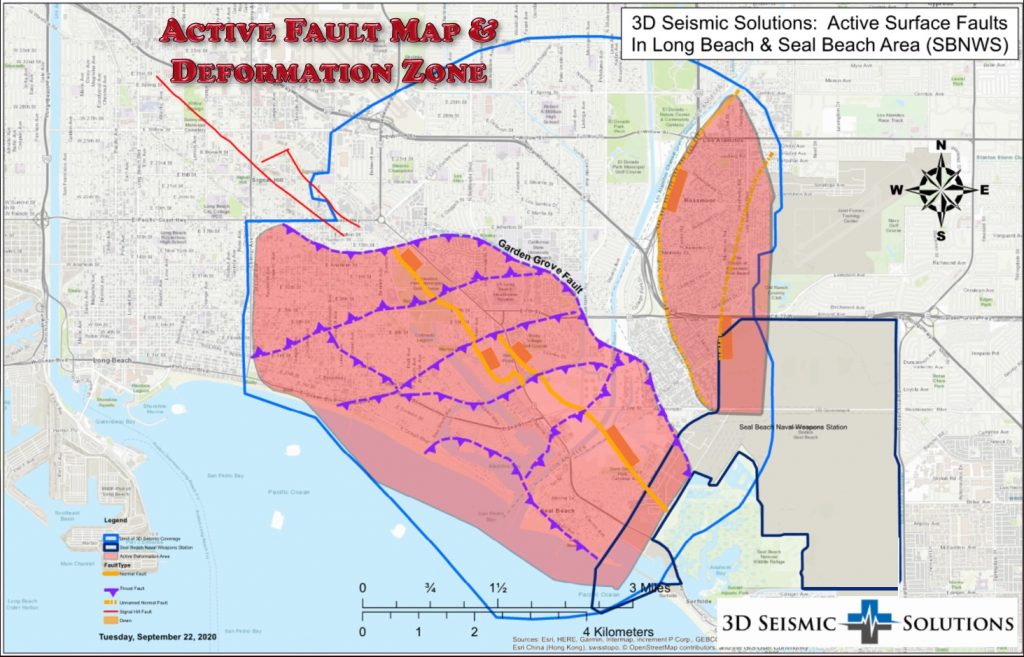 In addition to impacting seismic waves from the vibrating trucks, the sensors detected more than 3,000 micro-earthquakes during the eight-week period. Microseismic events are small earthquakes that are imperceptible to humans, even if they are directly on the epicenter.

Seismic sensors record these tiny events that occur along faults as they slide or crawl. These micro-earthquakes pose no threat and can even help scientists pinpoint otherwise hidden faults.

Caltech researchers plotted the epicentres of the microseismic events on our map and found that many of the events occurred in a cluster along a stretch of coast near one of our newly mapped faults. The micro-earthquakes occurred between several meters and more than a mile (several meters to two kilometers) below the surface, which is consistent with the inferred depth of this fault. The strong correlation between the events and the fault location indicates that the fault was active during the eight-week period in which the sensors were in use.

If the events were related to human activity, such as construction or drilling, they would likely be scattered across the city. However, if it is seismic noise related to waves on the beach, we would expect it to be present along the entire coastline. However, the linear cluster does not extend north of the San Gabriel River; it ends abruptly at a point where the newly mapped fault bends inland.

Correlation of Caltech’s microseismic events with the 3D Seismic Solution’s fault map. Remapped faults in purple, Newport-Inglewood fault traces in red, and black dots represent the microseismic events that occurred to a depth of more than a mile (two kilometers) below the surface.

Earthquake hazard due to unknown faults

The Alquist-Priolo Act was created after the 1971 San Fernando Valley earthquake, which caused widespread damage to structures when the Sierra Madre Fault slid to the surface. The intent of the law was to reduce earthquake losses by regulating development near active surface faults. However, as the Long Beach earthquake of 1933 and more recently the Northridge 6.7 magnitude earthquake demonstrated, severe damage can occur even if a fault does not break through to the surface.

One of the major challenges in assessing seismic hazard is identifying subterranean faults and knowing how the fault is traveling. Faults that are difficult to spot in a landscape, either because they do not reach the surface or because signs of dislocation have been paved or otherwise removed, can be difficult to identify without a detailed examination of the subsurface. Such faults can still be dangerous and occasionally slide in a major earthquake, surprising seismologists. The devastating Northridge earthquake itself struck a previously unknown thrust fault, highlighting the risk of hidden faults in the area.

Understanding the complex structure of the subsurface and the location of the many faults is crucial for assessing potential earthquake risks. Currently, the Seal Beach area has the only identified Alquist-Priolo Zone along the Newport-Inglewood Fault. The seismic data shows that there are other shallow faults, some of which are currently active. High density seismic surveys give scientists, city planners and emergency managers a better understanding of the dangers in the Los Angeles Basin. Emergency planners are very interested in locating errors that cross planned evacuation routes, as well as first responders and important infrastructure locations.