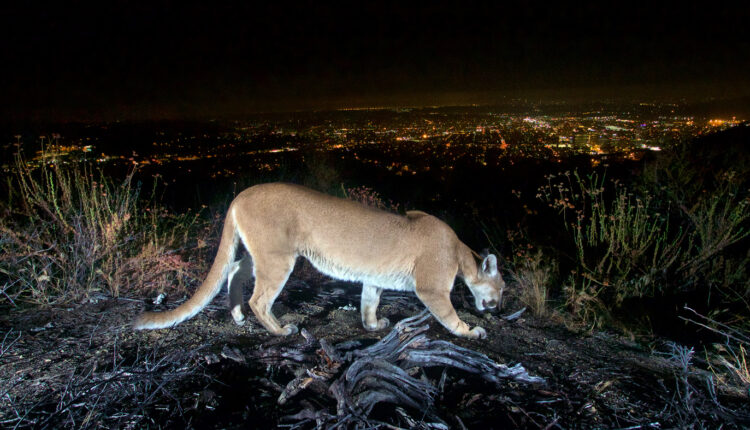 A mountain lion photographed with a motion sensor camera in the Verdugo Mountains overlooking the city lights of Los Angeles. New money for wildlife crossings will help animals whose habitat has been cut by roadways. National Park Service hide caption 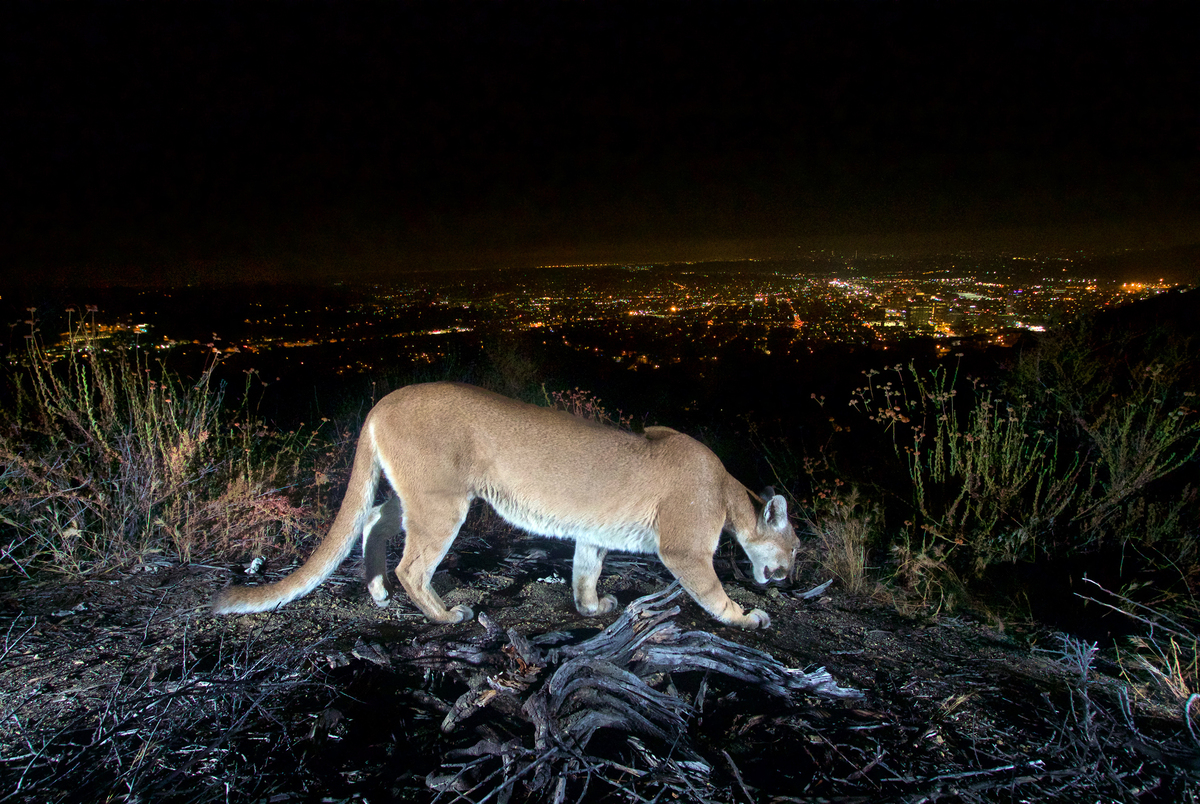 A mountain lion photographed with a motion sensor camera in the Verdugo Mountains overlooking the city lights of Los Angeles. New money for wildlife crossings will help animals whose habitat has been cut by roadways.

Just outside of Los Angeles, in one of the most human-modified parts of the planet, a rare coastal ecosystem is being pinched against the Pacific Coast. The mountain range is home to one of the highest concentrations of threatened and endangered species in the country.

And some are suffocating.

For the better part of the last century, the Santa Monica Mountains have been effectively cut off from the larger world, hemmed in by seawater and sprawl. Highway 101, carved across the range’s northern foothills, “has become this impenetrable wall for wildlife,” said Beth Pratt, California regional executive director for the National Wildlife Federation. “And both plants and animals need movement to be resilient and survive.”

This spring, Southern California construction crews are expected to break ground on a solution: A 200-foot long bridge, complete with light deflectors, noise suppressors and nursery-raised willow saplings. The wildlife crossing will be the biggest and most expensive of its kind, spanning ten lanes of snarling traffic and reconnecting a severed landscape.

Highway 101, carved across the Santa Monica Mountains northern foothills, “has become this impenetrable wall for wildlife,” according to Beth Pratt, California regional executive director for the National Wildlife Federation. The image on the right illustrates a 200-foot long bridge crossing which crews will begin constructing in about a month.

“You’re going to see this ecological transformation,” said Pratt, who’s spent the last decade fundraising for the project. “And that part of it is going to be over one of the busiest freeways in the world — that, to me, is just such a hopeful statement for what’s possible.”

“We can redeem a freeway.”

Wildlife crossings, like the kind planned at Liberty Canyon in Agoura Hills, have been shown to help species navigate a fragmented world. There are roughly a thousand such structures in the US, according to crossing advocates. Bridges, underpasses, culverts and tunnels.

In Wyoming, overpasses are helping maintain a 6,000 year old migration route for pronghorn.

And in Utah, overpasses allow large mammals like moose to move across major freeways.

Underpasses and culverts in Florida allow otters and alligators to move between habitats.

Soon there could be more. For the first time ever, Congress has made a major investment in wildlife crossings, allocating $350 million in the recently passed bipartisan infrastructure package for a Wildlife Crossing Pilot Program that will help fund projects in all 50 states.

“Unlike so many issues that we face today, there are actually these solutions to making roads safer for people and wildlife,” said Renee Callahan, executive director of ARC Solutions, a group that researches and promotes crossings. “And we could build them tomorrow.”

Millions of miles of roads are helping drive animals to extinction

Up to 1 million species are at risk of extinction — many within decades — because of human activities. Climate change, development, pollution, deforestation, overfishing and hunting are all driving the crisis.

Roads are a major part of that.

It’s estimated that as many as 1 million animals are killed on US roads every day. And it’s not all squirrels and deer. A report by the Department of Transportation identified 21 federally endangered or threatened species that are being directly imperiled by our thoroughfares, including the desert tortoise and the Florida panther.

Just look at a road map of the US The landmass is criss-crossed and bisected, fragmented like a fractured windshield, by more than 4 million miles of roads.

“There’s not much land that’s not affected in some way by roads and traffic,” said Marcel Huijser, a road ecologist at the Western Transportation Institute at Montana State University.

For many species and people, the impact is quite literally direct. But roads can also kill in more subtle ways, degrading habitat on either side of their path and blocking movement.

Along Highway 101, in Southern California, the latter is driving extinction.

Last year, mountain lion researchers started noticing something troubling in the big cats they were studying in the Santa Monica Mountains. Mountain lions were seen on game cameras and in person with kinked tails. Others were experiencing something called cryptorchidism, where one or both of their tests failed to drop during puberty.

Audra Huffmeyer, a researcher at the University of California, Los Angeles, went a step further, completing post-mortem analyzes for five deceased males. “All five individuals we sampled were exhibiting what we call teratospermia, which is a form of reduced fertility,” she said.

The findings were the first documented reproductive signs of inbreeding in the area’s long-isolated cougars. Mountain lions, sequestered in the 40-mile long mountain range, were mating with close relatives. They had been for some time.

Roads fragment the habitat of mountain lions of the Santa Monica Mountains, affecting them in both direct and indirect ways. 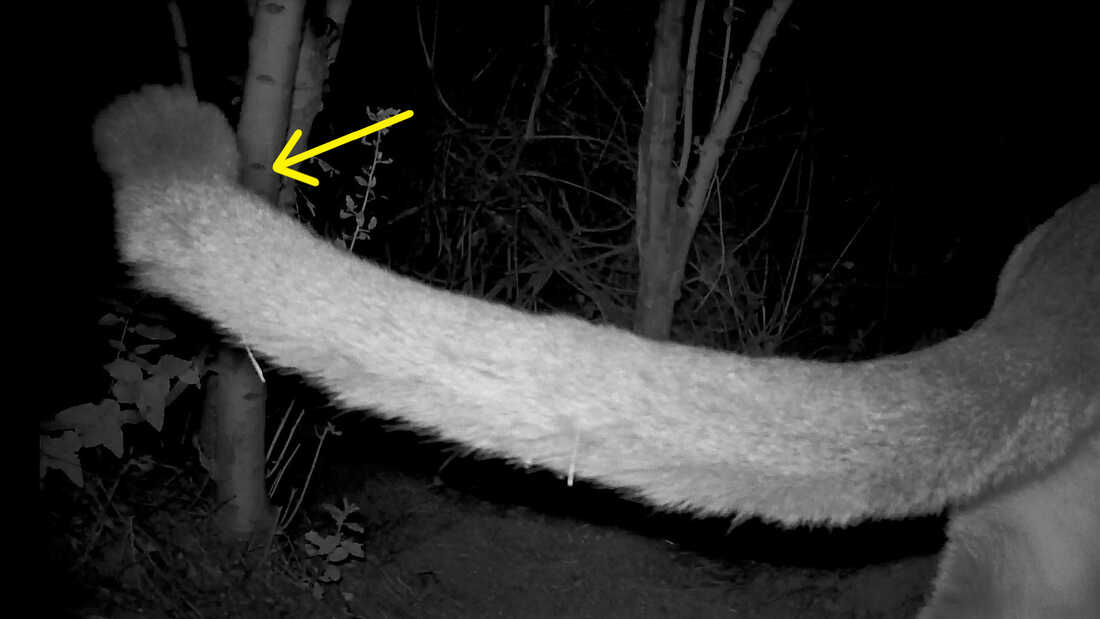 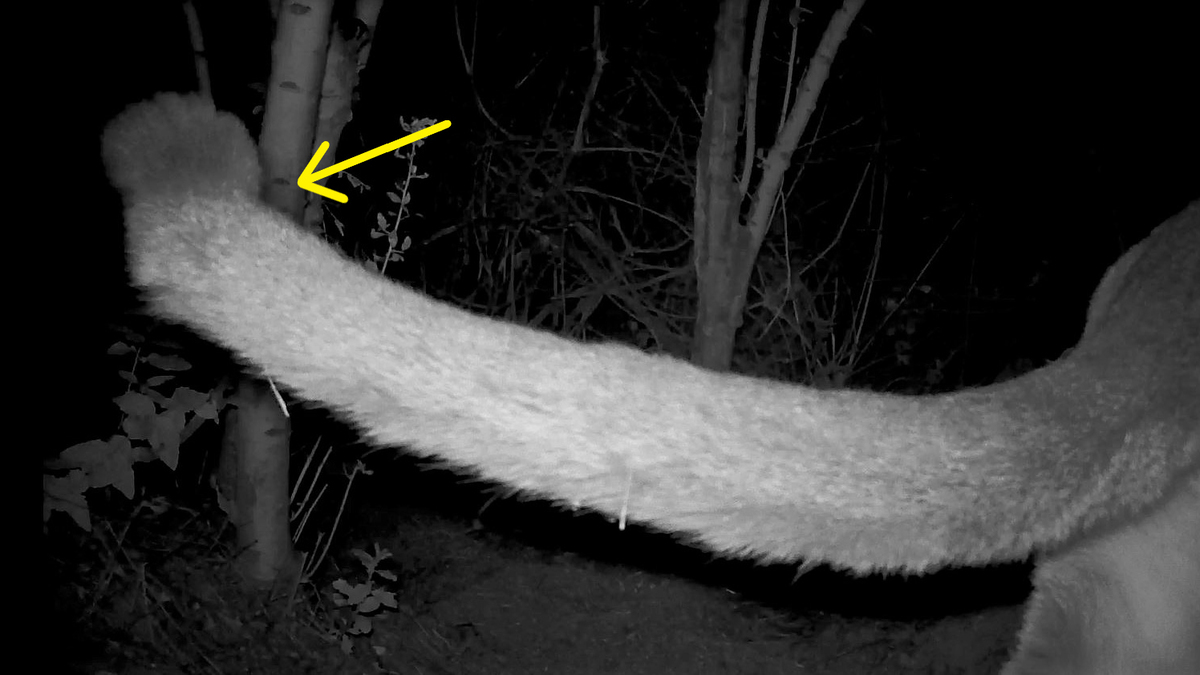 It wasn’t a surprise. Researchers had watched collared mountain lions approach Highway 101, intent on crossing from the Santa Monica Mountains to more habitat in the Santa Susana Mountains to the north, only to stop and turn around, scared off by the cacophony of the road.

“We’ve known that there was low genetic diversity,” said Seth Riley, a wildlife ecologist with the National Park Service. “I mean, we knew even before we started the studies that that was sort of a possibility. But we were kind of hoping not to get to the point where we’re starting to see these physical manifestations.”

“It definitely ramps up the urgency of doing something about it.”

The wildlife crossing at Liberty Canyon should help. It’s being designed to give mountain lions and other species an inviting escape valve, connecting isolated populations in the Santa Monica Mountains with the larger world.

It’s estimated that as many as 1 million animals are killed on US roads every day, making safe crossings important for the survival of several species. FDOT hide caption 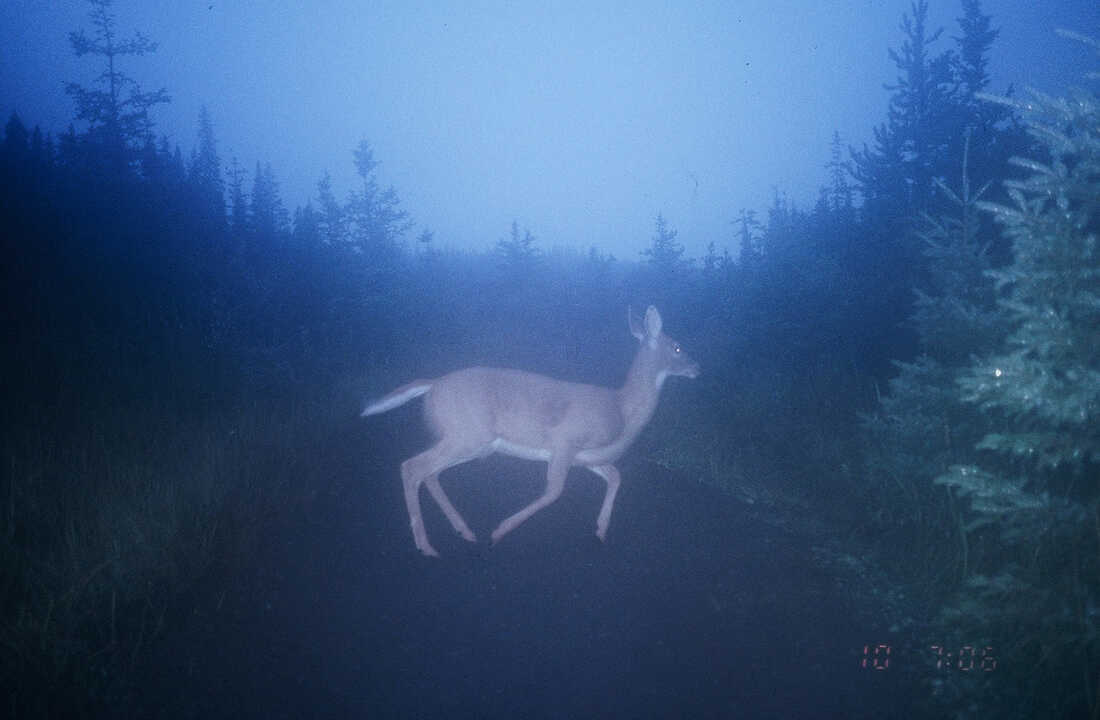 Wildlife crossings and associated infrastructure like roadside fences have been shown to reduce animal-vehicle collisions by 97 percent. They can help prevent the 30,000 roadside injuries and 200 deaths that happen every year when drivers hit wildlife. Western Transportation Institute at Montana State University courtesy of ARC Solutions hide caption

Wildlife crossings can also be safer for humans, and save money

A survey of nearly 500 state and federal transportation workers by the Western Transportation Institute and ARC Solutions found that the biggest challenge to getting more wildlife crossings built is funding.

Wildlife crossings are expensive. The crossing at Liberty Canyon is expected to cost $87 million.

But until Congress’s recent investment, they haven’t gotten the same dedicated funding as other infrastructure problems like decaying bridges and potholes, said Montana State University’s Huijser.

Transportation agencies in the US tend to prioritize projects that immediately address human safety. But Huijser said there’s a compelling economic argument to build more. “The problem with thinking it’s more expensive to pay for these [wildlife] projects is that it assumes there’s no cost to doing nothing,” he said.

A 2008 study by the Department of Transportation found that animal-vehicle collisions cost Americans $8 billion every year in property damage and associated healthcare costs. In today’s dollars, Callahan said, it’s closer to $10 billion.

“It’s basically like we’re taking that money and lighting it on fire every year,” Callahan said.

Wildlife crossings and associated infrastructure like roadside fences have been shown to reduce animal-vehicle collisions by 97 percent. They can help prevent the 30,000 roadside injuries and 200 deaths that happen every year when drivers hit wildlife.

Wildlife advocates like Pratt believe that Congress’s recent investment in wildlife crossings is a sign that decision makers are starting to recognize those benefits. Her hope is that money for wildlife-oriented structures is embedded in future infrastructure budgets from the start.

“So many of the environmental problems we work on, like climate change — they’re hard to solve. There’s no magic solution,” she said, looking at the sun-baked peaks of the Santa Monica Mountains from Agoura Hills. “There is a magic one here.”

“This is a problem we actually can solve fairly easily. It just takes money.”