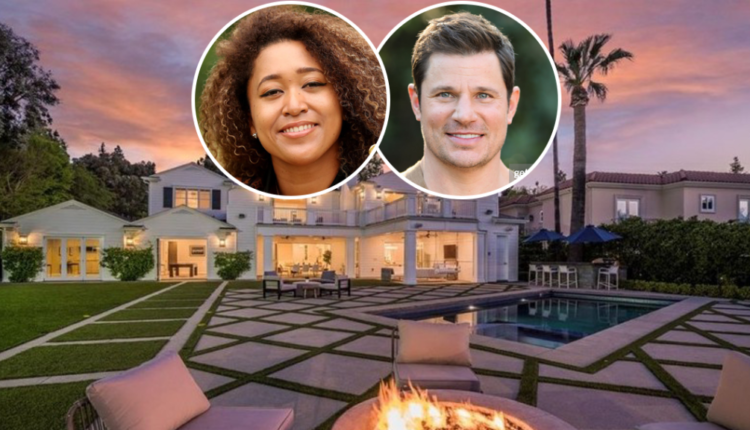 Naomi Osaka appears to have a thing for buying the homes of pop music stars. Astute real estate watchers will recall that nearly three years ago, back in July 2019, the tennis superstar shoveled out $6.9 million to buy the modernist 90210 digs of “Jealous” singer Nick Jonas.

Now Osaka has shifted her real estate gaze to the San Fernando Valley, where records confirm she’s somewhat surprisingly splashed out $6.3 million for a different Nick’s lavish mansion. This time, it’s 98 Degrees boyband singer Nick Lachey, perhaps best known for his marriage to Jessica Simpson and for co-hosting Netflix’s “Love Is Blind” with his current wife, Vanessa Lachey. The deal was inked off-market, but the sale price would seem to be a nice profit for the Lacheys, who only lived there for a year — the couple bought the house back in late 2020, during Covid quarantines, paying about $5.1 million.

Built new in 2015, the East Coast traditional-inspired mansion already boasts an impressive celebrity pedigree. In 2018, it was sold for $4.8 million to Randall Cobb, the star NFL wide receiver who currently plays for the Green Bay Packers. It was Cobb who flipped the place, barely two years later, to the Lacheys at a modest profit.

And though she’s only 24, rest assured that Osaka can well afford her real estate indulgences. Forbes estimates the Japanese former World No. 1’s income topped $60 million in a single year alone, making her the highest-paid female athlete of all time. Notably, less than 10% of her income came from on-court winnings; Roughly $55 million of that haul was instead due to her incredibly lucrative endorsement deals, including contracts with Nike, GoDaddy, Levi’s, Nissan, TAG Heuer, Louis Vuitton and Mastercard. And those are just some of their sponsors.

Born in Japan to a Japanese mother and Haitian American father but raised primarily in the United States, Osaka boasts a unique multicultural appeal and has thus been one of the world’s most marketable athletes since the early days of her career. In 2019, she hit #1 in the rankings; Since then, she’s been open about her personal struggles and famously withdrew from the French Open at the last minute, citing mental health concerns.